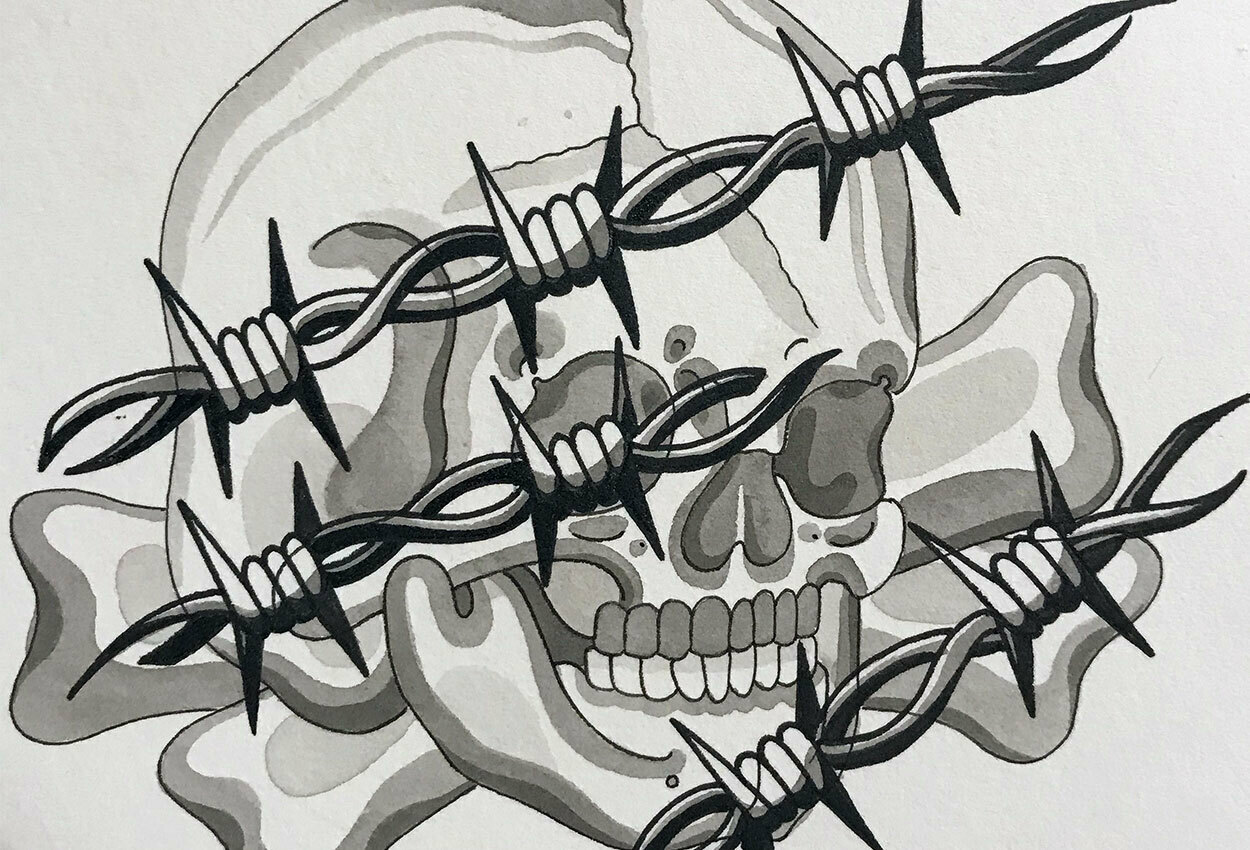 Heart inked into your sleeve.

Ian Christensen has lots of tattoos. Or maybe just one, as they have all joined together!

Growing up in Traralgon, tattooing was pretty far from any aspect of my life. But it crept a bit closer with the music I grew up on... heavy metal! Tattoos and metal just went hand-in-hand, and so I began tattooing in 2001.
—

I started off with some luck, a lot of passion and no real idea where it would take me. Tattooing was still a bit frowned upon back then, pretty underground and just for ratbags, really. I feel pretty blessed to have been able to make a living from tattooing during a time where it shifted from being pretty lowbrow and not really considered artwork, to the heights it’s reaching now.

Tattooing has taken me all over the world. I originally learned to tattoo in St Kilda, but after three years the road called me. I’ve tattooed in Belfast, London, Milan, Eastern Europe and all across America: from Washington DC to Alaska and everywhere in-between. I even did a stint in South Korea (where tattooing is still illegal!).

Over the years, tattooing has brought me in contact with the most exciting people and put me in amazing situations. It’s given me everything I have. I have more stories than I can remember and plenty I can’t repeat. I will never be able to pay back what it has done for me but I have tried, through dedication and hard work, as well as self-publishing two books on tattooing. Both books have sold out and copies are stored in the National Library of Australia as they’re considered culturally significant.

After years on the road, I now call Legacy Studios in Phillip Island my home. Nearing 20 years into this career, I don’t feel like slowing down but I’m loving being in a slower town (although, summer is pretty wild) and being able to really focus on each tattoo and paint more. I also enjoy getting into my garden when I’m not working — I’m turning into my Dad!

Tattoos have been used to literally mark key moments in our lives for as long as we could first permanently mark our skin. That’s a pretty long time! People get tattooed for so many different reasons, but it’s nearly always important, and it’s often to celebrate. A tattoo can represent something as serious as life or death, or as trivial as a football match (life and death for some). It can be to remember a holiday, celebrate a divorce or for any number of milestones. Tattooing over self-harm scars can be a celebration of life, of beating your demons. Tattoos are about owning your body, loving your friends, remembering your pets or your connection with nature. It could just be a celebration of tattooing itself!

I saw tattoos as part of my journey. They were integral to my growth as I learnt the craft and developed as an artist. Photos get lost and files get corrupted, but tattoos are very hard to lose. Similar to photography, tattoos hold so much more meaning than just what they visually impart.

The most asked question for me has always been, how many tattoos do you have?

The second most is, what’s the weirdest tattoo you have done?

It’s a hard question to answer because nothing seems that weird once you build a bit of a rapport with the client. So when I tattooed little scissors and cut dashes, like when a box says “cut here”, on the webbed toes of a young man, it wasn’t weird. Instead, he was embracing something that made him unique.

There are childlike tattoos that pop up every now and then. Ones that make you think, “I could draw that” or “That looks like a kid drew it”. A kid did draw it. It was their kid that drew it, and if that’s not a celebration of life, then what is?

Tattoos are trivial and meaningful. They are serious and they can be the complete opposite. They are a celebration — a very permanent one.

To quote legendary tattooer, Lyle Tuttle, “Tattoos aren’t for everybody and they’re too damn good for some people”. All I know is they are pretty bloody special, if you ask me.

To answer the first question... I have lots of tattoos. Or maybe just one, as they have all joined together!

—
You can see more work by the talented Ian Christensen at @bugsybugsy on Instagram and Legacy Studios in Cowes, Phillip Island — legacystudiostattoo.com