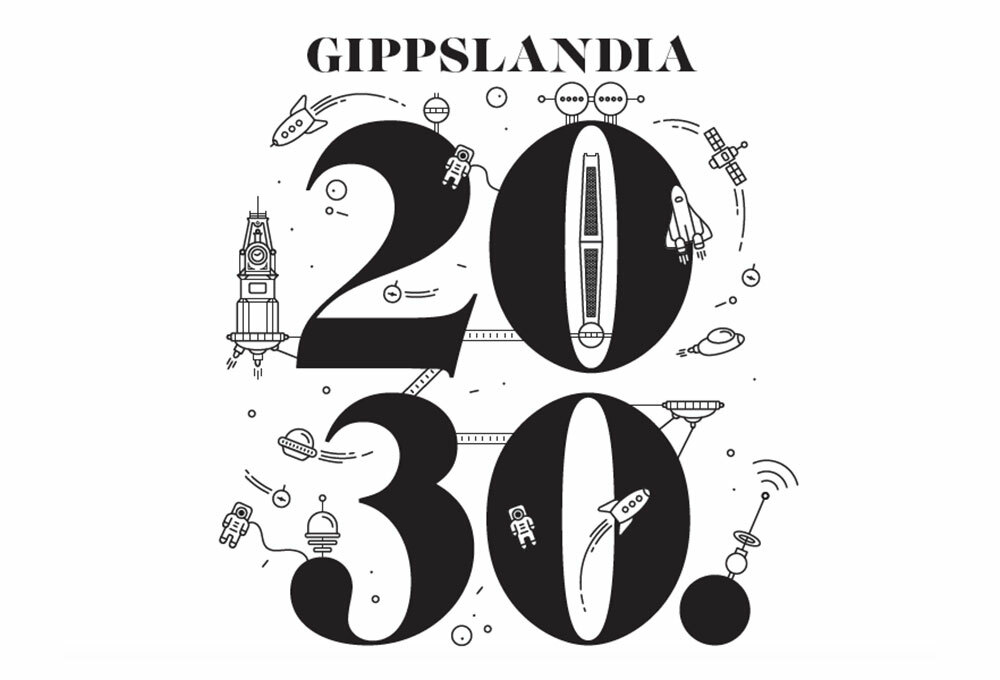 By 2030, not only has Gippsland found its feet, but became a high-growth region of national importance...

It’s 13 years since Engie closed Hazelwood. In the years directly following its closure, there was some uncertainty and some wobbles in the outlook for the Latrobe Valley and, unfortunately, the region as a whole. Yet, as we entered the 2020s, Gippsland not only found its feet, but became a high-growth region of national importance and an internationally-renowned example of a ‘just’ transition from traditional fossil fuels and industry.
—

Three years ago, Gippsland celebrated the fact that it’s now home to regional Australia’s first tech ‘unicorn—a startup company valued at over $1 billion. The tale of its formation is now the stuff of tech lore; as Gippsland embraced the diversity of its population and nurtured an inclusive startup community, a young software coder (who underwent gender reassignment surgery) developed a platform that’s become one of five most profitable social enterprises on the planet.

The application, The Green Line, links farmers with environmental groups and large corporations; its highly-sophisticated AI (that’s Artificial Intelligence, not Artificial Insemination) recommends locations in existing agricultural land where vegetation corridors would benefit local species. The corporations then invest in planting and maintaining the required vegetation in exchange for carbon credits or to achieve their environmental obligations. The system has continuously provided higher yields for the farmers involved, increased local flora and fauna populations and companies have an effective and simple method to fulfil their requirements. The AI can analyse LIDAR datasets to determine areas of erosion or water catchments that may require specific planting, recommending indigenous plant species and a maintenance program. Its ability to assist in addressing food production for the rising global population, climate change and natural ecosystem improvement has seen The Green Line rolled out across the world. The 500th staff member recently joined their Morwell headquarters.

It’s widely acknowledged that ‘unicorns’ don’t appear out of thin air. The concurrent opening of the Gippsland Hi-Tech Precinct, a partnership between Latrobe City Council, Federation University, Federation Training, Latrobe Valley Authority and Regional Development Victoria, and the establishment of a permanent Workers’ Action Centre in 2020, assisted in re-training former Hazelwood staff and provided an introduction of additive manufacturing techniques and cutting-edge engineering processes into the region. Many former Hazelwood colleagues went on to establish small businesses together. Inadvertently, as these workers discussed what they were learning in these programs with their families at home, they promoted a growing culture of innovation, which then permeated into the region’s secondary schools.

In the last five years, a number of these small businesses have matured and transformed from single owner/operators to employing between 10–40 staff members. This is also true of many online-based businesses that were launched by Gippsland mothers in the same period. Some have remained niche, sole operations, but several, like Warragul’s Friendie Audio Pty Ltd, are nationally-recognised businesses.

Regional tech incubator, Runway Geelong chief executive Peter Dostis, was correct in believing regional areas create better business owners due to the greater challenge of running startups outside of major cities, stating, “They have less opportunity than someone in Melbourne does, and that fires innovation and creativity. They’re all thinking, ‘what can I do so I don’t have to commute to Melbourne every day?’”. Adding, “Creativity needs a bit of adversity to come out sometimes”. But this was in 2018, now in 2030 people are commuting to Gippsland to develop their startups.

After a highly successful follow-up event in 2 018, the Gippsland-based technology conference Binary Shift continued to grow and promote events like GovHack, SheHack and Girl Geek Academy — improving the awareness of coding and tech in the community each year. This slowly had a challenging influence on Wagga Wagga, NSW, which was seen as the hub of Australia’s ‘Silicon Paddock’, with the success of The Green Line knocking them off the perch for good.

The single most transformative development was the 6,000 ha (14,800 acres) Great Latrobe Park that has reimagined and rehabilitated the former mining sites. Conceptually similar to, but larger in scale than, Eden Park in the United Kingdom and Duisburg Nord Landscape Park in Germany, the foundations of the project were undertaken from 2020–2030. With parklands and a massive arboretum, there’s space for forestry, agritech and biotech startups to explore different crops for their projects. A kombucha-based leather company has now superseded Queensland’s crocodile farms as Hermès preferred leather supplier for all their handbags.

The former mine site isn’t entirely remodelled as park and ‘green labs’, but features some of the most desirable housing in Victoria. This is due to the development’s access to world-class parklands and lakes and a view that overlooks them, as well as the fact that this originally experimental township has Australia’s fastest internet speeds. This has resulted in more home businesses per capita in this zone than anywhere else in the country. That’s not all...

In 2020, the Federal Government offered $5 million to the five most promising experimental energy generation startups and another $5 million to the winner of the competition. The winner and two of the other shortlisted candidates were based in Gippsland and devised their connections to the Victorian electricity grid via the refurbished infrastructure remaining at the former plants.

The Government’s hunch proved to be correct; there’s no way that Tesla could ignore the opportunity to collaborate with the new energy startups. After South Australia, Tesla had been eager to expand its influence and markets in Australia, but hadn’t found a site—there’s no way Elon Musk’s ego could miss out on constructing his newest manufacturing plants and ‘big battery’ on top of a regenerated brown coal mine!

Many multinational companies have relocated their Victorian or Australian headquarters to the vicinity of the Great Latrobe Park due to the sought-after lifestyle opportunities for their employees and as means to spruik their green credentials.

Gippsland was the first location outside of North America to release Tesla’s electric trucks as part of a collaborative project with the Food Agility CRS. Images of the Tesla trucks with the new, unified ‘Gippsland Produce’ logo emblazoned across their trailers, transporting the finest vegetables from the Mitchell River Plains to Melbourne were seen on news services around the globe.

Larger tech companies are rumoured to be moving to the region as well. Rather than the regrettable sense of desperation that had previously wafted the air at pitches between government and big business, there’s a greater sense of confidence and self-assuredness—this also continues to stoke civic pride in the community.

With Gippsland’s food network improving by leaps and bounds, it would be remiss to neglect another foundation of the area’s prosperity—forestry. The prefabricated housing industry in Victoria has continued to grow over the past 10 years, as the demand for more affordable residential housing in Melbourne has remained steady. Two companies are creating pre-fab houses and housing components for leading architects. The most substantial injection for the industry was the highly successful six-storey wooden apartment buildings at the former milk factory site in Warragul and the former brickworks in Drouin (adjacent to the vibrant co-working space established in the Old Butter Factory). Both sites were originally immensely attractive to young professionals commuting to Melbourne for work, hence, these multi-zoned timber high-rises were developed, with similar proximity to the railway line, in Longwarry, Bunyip and Yarragon. The State Government passed legislation in 2022, stating that 15% of new developments between three and eight storeys must be constructed from renewable timbers. Many developers were already pursuing these timber construction methods due to the worsening global shortage of sand suitable for concrete. Gippsland companies are competing with the Scandinavians as to who builds the highest-quality wooden high-rises.

Not only have the towns around the railway line adapted to new realities, but Gippsland’s transport nodes have changed as well. The Bass Coast and Wonthaggi have continued to boom; their populations frequently utilising the new V/Line service into Melbourne for work. The international airport at Koo Wee Rup will shortly begin services to Asia (amusingly, improved access to the Phillip Island fairy penguin parade caused this project to be fast-tracked at the insistence of China’s Xi Jinping in the mid-2020s). Travel between Gippsland hubs has dramatically increased as well. The Great Latrobe Park has resulted in a new V/Line track that diverts from Moe and re-joins at Traralgon, linking the community surrounding the park, Morwell and the Latrobe City Airport. It’s possible to get from the Great Latrobe Park to Melbourne in 45 minutes using the train to the Latrobe City Airport—faster than a commute from anywhere but the inner Melbourne suburbs. The trip to Sydney also takes less than an hour. It’s little wonder that so many innovative companies are basing themselves in Gippsland.

The number of Gippsland towns with populations of less than 1000 people remains unchanged, and they still have their incredible individual charm, but their ‘liveability’ has been improved due to better transport and communications links. Surveys conclude that the sense of community has actually been enhanced. Tourists from Melbourne are still loving each of these little towns for weekend escapes, depending on whether they want a hit from the forest or the ocean.

Victoria is renowned as a leading health research hub. LaunchVic’s plans to improve the conversion rate of health research into viable healthtech businesses have come to fruition, and it is a vibrant ecosystem that’s proven very beneficial for the state. Gippsland has cultivated links between these companies, the Latrobe Regional Hospital and the region’s many vibrant retirement villages. This has facilitated world-leading research that’s, somewhat ironically, focused on indefinite life extension sciences and palliative care.

The improved health care research facilities and Gippsland’s passion for sport, has enticed more fitness-related startups to the area. This has marginally increased the number of national sportspeople coming to the region but has more significantly increased the motivation of those competing in the local sporting leagues. In fact, if the AFL upholds its expansion plans for the next five years, there’s likely to be a Gippsland AFL team in 2035. The naming of the club has been one of the largest concerns the region’s had in the last couple of years, as it enjoys being a national success story.

With fine foresight, Federation University opened an ‘arts tech’ residency and research laboratory at their campus in 2025. They welcomed local artists and global leaders to ideate on boundary-bending, technologically-advanced art pieces. Amsterdam-based artist Diana Scherer leads a research group on growing textiles with plant roots—sprouting an amazing biotextile program. There’s progressive work coming out in the agritech, healthtech and biotech fields, as well as creative data mapping, projections, augmented reality storytelling and virtual reality gaming. The local galleries never have to worry about running out of local artistic talent to showcase.

By building on the region’s strengths of people, food and fibre; the environment and committing to large-scale and innovative interventions while building successful smaller programs, Gippsland has been given a restart that has turned it into the place to be.

—
Gippslandia would like to thank Dr Elena Kelareva at GippsTech, Dr Kate Cornick at LaunchVic, Professor Peter Fairbrother and Val Prokopiv at RMIT, Jenni Hardy at the Latrobe Valley Authority, Jackson Irwin at startup Honee, and Pause Fest 2018 for their conversations, knowledge and insight that have contributed to the information included in this piece.