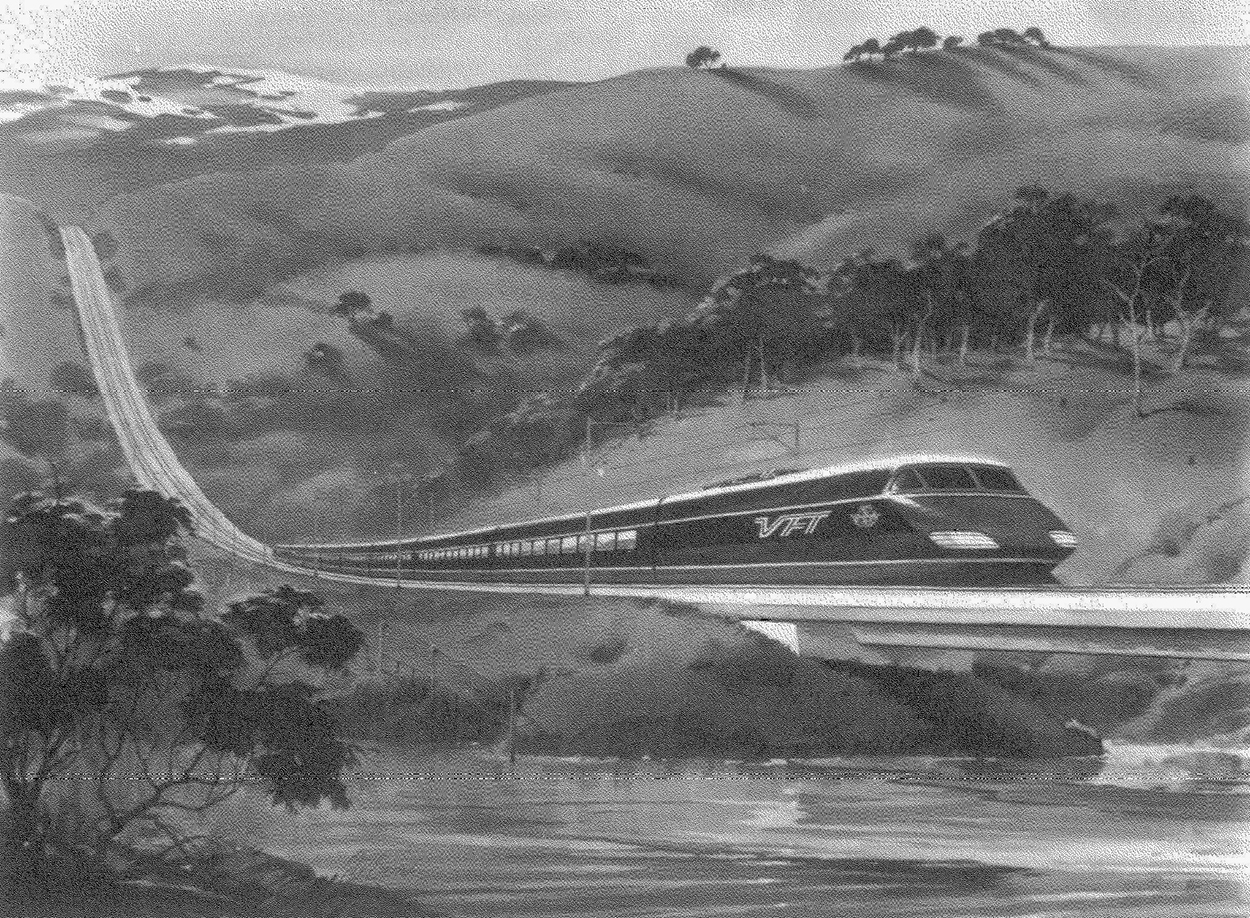 Getting progress back on track.

Looking at the origins of Gippsland fast rail - where it disappeared & can we get the rail we need?

“The Very Fast Train would be a completely new high speed rail system between Sydney, Canberra and Melbourne. Speeds of up to 350 km/h would allow non-stop travel times between Canberra and Melbourne, giving an overall time of three hours between the two state capitals…(it) would make it among the largest projects ever undertaken in Australia and it would have a major beneficial economic impact…stimulate economic development…and more balanced regional growth.”
—

The above excerpt comes from a remarkable set of papers instigated by the Chairman of the CSIRO from 1978 to 1985, Dr John Paul Wild. Dr Wild had previously built his academic reputation in the fields of radio astronomy, solar physics and microwave navigation. Then, as the tale goes, in 1983 Dr Wild was eager to ride the XPT rail link from Canberra to Sydney as it promised travelling speeds up to 160km/h. While the train did briefly reach the hyped top speed, the rest of the journey was anything, but fast, leaving Dr Wild underwhelmed and deflated. But by all accounts, Dr Wild was a ‘doer’, and so rather than writing a scathing post on his Facebook news feed, he set about researching the potential of an east Australian rail link that could compete with air travel. His goal was to complete the journey from Sydney to Melbourne in three hours, which would require a train that could reach speeds of 350km/h – an optimistic target, but, as Dr Wild and colleagues proposed, one that wasn’t out of reach thanks to the examples provided by the shinkansen train fleet in Japan and the TGV trains in France, which were achieving speeds of 270km/h.

In a note presented by pragmatic Minister of Science, Barry Jones, to the then Prime Minister, Bob Hawke, Dr Wild presented the following poignant argument about the project:

From Sydney to Canberra much of the route would be similar to that of the Hume Highway. From the national capital it proceeded south – paralleling the coast, generally about 70 kilometres inland – via Cooma and Bombala to Orbost; then west to Melbourne, very close to the coast. This route was chosen because it would provide better access for people in the coastal southeast of New South Wales and eastern Victoria, who were very poorly served by transport links. Further, it would encourage decentralisation more than a wholly inland route would, because about 80 per cent of Australians choose to live within 50 kilometres of the coast.

Dr Wild must have had such conviction in the project, as he retired from the CSIRO in 1986 to lead the Very Fast Train Joint Venture. The next set of substantial research documents concerning fast rail between Melbourne and Sydney were published in the very early 1990s and they outline the collapse in political will for the project.

Nearly 30 years later and eastern Victoria is still poorly served by transport links, the public continue to demand improved railway lines to Melbourne (it was the most requested project at Gippsland Regional Partnership’s first Regional Assembly in November 2016, and consistently tops local government surveys throughout Gippsland as the major priority for the constituency), our trains still struggle to reach 160km/h and the State and Federal Governments are yet to reach an agreement on a solution.

This rail link (Gippsland to Melbourne) is vital to economic efficiency and social inclusion in the
region. However, the Gippsland line has been neglected compared to other regional mainlines in Victoria; infrastructure is inadequate and service levels are poorer in regard to journey times, reliability and frequency. Passenger trains operate at the lowest average speed of any Victorian mainline, and journey times have deteriorated significantly since 2001, for example, the journey times from Warragul to Melbourne are now typically 10-15 minutes slower than in 2001.

Recent investments in regional rail upgrading in the State have excluded Gippsland. Although the Regional Fast Rail (RFR) project increased speeds on parts of the Gippsland line, these benefits have been more than offset by slower journeys through the metropolitan area. 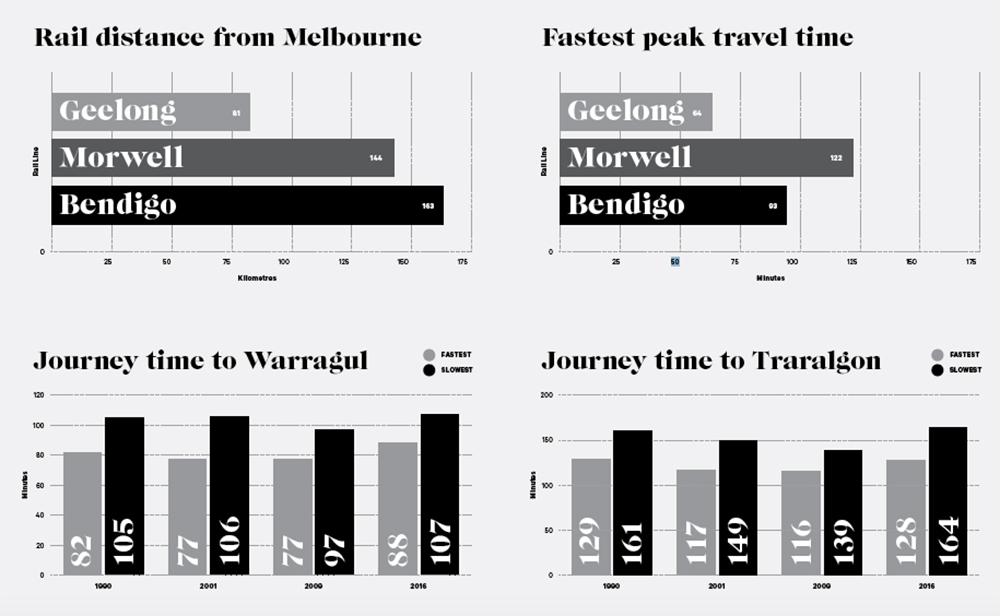 I beg your pardon? Gippsland’s rail services have actually gotten worse in the past 16 years?! While hundreds of kilometres of fast rail have been laid across Europe and Asia – where operational speeds of 270-300km/h are commonplace. While, more frustratingly, the rail networks into Melbourne from comparative regional centres, such as Geelong, Ballarat and Bendigo have already achieved the 160km/h milestone and are pushing on for the delivering of 200km/h services.

Yes, at Gippslandia, we focus on promoting positivity. But after reading through Gippsland Rail Needs, which is, “intended for consideration by Gippsland councils and to form the basis of advocacy to Government”, we were increasingly perturbed by the fact that as our region is home to relatively “safe” seats in State and Federal Governments, we’d been overlooked for vital infrastructure upgrades. Whereas, the “squeaky wheel gets the oil” as the oft-quoted phrase goes.

All Gippslanders understand the immense value of improved rail links with Melbourne. Whether it is an easier commute for work, improved access to health and medical facilities, an opportunity to enjoy entertainment options that aren’t available locally or furthering our education. For regions like South and East Gippsland, where previous rail networks have been substantially deteriorated or even ceased operations entirely, the lack of transport options is further pressing. The passionate civic groups, such as the South and West Gippsland Transport Group and the Gippsland V/Line Users Group, are tangible manifestations of the aspiration for improved rail services.

The first stage of recommendations in Gippsland Rail Needs aims to, “bring Gippsland’s rail and the public transport network generally to a standard that meets contemporary needs and expectations of residents and visitors”. That’s right, the initially proposed $500m worth of works is to bring Gippsland’s rail network up to a level that’s acceptable for today, not to develop for projected future use. According to sources, the State Government was able to price the completion of the same works for $435m. This was to be offset from bonus the Federal Government offered for the sale of public assets. In this instance, the bonus from the recent nearly $9.7b windfall from the lease of the Port of Melbourne was set to fund our rail works, but, allegedly, the Federal Government claims that the State Government didn’t process required paperwork correctly and there’s now a $145m shortfall. Apparently, conversations between the relevant Ministers are ongoing.

Yet, even with a regional rail upgrade for Gippsland, there still may be a bottleneck at Pakenham and then again between Dandenong and Caulfield, as Gippsland Rail Needs highlights, “Track configuration between Dandenong and Melbourne is the biggest single factor inhibiting the introduction of fast, reliable and frequent rail services to Gippsland. As the current Skyrail project has been constructed without providing for the extra capacity and faster services needed by Gippsland and the growing suburbs south and east of Dandenong”. So we could race through to Pakenham and then still get stuck behind the metropolitan rail traffic. It doesn’t take a scientist the calibre of Dr Wild to understand that this could be a substantial issue for many years to come.

Gippsland Rail Needs also highlights the benefits of additional inter-town public transport connectivity between Gippsland towns, for work and education opportunities, and potential gains in tourist income, especially from international visitors to be had via improved links with several key Gippsland tourist destinations, including Walhalla, the Baw Baws, the Buchan Caves, the Tarra Valley, Port Albert, the coastal route from Melbourne to Sydney via Gippsland, and the Great Alpine Road.

A high speed rail link between Melbourne and Sydney, incorporating Gippsland, would not only likely lead to ‘jobs and growth’, and better livability, but Laird (2011) states that it could reduce Australia’s aviation fuel use by 450m litres and the implementation of high speed rail could decrease the amount of carbon emissions produced per passenger on a Melbourne to Sydney flight from 89kg to about 12kg via rail, depending on the train route developed.

Stages 2 and 3 of the Gippsland Rail development is where Gippslandians can begin to see more considerable improvements to our rail commuting experience into Melbourne, but each step will cost an estimated $4b, due to the city’s current layout and access. As Latrobe City Councillor Graeme Middlemiss clarified to Gippslandia during a recent conversation, “these are huge bites of the State Government budget. We will have to keep up very steady pressure on both the Governments to achieve this”. Yet, as most Gippslandians know, these changes would make our patch of the world an even better place to call home and get our region’s economy running at full steam.

In late June, 2017, after Gippslandia #3 went to print, the State and Federal Governments agreed to a funding package that can deliver Stage 1 of the works proposed in Gippsland Rail Needs, which you can also read here.