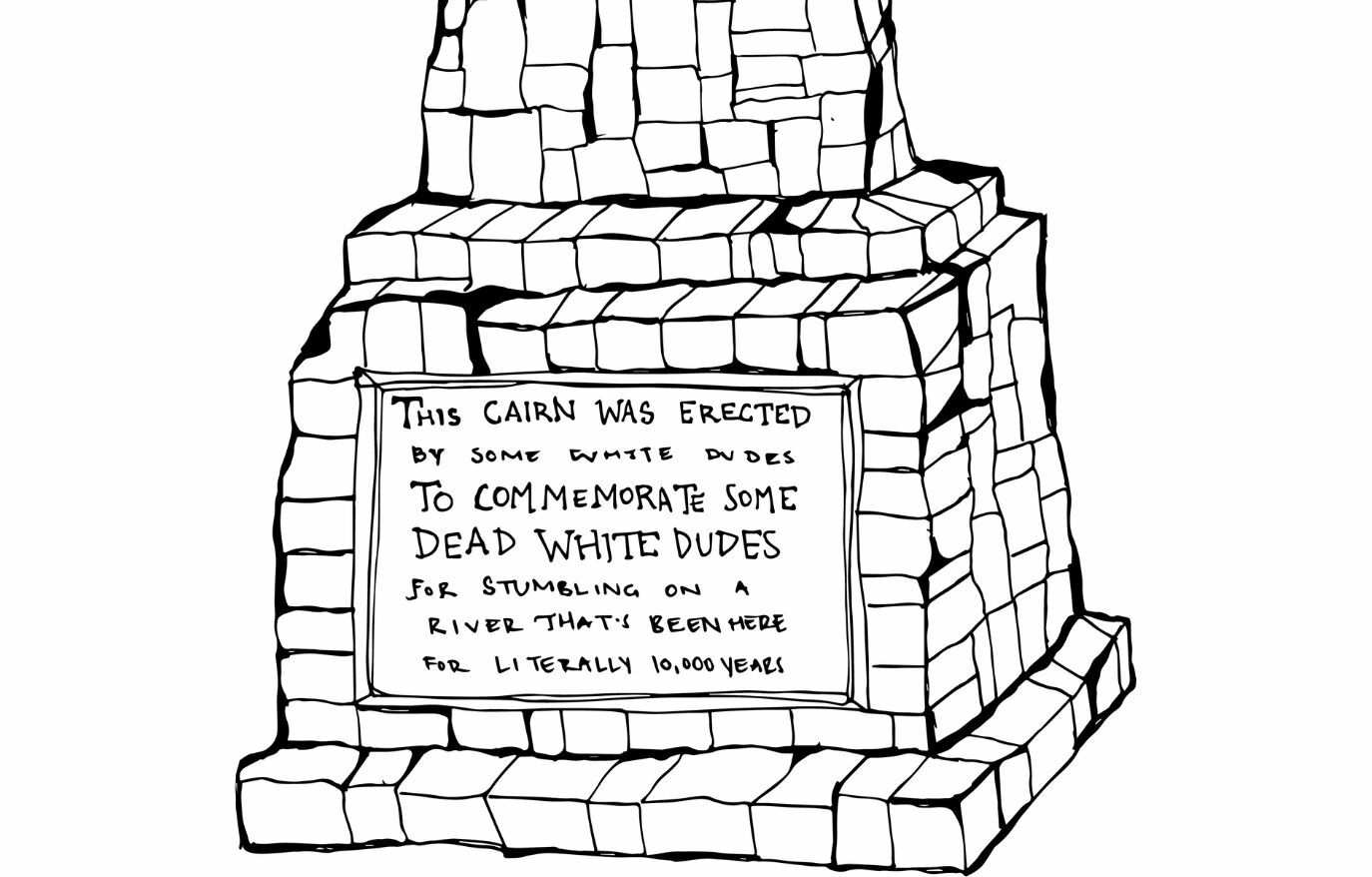 At the risk of flogging a certain horse to death.

Although a determined and canny explorer, McMillan’s role in massacres of First Nations people points to him not being at all a ‘best-fellow’ to anyone.

Imagine a pile of rocks, from which pours a most evocative Indigenous lament and some storytelling, triggered by the speaking of a word… that word selected by Indigenous Elders.

Imagine a cairn evolving into a tree of life…

Flipping through some aged and very thumbed pages, my attention is caught by two photographs of a horse’s hoof. One from above (the horse’s perspective) and the other from below (the road’s perspective). Curious. Just a hoof. No horse.

The paper was published in 1902. So, back in 1902, someone took photos of a horse’s hoof. It must have seemed very important at the time.

Imagine a man so revered that an acclaimed historian collects and keeps the hoof of the man’s horse.

“Point 7. Finally, we notice under this case the hoof of a horse, and a brass compass. The horse, in January 1840, carried Angus McMillan from the Maneroo High Plains (now Monaro), in the south-east of New South Wales through what is now called Gippsland to the sea at Port Albert; and the compass was worn on the sleeve of his bridle-arm during that note-worthy exploration, and lives in the blackfellows’ history of those far off days as ‘best-fellow tinder-box”.

The excerpt can be found in the Education Department, Victoria School Paper, Melbourne, for classes V and VI, No 40, April 1902.

The article itself (p.43) is titled “Some Interesting Historical Relics”. The first paragraph tells us these interesting relics are to be found among the collection of Mr John J Shillinglaw, “many years ago harbour-master at Williamstown” … “who may be regarded as our highest authority on the history and exploration of Australia.” “Mr Shillinglaw has kindly supplied the following information for the benefit of the young readers of The School Paper.”

Thus, Angus McMillan was introduced to the entire population of Grade 5 and Grade 6 Victorian school children in 1902.

It is one thing to revere the horse that carried the man, a kind of slavish adulation akin to owning Napoleon’s boot-buckle. It is another matter entirely to claim McMillan as the ‘black fellows’ best-fellow’. It is so false it swerves sharply into the realm of propaganda.

Given these Victorian School Papers were among the rare reading material available to students in those days, and were eagerly awaited, read and re-read, the impact of this deliberate hero-making, this reality distortion was undeniably part of the ‘silence’ that surrounded, for a hundred and fifty years, early settlement treatment of Gippsland’s First Nations people.

The monthly Papers also became the basic texts used by teachers for dictation, grammar and spelling lessons, and general knowledge quizzes. The influence of this government-approved material was, therefore, multiplied many times over, and its veracity seemingly never doubted.

Public art and statues help us get a handle on a place and its people. In Australia, public spaces have been changing with new technologies, adding to the scope and effectiveness of artists’ tools. The subjects for public celebration, and the many ways in which people and deeds are remembered, are more carefully considered. Dusty outback towns are catching on. Once the realm of a solitary ANZAC hero, public art installations now invite visitors to dip into local stories and culture.

Remaining in the Australian countryside, however, are the old cairns and memorials to pioneers: “Hume and Hovell passed this way…”

Cheerless concrete and local stone, most of them, with some sort of metal plaque. Welcome, stretch-the-legs-have-a-bit-of-a-read wayside breaks on long journeys: “That bloke Strzelecki came through here in 1841. Any chance of some lemon slice, love?” Younger, google-facts-at-fingertips travellers churn out extra information, “It says the Aboriginal guides kept him alive by killing koalas to eat. Ewwww!”

Currently in Gippsland, twenty ugly cairns commemorating the journey of Angus McMillan, erected around 1926–7, are under severe public and local government scrutiny. Having finally succeeded in renaming the Electorate from McMillan to Monash, the call is for the cairns to be removed. 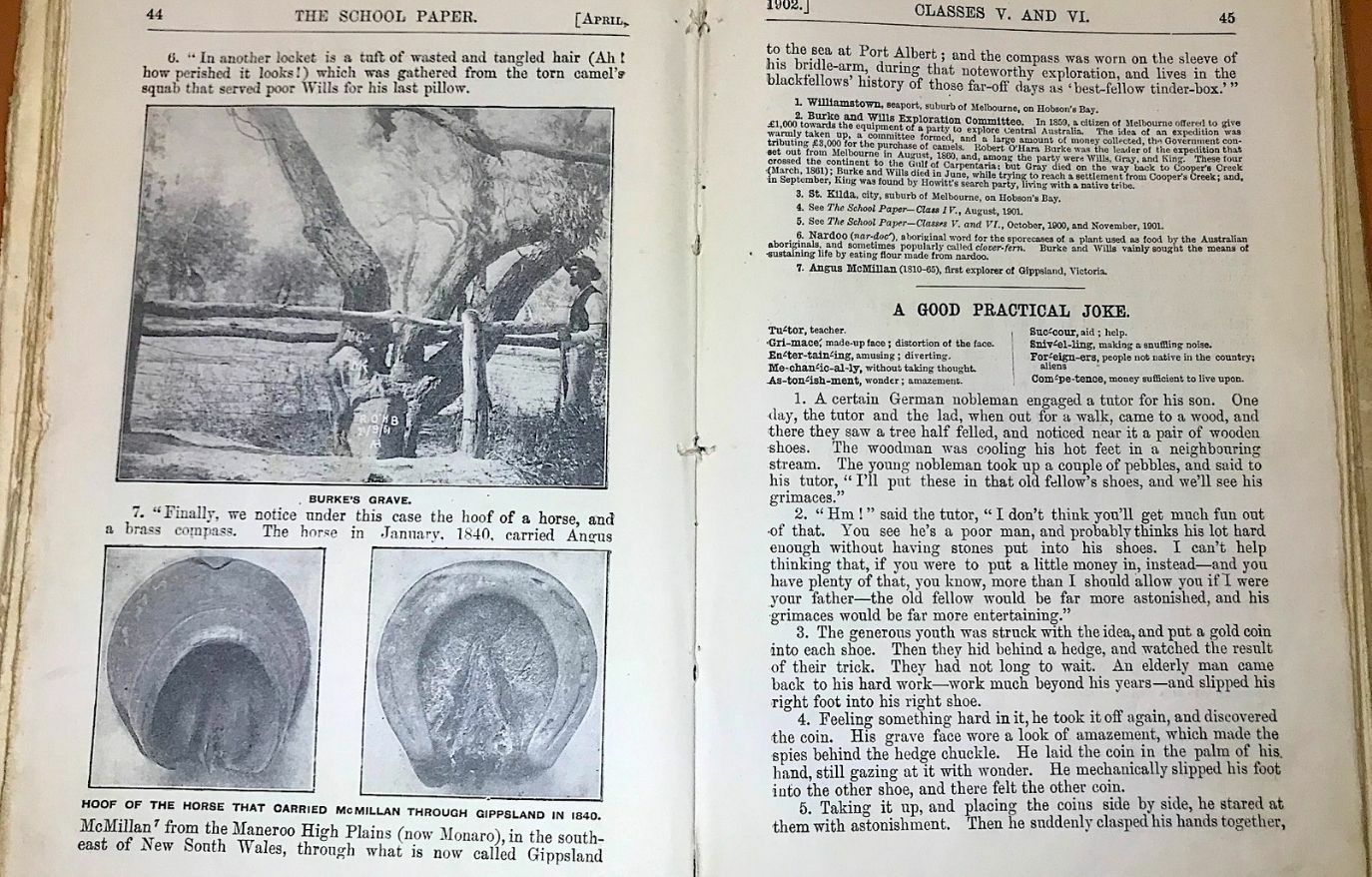 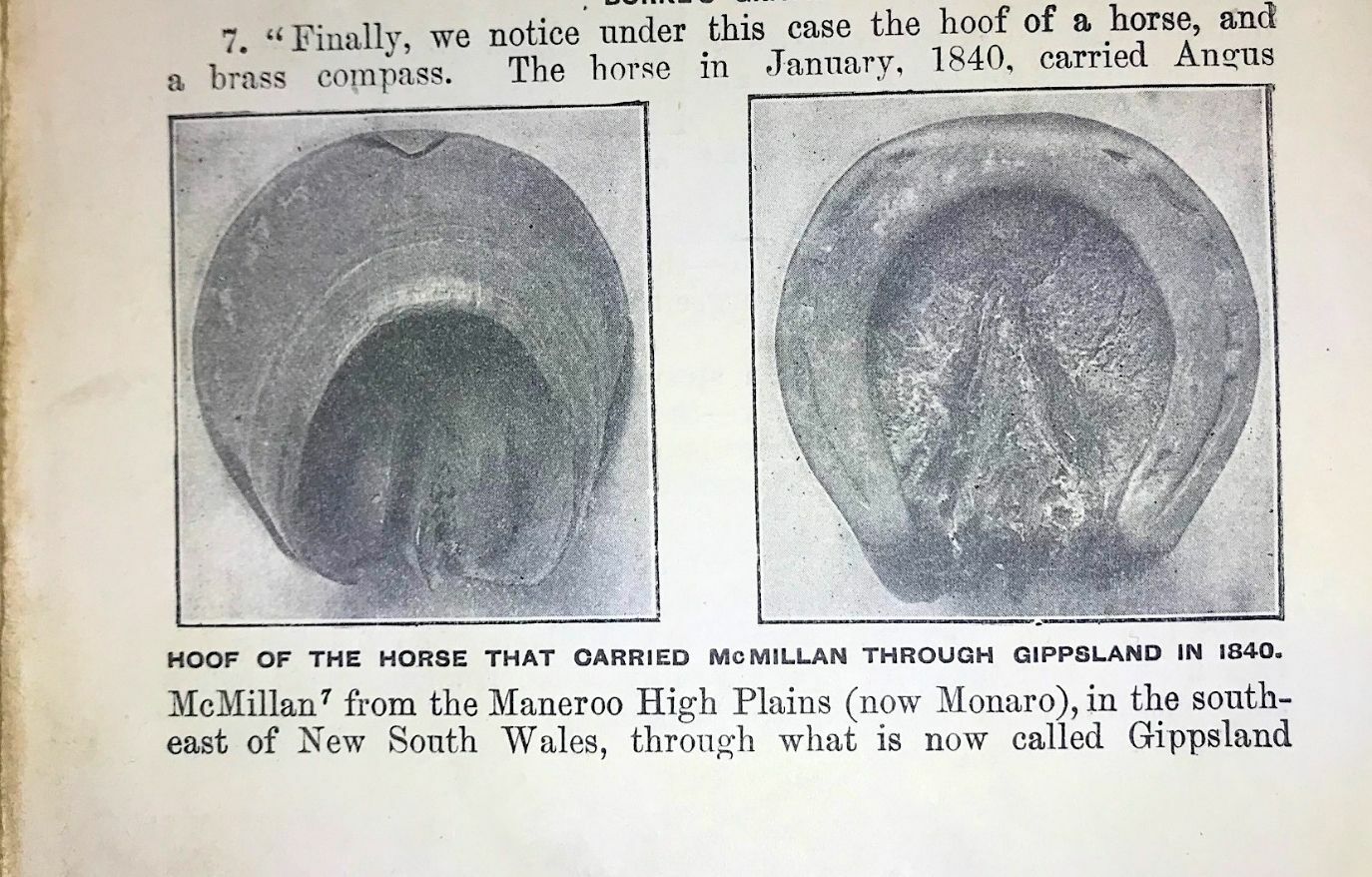 Although a determined and canny explorer, McMillan’s role in massacres of First Nations people points to him not being at all a ‘best-fellow’ to anyone, other than those who surrendered, ‘came into the back paddock’ and fearfully existed as servants, drovers and farm labourers.

British colonial custom of the time — throughout the world — was to take the land, claim it for Queen and Empire, clear it of vegetation and troublesome Indigenous tribes, and sell it to white settlers for their European farming practices.

In the past fifty years, some very fine authors and historians, trawling through original documents and spoken history, have exposed McMillan as ambitious, self-serving and, often, acting outside the law. Since the Myall Creek hangings in 1838, settlers had been aware of the repercussions of killing local Aboriginal people — if they were caught.

Once the ‘natives’ were tamed, McMillan’s Bushy Park homestead became a gathering place of displaced survivors with the big man doling out food and blankets in his role as Protector of Aborigines. Don Watson in Caledonia Australis points out “the irony of the man who led the rout of their civilisation posing as their benefactor.”

With a few exceptions, the genocide of Indigenous people was implicitly approved and widely accepted. Profound silences masked the truth of the ruthless dispossession and disposal of inconvenient ‘natives’. The silence continued, settling around pitiless social practices and the institutionalised stealth of laws which denied First Nations peoples’ rights and status into this millennium.

In 2013 Cal Flynn’s questioning unsettled me, triggered my defensiveness: ‘It’s not my fault.’

Cal, a Scottish journalist, great-great-great niece of Angus McMillan, was in Gippsland to explore and track her ‘dark family secret’. She had come across my name on the Internet as the author of a play about McMillan at Old Gippstown Heritage Park. Our family hosted, and then travelled with Cal along the McMillan and Indigenous history Trails.

We travelled from Maffra, from Briagolong to Sale then from Benambra through to Port Albert, back to Bairnsdale to Krowathunkooloong on to Ramahyuck the former Mission, the Bataluk Trail, and Yarram area to Warrigal Creek, and Jack Smith Beach, where other deplorable early settlement events occurred.

Getting to know Cal and showing her around was delightful, but aspects of the trip were gruelling. Each time we stopped at one of the McMillan cairns, the words on the plaques erased the real story. “Why are they still here?” queried Cal in her delightful Scots brogue. “Do people not know what my relative was up to?”

The plaques reveal another attitude, apparent also in the School Paper article, that early settlement was heroic and benevolent. This dishonest legacy sat heavily within me. I was also, in the company of a guest, facing up to the widespread ignorance that left such a trail of praise for McMillan still in place.

Cal Flynn returned to Scotland and wrote and published her book, Thicker Than Water. In part, it expressed surprise for our nation’s blinkers regarding that era of early settlement.

“We need places that prompt us to reflect.”

With hindsight, that trip, the following of the McMillan trail through Gippsland, became a time for me to reflect on how I felt personally: the challenge of feeling guilt and shame for events before my time, what it means today, what to do about it.

We need places that prompt us to reflect.

I’ve never thought of Australia as a place where complete misinformation, even lies, were taught as truth, and like many Australians, I ridicule US President Donald Trump for his alternative facts. However, a simple School Paper article, all seven lines, demonstrates how untruths become fact; the social context, the just “the way it was in those days”. ‘Everyone knows…’ becomes the basis for decision making and prejudiced beliefs for generations.

The historical landscape is bleak at times.

So too the knowledge landscape. For all our educational industry of universities, schools, teachers and students, it has taken the bravery of a few individuals to break through the lies and silence. These independent, questioning, attentive historians, Indigenous activists and humanitarians are the disrupters who shake the tree, reject the seductive status quo, and guide us to a more honest history of Australia. 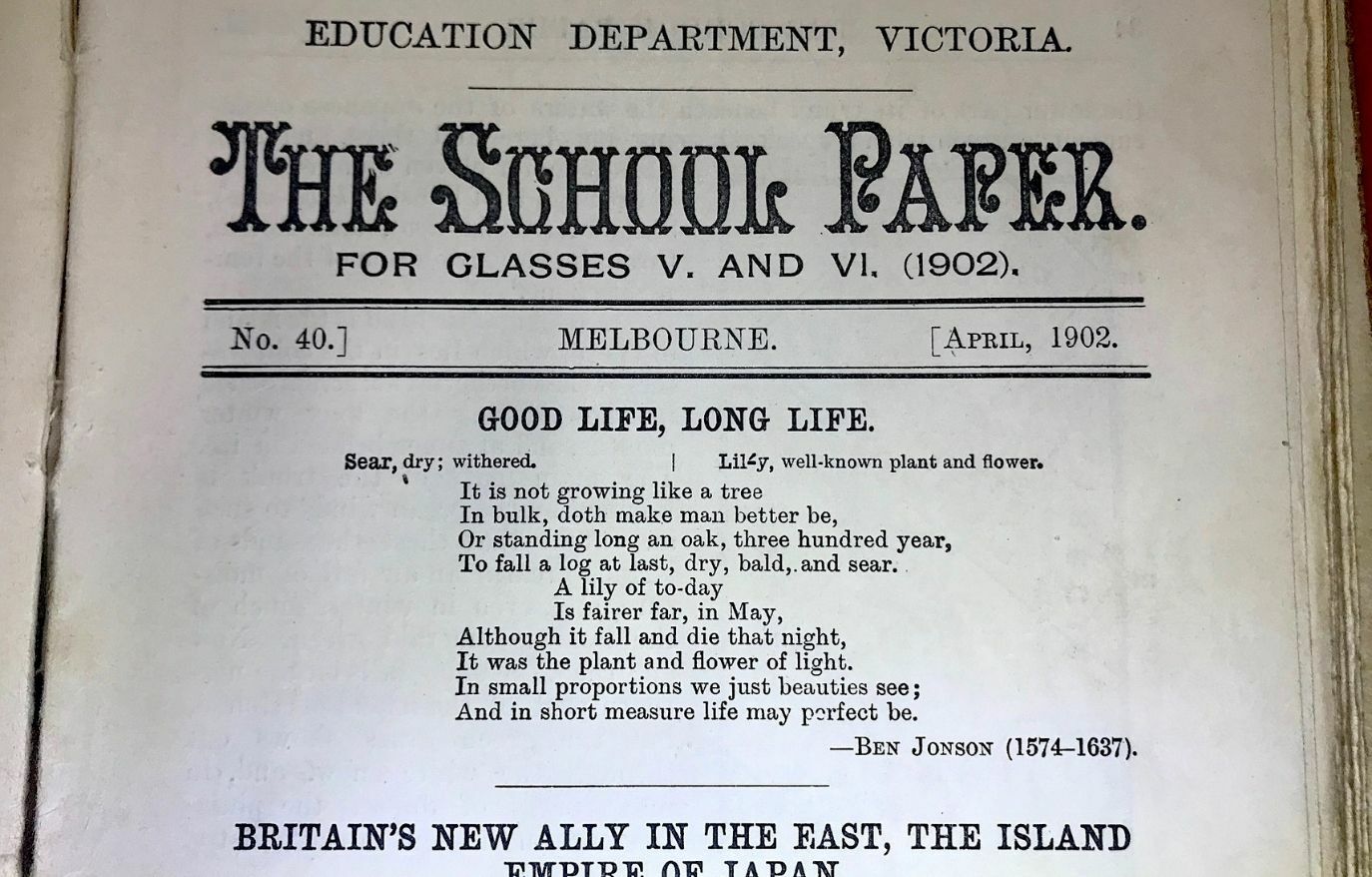 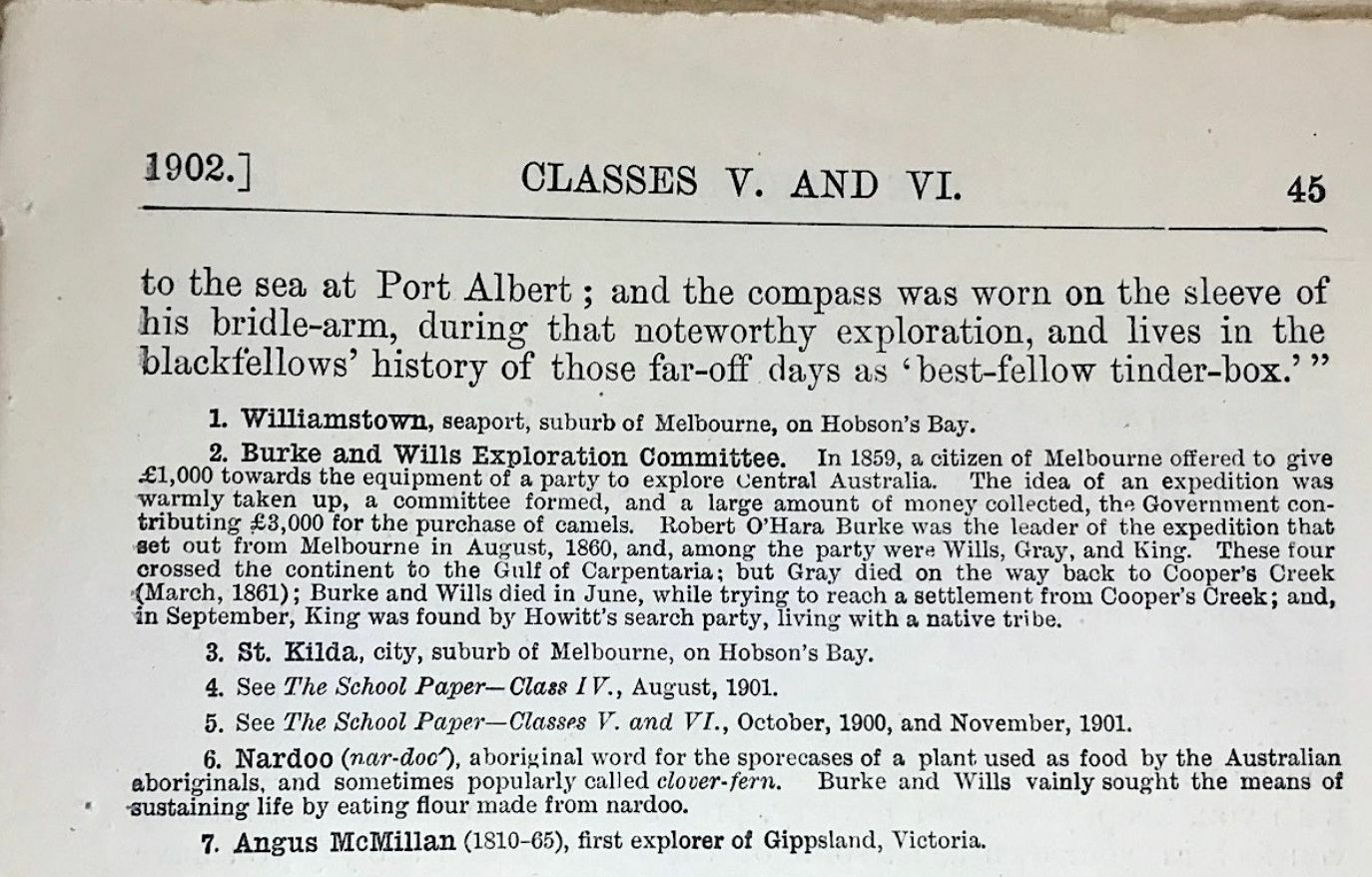 The Black Lives Matter protests, complete with riots and statue tossing, have thrown sharp light onto our treatment of Aboriginal people since that first colonial step ashore. We arrive back at the push to get rid of twenty public cairns.

What do visitors think when they stop at these memorials? Obviously, similar to the Victorian School Papers example, unless they grab their phones for further information, they think McMillan must have been a pretty special sort of a bloke.

In June 2020, Wellington Shire voted five councillors to four in favour of retaining the McMillan cairns. More than half of the 240 submissions lodged to Council were in favour of removing two of the cairns located on public land at Sale and Stratford.

While local governments lag behind, there is a widespread realisation that 20 statues honouring a man involved in the massacres of unarmed people is unpleasant, lacking in any sort of empathy for Indigenous descendants.

Gunai and Kurnai clearly wish for them to be removed. Many sympathise with their emotions about this man, and more profoundly around the events and culture that he has come to represent. McMillan was a murderer, but not the only one. The killings of innocents was widely condoned and society turned its back; the pain of those actions resounds to this day.

Although the act of removal would feel gratifying, a cathartic ridding of the ‘boogie-man’, my personal belief is that such a remedy inadvertently reinforces the great Gippsland silence.

In Hollywood, there has been a rush of withdrawals of film and TV show episodes, with humble apologies: writers, producers and ‘stars’ alike facing up to their racist characters, stereotypes and the normalised, racial marginalisation contained within their industry.

Does this withdrawal of mainstream material, this editing, leave their legacy clean?

Can we just edit history? Some countries have tried for sure, and we hold them in disdain for it.

The cairns marking McMillan’s progress on his journey into Gippsland give us 20 opportunities to re-see the big picture of white settlement. Everyone acknowledges the need for, at the very least, new interpretive, truthful signage of events at each of the sites.

A better option, in my opinion, would be to use these cairns to create something new, enable artistic and symbolic reinterpretation of early settlement. De-construct. Re-construct.

Imagine a series of metal mirrors that reflect sunlight onto different storyboards and Indigenous faces, at the cairn, and back at ourselves at different times of the day…

How breathtaking would it be to harness the wonderful diversity of Gippsland artists, historians and engineers from a cross-section of genders, races and backgrounds?

Like others, I believe Black Lives Matter. That truthful acknowledgement of our dark colonial history matters, that making changes to policies, attitudes and practices matters, that commemorating others besides white men matters, that there are gifted leaders and artists in our communities ready to build from the past with a vision for the future. It all matters.

How breathtaking would it be to offer visitors 20 enlightened, artistic, informative, honest places to get a handle on Gippsland!

Now, can we talk about those cairns? Again!