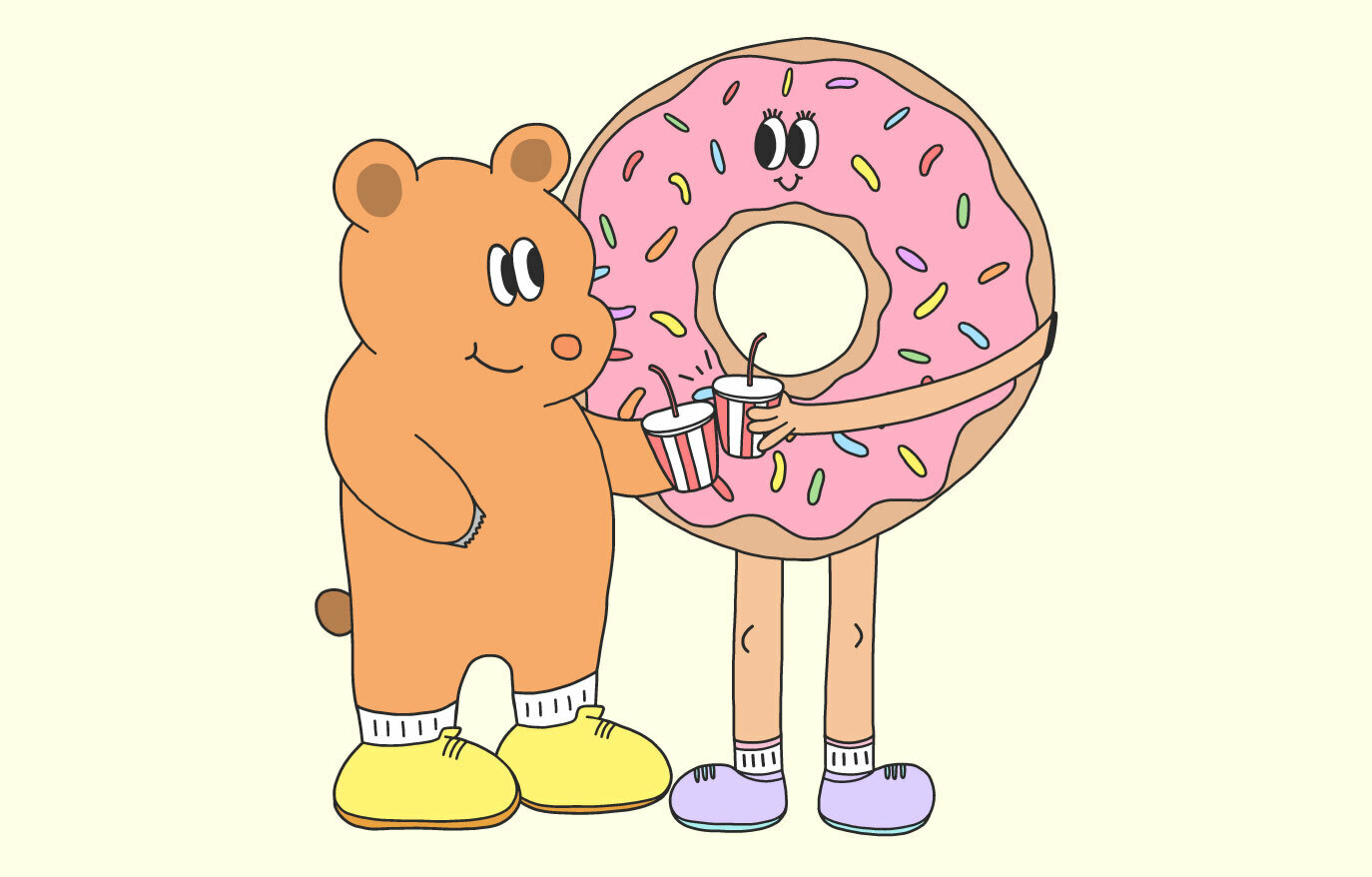 From managing concrete plants, to commercial fishing, to running a very successful donut truck. This is Ewan’s story...

You’re starting a business that specialises in selling delightful donuts to hungry punters. How long before you open do you cook your very first donut?

For the founder of Big Bear’s Donuts, Ewan Fotheringham, all he needed was three days!

From managing concrete plants, to commercial fishing, to running a very successful donut truck, Ewan’s story is a tale that’s so wild, it must be true.

Ewan grew up in Bendigo. It was an opportunity to manage concrete plants for Pioneer Concrete, which has since become Hanson Australia, that led him to move to Lakes Entrance in 2002.

“I didn’t know much about East Gippsland and planned to be here for about 18 months, but when coming down the hill from Jemmys Point Lookout, I thought ‘Yep, that’ll do me’.”

The concrete plant shifted from a family-run affair to being a division of a corporate entity, and Ewan says that during the transition there was a lot of change. The middle management role was becoming much more of a challenge and less appealing for Ewan, so he began to ponder his next move.

“...coming down the hill from Jemmys Point Lookout, I thought 'Yep, that'll do me'.”

He’d always loved the water and sailing, plus he was based in Lakes, so Ewan then dived into the commercial fishing game.

An average workday on the boat would see him leave the house at nine or 10 at night, get all the gear ready to head out at the crack of dawn and fish all day for maybe two to four days each time.

If you catch fish, it’s great, but there have been a few tough years for the industry. Originally, Ewan wanted to stick with it and keep fishing. He also knew the salary he could make in a new middle management position, but that would require some travel to Melbourne, something he wasn’t ready to do. So, after 12 years and his next role uncertain, Ewan jumped out of the tub and into something very different.

Ewan’s Dad migrated to Australia, and as he found his footing in his new country, he’d go and mow everyone’s lawn, almost as a community service. It’s obvious that Ewan has his father’s work ethic, but his Dad also provided a memory that would seed the next big idea.

“There was a jam donut van in Bendigo that Dad would take us to on Sundays, and it’s been there for about 40 years.”

An integral aspect of operating a donut van is knowing how to make a donut, and it was knowledge that Ewan didn’t yet possess. But, after a lot of Googling and time spent on YouTube, Ewan made his first donut just three days before he opened.

As he says now, “In hindsight, some of what we made at the beginning was pretty ordinary.”

Big Bears Donuts opened in November 2019. The business name is what Ewan was called by his wife’s children from a previous marriage. The two kids needed to call Ewan something, other than Dad, and due to his size and Bundy Rum drinking habit, Ewan became ‘Big Bear’.

The logo reflects Ewan as the Big Bear with the kids represented by the little bear.

Shortly after their launch, the bushfires roared through and wiped out tourism in East Gippsland. The situation was seemingly bleak for Big Bears; the brand hadn’t yet gained much traction and many locals had left the area.

Australia Day 2020, Ewan had a good day of trade and it was the first time the business showed him the potential of what it could become.

By March, they were really looking forward to the Easter holidays and the chance to have another big week of sales… and then COVID-19 struck.

From the outset, Ewan says that he didn’t receive a lot of positive feedback on his idea from friends or family.

“Toasted sandwiches were an option, and when we first started we did toasties, but we had to pull that back to just donuts due to time and space constraints in the van.

“A lot of people couldn’t see it succeeding and, in fairness, I couldn’t foresee what we’ve got now. I planned to do everything myself, [but] we’ve created a monster!”

With Covid restrictions wreaking havoc on their business, Ewan tried doing home deliveries; he set the van up in the driveway at home, then cooked and delivered donuts from there.

They weren’t making a lot of money, but it kept the wolves at bay, it was a pleasant distraction for people in Bruthen, Sarsfield, Metung, Tambo, Marlo, Orbost, etc., and it began to build a great clientele.

“I’d drop donuts off and kids would leave notes and chalk drawings in their driveways saying thanks. There would be kids squealing with delight.

“[Sometimes I] Didn’t know who was more excited: the parents, the kids or the f@cken dogs!”

“I planned to do everything myself, [but] we've created a monster!”

The next key public holiday for the business was the Labor Day long weekend, and whenever Big Bears Donuts opened, they had big lines. People queued in the rain, wind and hail. Ewan found it humbling.

“On our opening day, we had $50 in the account. There wasn’t even money to print business cards. We were either going to go broke and lose our home, or bust our arse and make something of it.

“We built the trailer ourselves, and I did as much of the fit-out work as I could. We scrounged for all the equipment and most of it is secondhand. But, we had incredible support from some of the trades, who saw what we were doing and didn’t send us the bills until we were established. They helped us get a start.”

Slowly, but surely, Big Bears Donuts have been able to change over to new equipment. They worked themselves into the position of being able to expand and open a storefront, which they did on Good Friday this year.

“[The shop] took us back to square one. Everything made from the van was reinvested into the shop. Basically, I doubled down, like a f@ckhead.”

Ewan says the shop is a bit of a different beast – much more work – but they thought they’d be in a good position for more summer trade.

“Even if we’re not in lockdown, the restricted travel greatly impacts our local economy here in Lakes Entrance. Tourism is decimated again. Bigger facilities (like gaming venues) are big employers, so it impacts employment more in East Gippsland than in other places. It even hurts the fishing industry, as you can catch them, but there aren’t many places to sell the fish to.”

Throughout the recent restrictions, the locals have kept supporting.

Ewan says it's imperative that they reciprocate the community support where they can too.

They’ve gone to places like Briagolong, where $5 from every box of donuts sold went to the tennis club. $1140 was raised for the tennis club in a time of real struggle.

Big Bears Donuts now employs 11 local staff members and has been hunting for even more people to join their team, especially as it will allow Ewan more time to focus on business development rather than making more tasty treats.

The most popular donut is the original glazed and jam variety, with their Peppermint Crisp edition being their fastest-selling donut. And, the most unique donuts created so far have been a unicorn donut, a wagon wheel donut and a vanilla slice donut.

Michael Duncan, in his role as a Strengthening Business Facilitator working for the Australian Industry Group on the Australian Government’s Entrepreneurs’ Programme, had this to say about this sweet business success, “Ewan has been a shining light in East Gippsland and his business story is an inspiring one. He’s put everything, his money, his time and energy into making Big Bear’s Donuts work. He’s continuously set goals, achieved them and then set higher ones.”

In reflecting on the Big Bears adventure so far, Ewan offers the following advice, “Think outside the box. Back yourself; don’t surround yourself with what you can’t do, but focus on what you can.”