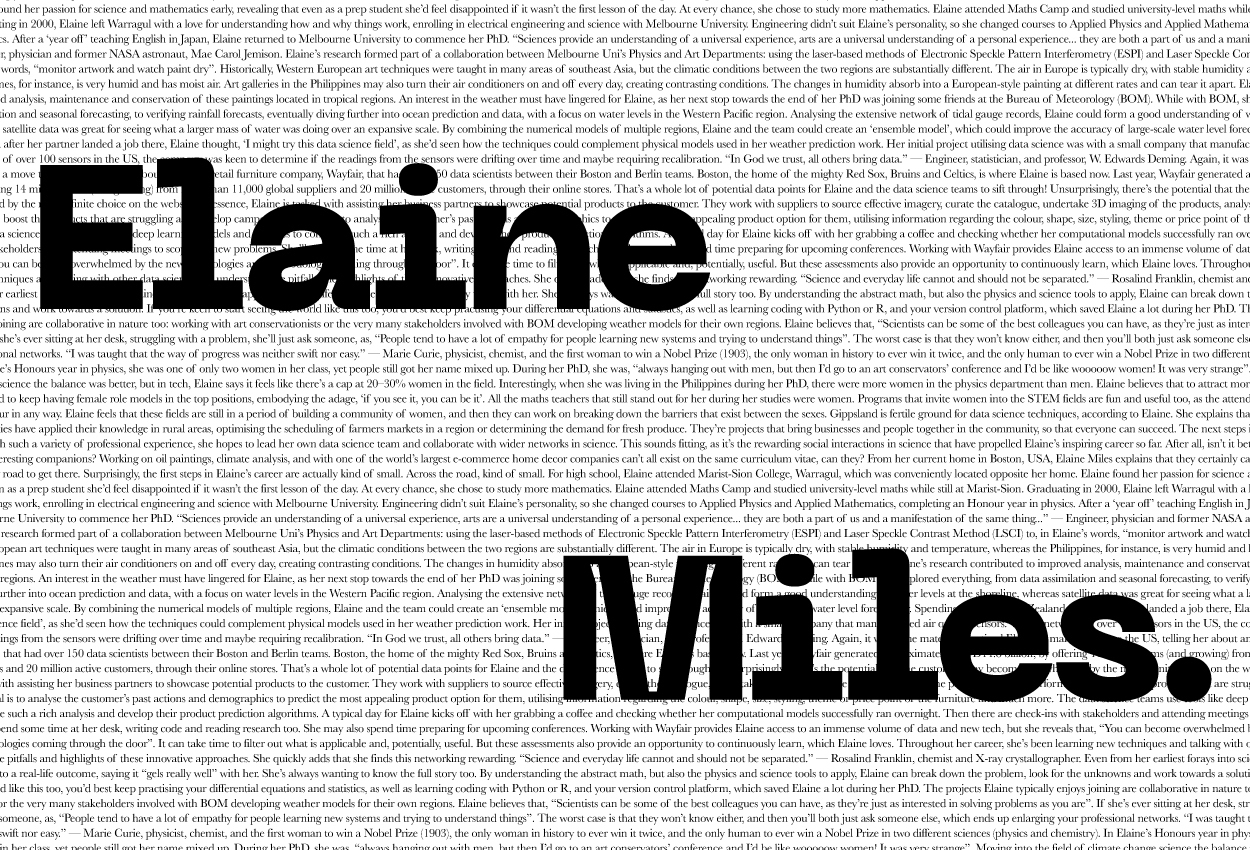 Working on oil paintings, climate analysis, and with one of the world’s largest e-commerce home decor companies can’t all exist on the same curriculum vitae, can they? From her current home in Boston, USA, Elaine Miles explains that they certainly can, you just have to enjoy the winding road to get there.

Surprisingly, the first steps in Elaine’s career are actually kind of small. Across the road, kind of small. For high school, Elaine attended Marist-Sion College, Warragul, which was conveniently located opposite her home.

Elaine found her passion for science and mathematics early, revealing that even as a prep student she’d feel disappointed if it wasn’t the first lesson of the day. At every chance, she chose to study more mathematics. Elaine attended Maths Camp and studied university-level maths while still at Marist-Sion.

Graduating in 2000, Elaine left Warragul with a love for understanding how and why things work, enrolling in electrical engineering and science with Melbourne University. Engineering didn’t suit Elaine’s personality, so she changed courses to Applied Physics and Applied Mathematics, completing an Honour year in physics.

After a ‘year off’ teaching English in Japan, Elaine returned to Melbourne University to commence her PhD.

Historically, Western European art techniques were taught in many areas of southeast Asia, but the climatic conditions between the two regions are substantially different. The air in Europe is typically dry, with stable humidity and temperature, whereas the Philippines, for instance, is very humid and has moist air. Art galleries in the Philippines may also turn their air conditioners on and off every day, creating contrasting conditions. The changes in humidity absorb into a European-style painting at different rates and can tear it apart. Elaine’s research contributed to improved analysis, maintenance and conservation of these paintings located in tropical regions.

An interest in the weather must have lingered for Elaine, as her next stop towards the end of her PhD was joining some friends at the Bureau of Meteorology (BOM). While with BOM, she explored everything, from data assimilation and seasonal forecasting, to verifying rainfall forecasts, eventually diving further into ocean prediction and data, with a focus on water levels in the Western Pacific region.

Analysing the extensive network of tidal gauge records, Elaine could form a good understanding of water levels at the shoreline, whereas satellite data was great for seeing what a larger mass of water was doing over an expansive scale. By combining the numerical models of multiple regions, Elaine and the team could create an ‘ensemble model’, which could improve the accuracy of large-scale water level forecasting.

Spending a year in New Zealand after her partner landed a job there, Elaine thought, ‘I might try this data science field’, as she’d seen how the techniques could complement physical models used in her weather prediction work. Her initial project utilising data science was with a small company that manufactured air quality sensors. With a network of over 100 sensors in the US, the company was keen to determine if the readings from the sensors were drifting over time and maybe requiring recalibration.

“In God we trust, all others bring data.” — Engineer, statistician, and professor, W. Edwards Deming.

Again, it was some mates that enticed Elaine to make a move to the US, telling her about an online retail furniture company, Wayfair, that had over 150 data scientists between their Boston and Berlin teams.

Boston, the home of the mighty Red Sox, Bruins and Celtics, is where Elaine is based now.

Last year, Wayfair generated approximately $AUD14.8 billion, by offering 14 million items (and growing) from more than 11,000 global suppliers and 20 million active customers, through their online stores. That’s a whole lot of potential data points for Elaine and the data science teams to sift through!

The goal is to analyse the customer’s past actions and demographics to predict the most appealing product option for them, utilising information regarding the colour, shape, size, styling, theme or price point of the furniture and much more. The data science teams use tools like deep learning models and statistics to complete such a rich analysis and develop their product prediction algorithms.

A typical day for Elaine kicks off with her grabbing a coffee and checking whether her computational models successfully ran overnight. Then there are check-ins with stakeholders and attending meetings to scope out new problems. She’ll spend some time at her desk, writing code and reading research too. She may also spend time preparing for upcoming conferences.

Working with Wayfair provides Elaine access to an immense volume of data and new tech, but she reveals that, “You can become overwhelmed by the new technologies and methodologies coming through the door”. It can take time to filter out what is applicable and, potentially, useful. But these assessments also provide an opportunity to continuously learn, which Elaine loves. Throughout her career, she’s been learning new techniques and talking with other data scientists to understand the pitfalls and highlights of these innovative approaches.

She quickly adds that she finds this networking rewarding.

“Science and everyday life cannot and should not be separated.” — Rosalind Franklin, chemist and X-ray crystallographer.

Even from her earliest forays into science, Elaine has liked seeing it applied to a real-life outcome, saying it “gels really well” with her. She’s always wanting to know the full story too. By understanding the abstract math, but also the physics and science tools to apply, Elaine can break down the problem, look for the unknowns and work towards a solution.

If you’re keen to start seeing the world like this too, you’d best keep practising your differential equations and statistics, as well as learning coding with Python or R, and your version control platform, which saved Elaine a lot during her PhD.

The projects Elaine typically enjoys joining are collaborative in nature too: working with art conservationists or the very many stakeholders involved with BOM developing weather models for their own regions.

Elaine believes that, “Scientists can be some of the best colleagues you can have, as they’re just as interested in solving problems as you are”. If she’s ever sitting at her desk, struggling with a problem, she’ll just ask someone, as, “People tend to have a lot of empathy for people learning new systems and trying to understand things”. The worst case is that they won’t know either, and then you’ll both just ask someone else, which ends up enlarging your professional networks.

In Elaine’s Honours year in physics, she was one of only two women in her class, yet people still got her name mixed up. During her PhD, she was, “always hanging out with men, but then I’d go to an art conservators’ conference and I’d be like wooooow women! It was very strange”.

Moving into the field of climate change science the balance was better, but in tech, Elaine says it feels like there’s a cap at 20–30% women in the field. Interestingly, when she was living in the Philippines during her PhD, there were more women in the physics department than men.

Elaine believes that to attract more women into STEM careers, you need to keep having female role models in the top positions, embodying the adage, ‘if you see it, you can be it’. All the maths teachers that still stand out for her during her studies were women. Programs that invite women into the STEM fields are fun and useful too, as the attendees aren’t adjusting their behaviour in any way. Elaine feels that these fields are still in a period of building a community of women, and then they can work on breaking down the barriers that exist between the sexes.

Gippsland is fertile ground for data science techniques, according to Elaine. She explains that several friends from tech companies have applied their knowledge in rural areas, optimising the scheduling of farmers markets in a region or determining the demand for fresh produce. They’re projects that bring businesses and people together in the community, so that everyone can succeed.

The next steps in Elaine’s career sound exciting too. With such a variety of professional experience, she hopes to lead her own data science team and collaborate with wider networks in science. This sounds fitting, as it’s the rewarding social interactions in science that have propelled Elaine’s inspiring career so far. After all, isn’t it better to wander the winding road with interesting companions?