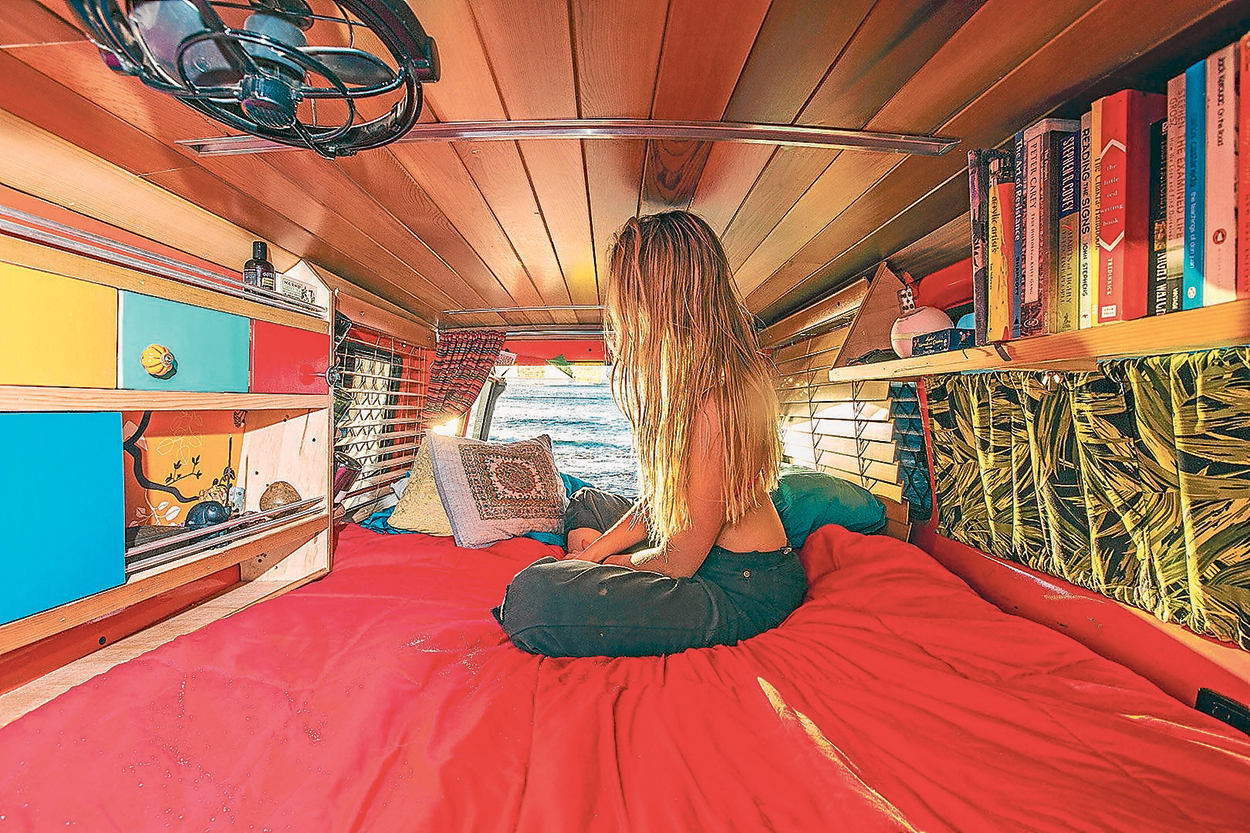 Dan & Louise talk of living on the road and their new plan of a tiny house on a truck.

We, humans, love to nest. We settle down and begin collecting. Believing that the bigger our living quarters and the more things we fill our homes with, the happier our lives will be. When in fact, we just have more cleaning to do and most of our possessions are safely stored away or collecting dust.

As a lover of trinkets, the idea of saying goodbye to my beautiful unnecessary collection of things was initially daunting and met with some resistance. It’s interesting how attached we become to our belongings given they are replaceable and inanimate – sparing no feelings for us. Do you ever look around at piles of clothes on the floor, an overflowing draw of cutlery or a shed full of rusty tools and think, ‘I don’t even use half of this stuff’, and against all reason, keep it anyway?

Instead of settling down and adding to our world of clutter, Dan and I decided to downsize our lives; becoming extreme minimalists overnight as we moved into our Toyota LandCruiser 75 Series Troop Carrier. We then spent two years travelling the countryside, calling wherever we parked for the night, ‘home’.

We are often asked, ‘What life is like on the road full-time?’ The best answer I can give is that it’s simple. You begin to live for the day rather than over-planning for the future. Personally, I find the lifestyle freeing. Life on the road isn’t for everyone. It comes with its uncertainties, which are all part of the adventure and learning. Our Australian overland trip altered our perspective on conventional living arrangements and opened our mind to the benefits of owning a mobile home. Eventually we grew tired of living within a three metre square space. The novelty wears off after a few months of hot, restless nights in northern Australia or the continual itch of midge bites from the previous night. Still keen on pursuing a minimal lifestyle, we had to work out a balance between practicality and comfort, while still having the added bonus of a transient home.

Grey nomads seem to be so comfortable in their lavish caravans, but after attending some camping expos we still weren’t convinced. We want to be able to cross the desert, drive on the beach and get ourselves out of shit creek. Why not custom build our own motorhome? Thus, the truck concept was born. It seemed that as quickly as you could say ‘truck’, we had sold the Troopy, Dan was booked in to get his truck licence and we were on a morning flight to Toowoomba to pick up our new rig, a dual cab 1990 Isuzu FTS 700. In her previous life this beast was a fire truck, but thanks to Gumtree she is now the foundation of our new home.

Time for the fun part - designing our tiny home. Custom building allows us full creative control, although building to strict specifications made spacial functionality imperative while drafting our ideas. The new living quarters includes a slide-out dining area, a loft bedroom and smart storage solutions. Sustainability was also a huge factor when thinking about our resources. We wanted to achieve a renewable energy system, rainwater collection and a composting toilet, all while maximising our use of recycled and up-cycled materials.

Aside from the engine in the truck, when completed our tiny home will be fully self-sufficient. It sounds like we are abandoning modern life, rather, we’re embracing our natural resources and plan to not only join the tiny home movement, but take it into the 21st century by creating a smart small house with all of the electrics being run through a Raspberry Pi (a basic compact computer board).

We are lucky that Dan is a carpenter and has the skills to bring our visions to life. Although, if you are thinking about undertaking a similar project, you don’t necessarily have to be a tradesperson or have previous experience in DIY. There is so much information at our fingertips and plenty of people willing to lend their expertise. Although our creations are tiny, they are keeping us very busy as we work towards our big dream. Like most dreams it hasn’t been without its trials; ‘Operation Truck’ is currently at a stand still due to Dan having recently broken his collarbone.

As soon as we are back in action, we will be documenting the trucks transformation as a videolog on our blog (thirdeyeguide.com), you can also follow our journey on Instagram with @thebarefootbeard and @thirdeyeguide. We hope our new obsession with tiny homes will inspire others to think about alternative living or even just go on a road trip to test the waters.

Louise and Dan have also recently released High Tech Nomads into the wild too. Check it out!

Tiny house fact #1
A tiny house is one that is less than 37 m2. Whereas, a small house is frequently classified as being between 37 m2 and 93 m2, and some people are testing the viability of living in homes as small as 8 m2.

Tiny house fact #2
For comparison, a 2013 survey found that Australia was building the biggest homes in the world – 241 m2. This represents a decline in Australian home sizes, which peaked in 2009 during the ‘McMansion’ period of house construction.

Tiny house fact #3
English-born, US-based, architect Sarah Susanka is widely credited with initiating the movement towards smaller houses when she published, The Not So Big House in 1997. Her building philosophies promote, “building better, not bigger”.

Tiny house fact #4
Proponents of small and tiny houses highlight the fact that smaller homes lower the cost of living by lessening the home’s heating, energy, maintenance and repair costs, as well as reduced rates and taxes.

Tiny house fact #5
Minimalist authors believe that you, ‘search for happiness not through things, but through life itself; thus, it’s up to you to determine what is necessary and what is superfluous in your life’. If this means, reducing the size and quantity of ‘things’, then so be it.

Tiny house fact #6
Last year, Boston artist Jeff Smith, created the “world’s smallest house” that he then rented on Airbnb for $US55 per night. The portable building was so small it fits into the back of a van. And the toilet? A steel desk drawer filled with kitty litter…