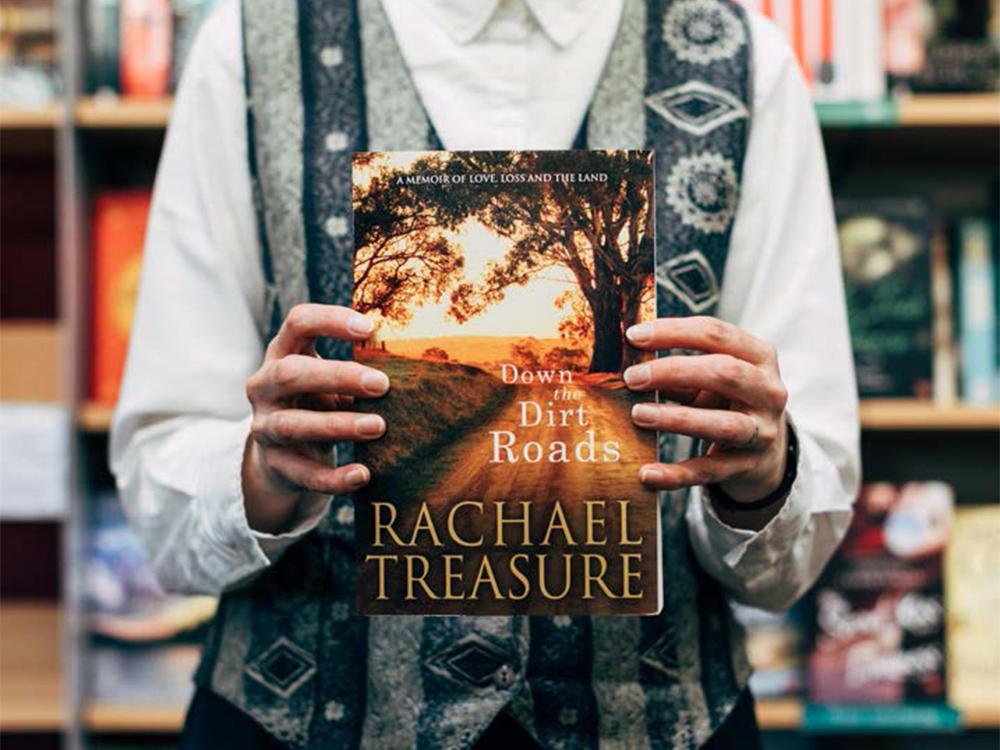 Down the dirt roads.

Rachael Treasure’s most recent work, Down the Dirt Roads, focuses on mostly on her journey in learning how to take care of herself, the land and her animals.

“As I fly back in time and hover over that clearing that I witnessed as a child, I know in my heart that if a woman had been in charge of converting that land into a farm, she would have gone about it vastly differently. The landscape’s beauty and diversity would’ve been retained, and all the creatures would’ve got to share in some way.

“When I found myself at the age of forty-one, without the paternal support I craved trying to escape a toxic marriage, I sought the refuge of a single room on my friend’s farm next door. Crammed into one bed with my kids, I realised the depth of my lack of self-worth. I was ill-equipped to reason with the blokes who had ousted me and negotiate a better way forward with them. In my world, women had been conditioned to put up and shut up. So I did. I gave in and walked away with nothing.”

When Rachael was asked to give a talk at her former secondary school, she asked the question: “Who is aiming for a career in agriculture?” Out of 150 girls, only 2 raised their hands. Rachael tried a second question: “Who here eats food?” As you can imagine 150 hands went straight up. And that’s just it. We all eat food, we all need food, but in our schools and our culture, farming is not held in high esteem. Very few people aspire to go into the production of life-giving food and take care of the land that produces it.

Back in 2002, Rachael Treasure, first combined her love for the land and writing in the novel, Jillaroo, sparking a publishing boom in contemporary Australian women’s fiction.

Rachael’s most recent work, Down the Dirt Roads, is a memoir, which mentions her years spent here in Gippsland as an ABC Journalist, but focuses mostly on her journey in learning how to take care of the land and her animals. Her groundbreaking journey in healing, health and hope shows us what is possible both in agriculture and human care.

Rachael’s “passion is to inspire us to regenerate our Australian soils, grasslands and food systems...” in a way that is more than just sustainable, it’s regenerative and from the heart.
—
Rachel’s book (Penguin Books, 2016) is available to buy through Reader’s Emporium, Traralgon, readersemporium.com.au.