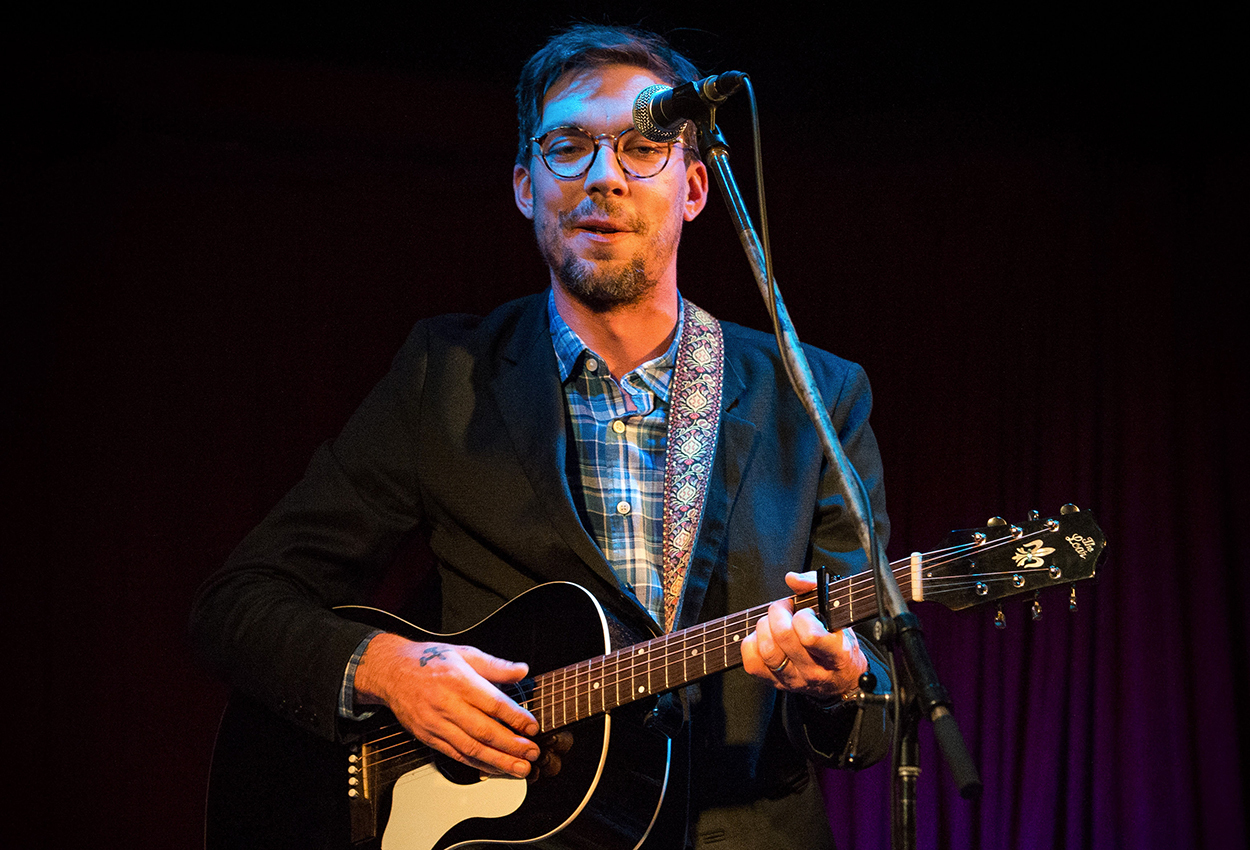 Call of the Lyrebird.

Thanks to the Lyrebird Arts Council, the Meeniyan Town Hall is a live music destination, hosting performers from the world over.

It seems that no matter how small a country town is, it’s guaranteed to be a hall. Heck, some Australian towns seem to only be a hall. Once host to surly town hall debates, B&S (Bachelor & Spinster) Balls, CWA (Country Women's Association) meetings, and unhinged 18th birthday parties, unfortunately, these days our halls are frequently gathering dust. An exception to this can be found in the South Gippsland town of Meeniyan. Thanks to the Lyrebird Arts Council, their town hall has become a live music destination, one that hosts performers from the world over who dig playing on its charming stage.

When I first contacted Ian Bevington, co-founder of South Gippsland’s Lyrebird Arts Council (LARC), he said, “I don’t have that much to say. I just book bands”.

But when I speak with him, I found it couldn’t have been further from the truth. Ian has plenty to say about music, children’s books, dying and everything in between. Yet he cringes when anyone puts the focus of the Lyrebird Arts Council on him, “It’s not just me. It’s a group of people. I just started it off”.

At its beginning in 1999, it was a family affair consisting of Ian’s partner, Suzanne, and daughters, Precious and Ruby, who were in primary school. Now, 19 years on, the family vibes still run strong, even though the kids have moved on. As Ian confirms, “People that volunteer at LARC become part of my family”.

For Ian, “music is the great leveller”. It brings people from all walks of life together onto the same footing. He’s all about equality within LARC and notes that nothing would happen without the team of about ten volunteers, who assist in everything from ticketing, setting up, completing the pack down and even cooking meals for the acts.

Ian tells me that the group has been responsible for bringing more than 660 live music shows to the region. And I’m not just talking about Cold Chisel cover bands here. The likes of Paul Kelly, Neil Finn, Tim Rogers, The Waifs, Dan Sultan and the late Sharon Jones have all enthralled audiences at the Meeniyan Town Hall.

It all began after Ian and Suzanne moved from Collingwood to South Gippsland in 1990.

“I’d seen some pretty horrible things in Melbourne at the time,” Ian says. “The punk scene was literally dying and I wanted to get away from that and live life. We had two young pups and I wanted them to experience something unique”.

While they loved their new country lifestyle of growing their own veggies and chopping wood, they quickly realised that the South Gippsland music scene—and the coffee—left much to be desired. Ian was ‘bored shitless’. “The pubs down here were doing karaoke… When I moved back you couldn’t even get coffee,” Ian says, recalling a time when milk was poured into some Nescafe for him and then called ‘coffee’. “Everything was still so conservative”.

Heavily influenced by music from a young age and a self-confessed vinyl junky, Ian says, “There were a few things on at the pubs, but it was kind of like a guy playing out of tune, singing a Johnny Cash song and it was just fucking terrible”.

The lack of live music in the area resulted in the family making the substantial journey back to Melbourne several times a week. Deciding to do something about it, the family tried organising a few decent gigs at the Tarwin pub.

Embarrassingly, less than a handful of people showed up both times, and the pub lost money. After heading back to the drawing board, they decided to position themselves under the banner of ‘regional arts’ and then formed the Lyrebird Arts Council, or ‘LARC’ as it is fondly, and fittingly, abbreviated to.

While they sometimes gain some support from Arts Victoria, they don’t receive any money from the South Gippsland Shire, nor do they make a profit. It’s quite simply all done for the love of live music.

In the beginning, Ian says, “I’d hit up people like Bill Cullen, Paul Kelly’s manager, and he’d be like, ‘No fucking way is Paul Kelly going to play at Meeniyan Hall’”.

These days, however, it’s swapped to be the other way around, with performers contacting Ian requesting to play at the venue.

The turning point, he says, was securing of the gigs of the year in 2004. US artist Gillian Welch came to Meeniyan and, unbeknownst to Ian, so did The Age, Triple R and Rolling Stone. From there the floodgates opened. The following year, Paul Kelly asked to play in Meeniyan too. “You couldn’t get him off the stage. He played for three hours and 40 minutes and everyone was up dancing”, recalls Ian.

After that, things just snowballed and haven’t stopped since. Listening to what some of the touring artists have said about their experience of playing at Meeniyan, it seems that they fall in love with the scenic beauty of South Gippsland as much as the enchanting venue itself. At their recent show, Neil and Liam Finn mentioned that they were enamoured with the area and were looking forward to heading down to our local treasure, Wilson’s Promontory. In 2015, Angus Stone said, “I hope I won’t disappoint tonight—I have had the most relaxing day enjoying South Gippsland”.

I ask Ian why such big-name acts want to come out to ‘Prom Country’ and play these small shows, “They come because they want the experience of being that close to an audience and because they know we care about music”.

It’s this kind of closeness that has the performers delighted. During his 2014 tour, John Butler commented while performing at Meeniyan that, “When I dreamed of this intimate solo tour, this, here, now, is what I dreamed”.

Ian further emphasises this intimacy, saying, “You could be at the back door of Meeniyan and still be closer than if you were at Rod Laver [Arena]”. Anyone that’s been lucky enough to experience the venue will agree. I saw the Finn’s father and son show earlier this year and they were that close I could’ve been in my lounge room—it also helped that I was able to bring in my own selection of wine and cheese (honestly, where else does that still happen?!).

Ian says they could easily sell alcohol, but they don’t want to be commercial and have no need to do so. Meeniyan’s old-fashioned unpretentious charm is what makes it so special, right down to the BYO nibbles and plastic bucket chairs.

“Really, what is development anyway?” Ian reflects, “It’s not always looking to the future. Sometimes you’ve got to look to the past and say, ‘That worked. Let’s bring that back in’”.

As Ian warms to sharing LARC's remarkable achievements, he speaks of a desire to share his knowledge and experience. Now in his sixties, a personal future goal is to draw younger locals, those in their twenties and thirties, to LARC. Ian would love nothing more than to take them under his wing and offer mentorship. Unfortunately, and not uncommonly, finding the young people is the difficult part, “That’s the holy grail, if you will, to find young people,” he says.

It’s Ian’s firm belief that “You’re only as good as your last show,” and he promises that next year, to celebrate LARC’s twentieth anniversary, Meeniyan will be hosting some of the most memorable shows yet. Looking over the list of remarkable artists that have performed at the Meeniyan Town Hall in years past, you can’t help but become excited for what may come.

—
For further information on the Lyrebird Arts Council and their upcoming events, please see their website, lyrebirdartscouncil.com.au.