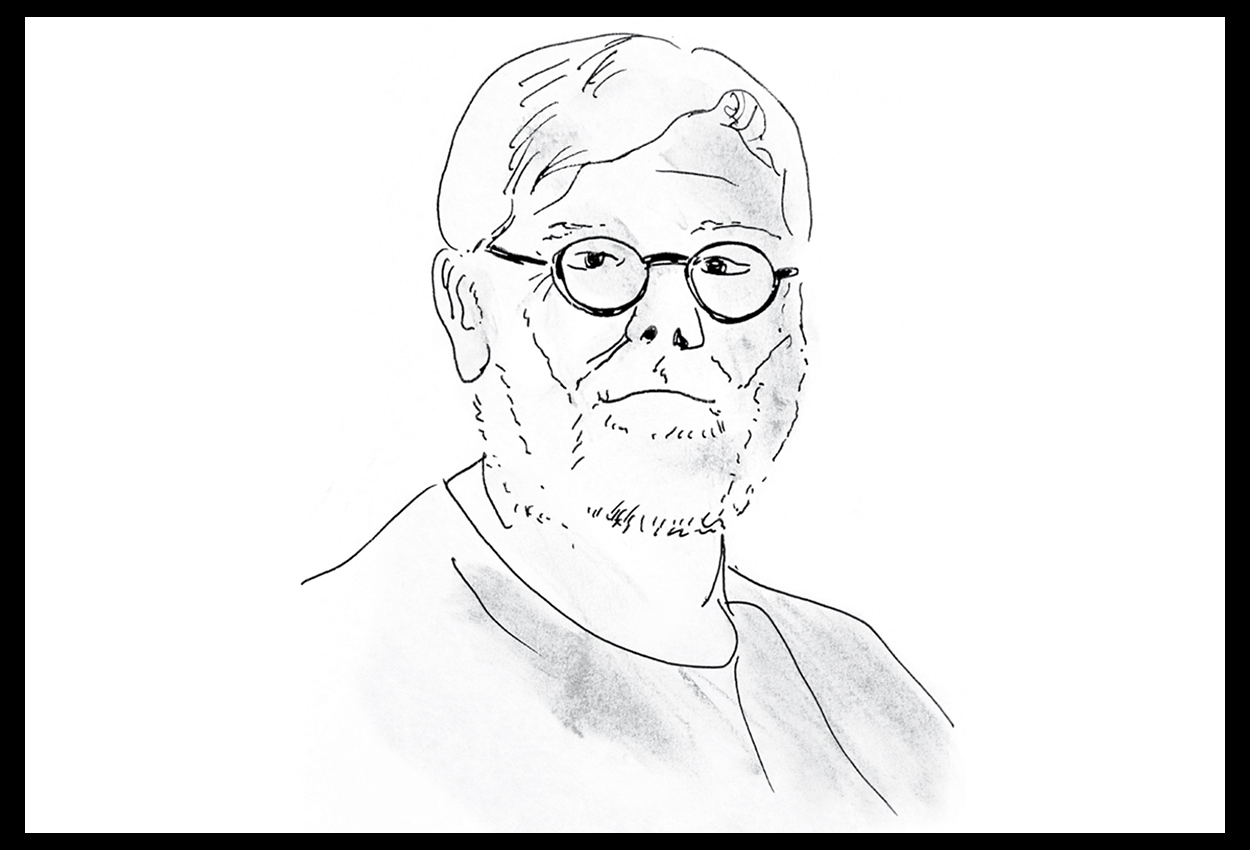 Multi-medium artist, John Mutsaers speaks on a life that has two homes — Holland and Gippsland.

John Mutsaers is a gifted multi-medium artist that creates remarkable pieces with oils, graphite, chalk, stone, steel and prose — to name only a few.

John was born in Eindhoven, Netherlands, in 1942, as the only son among five daughters. Following the destruction and violence of World War II, the Mutsaers' immigrated to Gippsland in 1956 in pursuit of a better life — a surprisingly common tale that forms the rich story of our region today.

With an observational eye refined over a long career of artistic practice, John proved an excellent source of tales on a life that has two homes — Holland and Traralgon. —

Can you please describe arriving in Gippsland?

Our arrival in Traralgon, straight from the ship that brought us from Europe, was quite an adventure. Nearly 62 years ago many Traralgon streets were just gravel and dirt, so we arrived by train. When my dad stepped off the train he said, “So, where are we? Is this the Wild West?”

The tale of your father burying his bus is a classic. Can you please share?

My Dad was a bus driver for the city bus company (Statsbusdienst) when World War II broke out. The German army occupied our city, and they appropriated all vehicles, buses, trucks, cars and motorbikes for the use of their army.

My Dad brought his company bus home, dug a hole in a field near our house, then drove the bus into it before covering it with oil-soaked cloth, earth and branches. In the early months after the War, his bus was the only one in service and my Dad was the only driver.

Your kindergarten drawing of the boy turning on the tap is another story that could be great to divulge with our readers...

Although I was only four-years-old at that time, I can still draw this drawing now. In those days drawings made by the children were never put on the walls of the classroom — at least not in my classroom! Heaven forbid. The Dutch are far too neat and tidy for that.

However, it was different this time. The nun was so impressed with my drawing that she taped it to the wall for all to see. Only years later did I realise why. At the age of four, children typically draw bodies as one whole circle; one big head, with arms and legs protruding from it. Apparently, I had drawn the body with a head, torso, arms and legs all in the right places.

For years I thought it was my rendition of the tap with water gushing from it that had astounded her so.

Can you please provide us with an overview of your artistic career to date?

In short, my career has been long (pardon the pun), and I have drawn and painted all my life. In the early years, uncles and cousins that were painters in Holland and Australia influenced me.

Australian artist John Balmain was my mentor and teacher. He taught me composition and the principles of tonal painting. Painters such as Archie Colquhoun, John Singer Sargent, Vincent van Gogh, Max Meldrum, Lucien Freud, Kees Bol all influence my work too.

However, this year is my 32nd year as a professional artist. So far I’ve held 37 solo exhibitions, including two successful international exhibitions; in London in 2006 and a group exhibition with selected Australian artists in Shanghai. The exhibition in Shanghai was held with the assistance of the Australian Trade Commission in 2008.

Also in 2008, I produced a set of sculptures in response to the United Nations call to end the world of hunger. These sculptures were originally placed around Federation Square, Melbourne, and later moved to the Princes Highway near Trafalgar. 2008 was the UNs ‘Year of the Potato’ and my sculptures depicted seven forks stuck into potatoes. The potatoes were carved from basalt rock and the piercing steel forks weigh 2.5 tonnes and stand 3.5 meters high.

My work is held all over the world in private and corporate collections such as:

You experienced substantial personal artistic development in Traralgon — was it the location or the people you were with that motivated you?

Traralgon was the home of my cousin, Frank Mutsaers, who was a baker at that time. Later, after moving to the Dandenong Ranges, he became a well-known Australian artist. Frank sponsored my family to migrate to Australia. He was always recognised as an artist in the family and was influential in my early career.

I won my first art award at the 1959 Traralgon & District Agricultural Show. I believe that the prize was 10 shillings ($1). I was also a member of Traralgon Music, Drama & Art Society (TMDA). Although I was fundamentally a member of the painting group I also appeared in several plays.

The old tin shed in a courtyard of the old Town Hall in Hotham Street holds some of my fondest memories of my time in Traralgon, and I still have friends from that period. To this day Traralgon remains a spiritual home for me.

I understand that you return to Holland on a regular basis. What do you miss from Gippsland and what do you look forward to returning to?

I miss not being in Holland when I am here and I miss being in Australia when I am over there. It makes no sense. I guess that you just can’t delete your ethnic heritage.

As a young migrant arriving in the fifties I tried very hard to become an Aussie, but the older I got, the more my Dutch roots emerged. Finally, I returned to the Netherlands in 2006, 50 years after leaving it, and felt so curiously at home.

Your recent series, The Infinite Birdcage, clearly demonstrates that you have a lot to say. That there's a strong creative fire inside you. Can you please outline your motivation for the series and your collaborations associated with the series?

The Infinite Birdcage is a collaborative project exploring the human need for freedom.

In this series, I am compelled to make a strong artistic statement in my paintings. Notable people who have a voice in the community contribute the music and text. I want to bring some light on the notion of freedom in the current world situation with the help of a number of prominent Australians who have diverse experiences and culture, which gives them a unique understanding of freedom. This artistic collaboration will result in a meaningful and significant statement, which is eminently topical.

The paintings in this series, although traditional in the first viewing, are laden with symbolism, using familiar everyday items that so often clutter our lives. The musician and the writer's’ job is to share their own understanding of ‘freedom’ using the paintings, and the items depicted, as a catalyst for their own story.

I am passionate about the human right to freedom and how each person, because of their different life experiences and culture, understands the nature of freedom from their own perspective.

In 2015, I started to develop a concept for a series of paintings about freedom, but the more I worked with the theme of ‘freedom’ the more I desired to engage with this topic in a much wider context.

The Infinite Birdcage series will be presented at a public exhibition augmented by a performance of musical composition and the written text. A CD and a publication will also be produced.

The following people have agreed to write for the series, so far:

The University of Melbourne, Director of the Board of the National Youth Mental Health Foundation.

— Dr Fiona Hill; Has a PhD in anthropology and specialises in the heritage and contemporary communities of the Arab region – with a special interest in Syria.

— Sir Gustav Nossal AC, CBE; Distinguished Australian research biologist. He is famous for his contributions to the fields of antibody formation and immunological tolerance.

— Mark Finsterer; Composer and musician is writing separate pieces of music in response to each painting. Mark studied composition with Franco Donatoni at the Accademia Musicale Chigiana in Siena, Italy.

In the 1950s Gippslanders were the most relaxed people on earth. Honesty and goodwill were their character traits. Unfortunately, this has changed.

Gippsland has not escaped the influences of capital cities and other world stimuli. It has become “sophisticated” — a condition they could not avoid under the pressure of modern living. These days it would be difficult to spot Gippslanders in a crowd in Melbourne. I remember in the early 60s man at a pedestrian crossing in Melbourne asked me where my farm was!

You've painted many stunning landscapes. Is there a region of Gippsland that you find particularly captivating?

These days I am more attracted to the inner landscapes of human rights and social justice.

Every now-and-then I find myself painting human environments, such as gardens and farms. There’s no shortage of stimuli in Gippsland in any characteristic — displayed or hidden.

Is it difficult to progress as an artist based in a regional area?

I think being in a culturally supportive environment is crucial to the development of any career. My career as an artist would have flourished sooner if I’d been in a capital city with an artistic soul.

At this point in your career, do thoughts of your ‘personal legacy’ cross your mind?

Oh yes… That’s why I want to paint about human rights and social justice. I have done reasonably well with my artwork and I’m no longer so much in need of an income from it. This gives me the freedom to contribute and paint (or sculpt) important themes, even to the possible sacrifice of my previous standing.