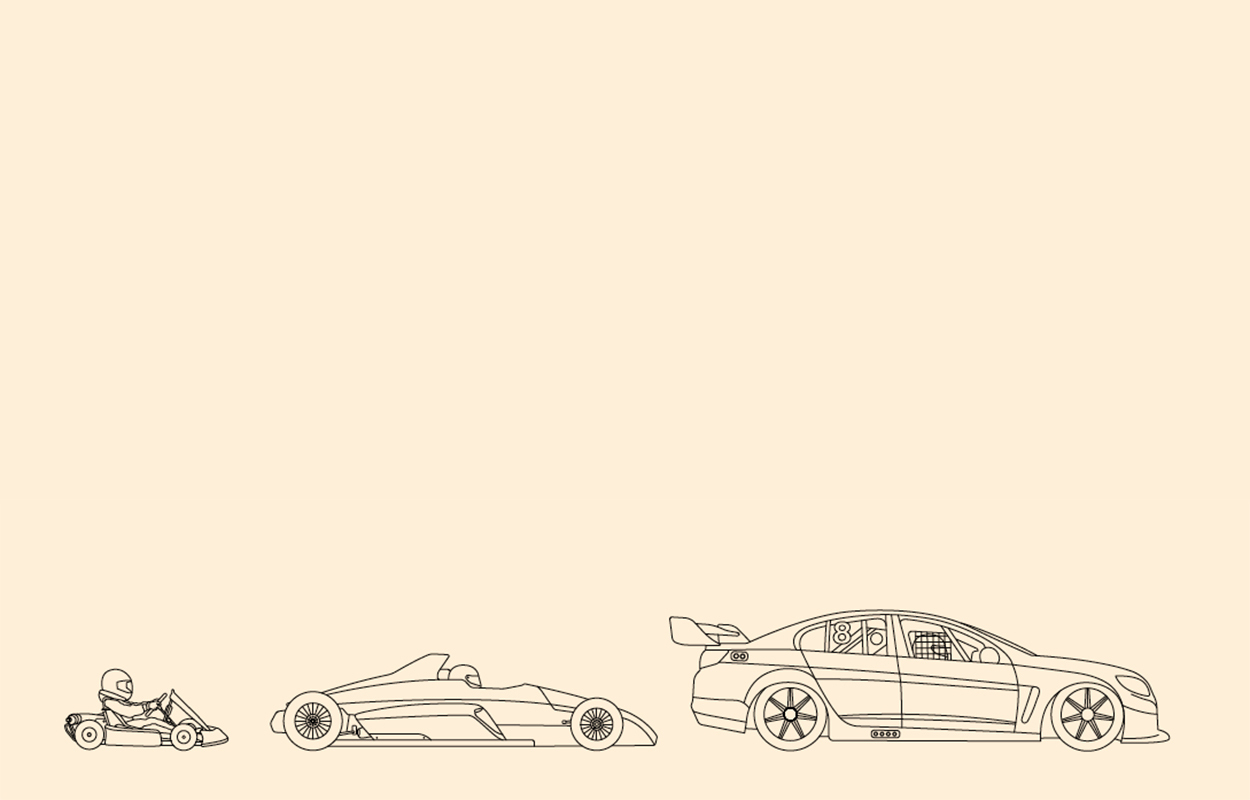 At the speed of Bright.

It takes a village to raise a child, but an entire community spawned an Australian motorsport legend – Jason Bright.

When it comes to sport and triumph at the highest level, Gippsland has a heritage to be proud of. We’ve produced it all – Melbourne Cup Champion, a swathe of Olympians, World Champions, Brownlow Medallists and an outstanding array of sportspeople who have represented not only Victoria, but Australia as well. For us, the outstanding results are a distant second, behind the stories of the people that set about creating them. Jason Bright is a perfect case in point. They say it takes an entire village to raise a child, but in this instance, an entire community spawned an Australian motorsport legend – who climbed to the top of his sport as deftly as he races to the top of Mount Panorama.
—

Jason had a seemingly common childhood with hours spent outdoors, riding bikes, playing soccer with his friends and racing radio controlled cars. Except that he also had a go-kart built from a lawnmower engine that did countless laps of the family’s Newborough backyard. As tearing up the yard in his makeshift race car, a young Jason would make regular trips to the Calder and Sandown raceways to watch races with his motorsport fanatic father, Ken. It was Calder Park Raceway where Jason was first exposed to motorsport, and just like that he discovered something many people spend a lifetime hunting, his passion.

This was Australia in the 1980s, a time where young boys grew up idolising men with impeccable perms, mullets and moustaches – guys like Brereton, Boon, Border and Brock. A time where the Latrobe Valley was booming and Ford’s and Holden’s dominated Australian driveways. As a 14-year-old, Jason began breaking down the steps and goals required to achieve his dream of becoming a race car driver. The Tramway Road Go-Kart Track had just opened in Morwell, giving kids like Jason a place to hone their skills, learn, compete and have a whole lot of fun. There was only one minor thing standing in his way to race – it’s helpful to have a go-kart. With the help of his parents, Jason put his life savings into his very first kart. At a cost of around $2000, it was a sizeable investment for a youngster. With a modest kart and a place to race, Jason quickly became the kid to beat at the track.

As the eighties drew to a close, 15-year-old Jason won the Junior Go-Kart Club Championship of Gippsland, which he backed-up with the Senior Championship just one year later. Jason’s parents Ken and Josie were alongside him every step of the way as he made the transition from go-karts to open wheelers in 1992. Jason’s stocks as a rising star of Australian motorsport continued to climb. In the early ’90s, Jason won the Formula Ford Championship, which included wins in the support races for the Australian Gran Prix and Indy 300, as well nominations for major awards. 1995 was the year of Jason’s coming of age in motorsport, as he debuted in Australia’s elite motor racing competition, the V8 Supercars. In 1996, Jason finished ninth at Symmons Plains, Tasmania. In just a few years he’d gone from a boy racing go-karts to an up and-coming-star in Australia’s biggest motor racing competition.

To be successful in motorsport takes talent, but talent alone seldom survives without support and financial backing. It’s easy to watch motorsport and only see a driver and a car, and be oblivious to the support teams involved; servicing the car, ensuring the safety of the driver, devising strategy and handling the logistics as the team travels from race to race. As Jason explains; “Back then I didn’t have the 75-80 people in our strong team that I’ve currently got taking care of our four cars. It was just Dad, my uncle, some other family members, friends and me”. Motorsport is an incredibly expensive pursuit. Consider the expenses of keeping your own car on the road. Then imagine the financial outlay required to keep a high performance machine on the track; one that requires constant tweaking, refinement and improvement every step of the way. How many kids would still be playing footy if they had to outlay for a new pair of boots every week? If it were not for Jason’s trusted support crew, and a few saviours through his journey, Jason’s career may have ended without his true potential realised.

From go-karts through to Formula Ford, Jason spent countless hours learning the mechanics of his car with his father, setting them up for a father-son bond that surpasses any sporting achievement. Gratefully, his family and friends would assist in keeping the car running and driving to races all over Australia. As is frequently the case in our regional communities, local businesses were reaching into their pocketsand sponsoring Jason’s endeavours.

Despite his impressive results and the promise his career showed, there was only so much generosity Jason could stomach, so he entered The Lexmark Indy 300 believing it would be his last event before returning home and focussing on his other career as a fitter and turner with Skilled. “The support had been amazing, but it was difficult to crack into a full professional career. I felt it was getting to the point where people, particularly my parents, were putting in more (money) than they could afford in tough times”, describes Jason. But while at the Gold Coast event a wealthy businessman, motorsport lover and father of one of Jason’s old competitor’s came forward and gave Jason his first big break.

Without the stress of managing his own vehicle, team and finances hanging over his shoulders, Jason went from strength to strength. In 1998, the boy from Newborough won the most famous car race in Australia – the Bathurst 1000. As impressive as his victory was, it was Jason’s humble response that was further endearing. To demonstrate his gratitude to the community that had assisted him in achieving his goals, he invited them to join in the celebrations when he returned home by placing the winning vehicle on show for all to see. “It was a really hard time for people back then, not unlike now. We were dealing with the privatisation of the SEC (State Electricity Commission) and the Jaidyn Leskie tragedy, so come home and be able to thank the community, have a ticker tape parade and drive the car from Moe to Morwell was something I’ll never forget” recalls Jason.

Since his memorable first Bathurst victory, Jason has since raced in over 550 motorsport races all around the world. Throughout his 29-year racing career(and still going strong), Jason has dedicated himself to getting the most out of himself and his vehicles,
while doing the thing he loves. He’s been showered in champagne on the podium after nearly 90 races and has been the victor in 20 of those races.

Although, several corporate sponsors have come and gone over the course of his career, his personal support team has never wavered. “Mum and Dad still get along to every race they can, and having my wife and two young children with me on the grid before a big race is a huge thrill”, says Jason. Now, aged 44 and in the twilight of his racing career, Jason has found a new passion, TaskForce, a business venture that he’s attacking with the same vigour you’d come to expect from a man that loves to push a V8 to its limits. TaskForce connects consumers with various tradies in a single location, while providing tradies with the support they need to grow their business by lowering overheads and accessing a support network.

Even with his ongoing racing career, a young family and a growing business, Jason still finds the time to get home to see his parents Ken and Josie, who now reside in Drouin, and when the opportunity presents itself to head back to the Valley, a drive along Haunted Hills Road is always high on Jason’s agenda. As for the future of motorsport in the region, Jason believes, “Gippsland has always been a great breeding ground (for talented drivers), the family atmosphere and competition is consistently strong”.

For anyone that’s ever driven past the Gippsland Go-Kart Track in Morwell on race day, you’ll know how jam-packed with budding drivers the place can be. Who knows, with talent, luck and a supportive community, a future Bathurst Champion may be blazing down the home straight now.