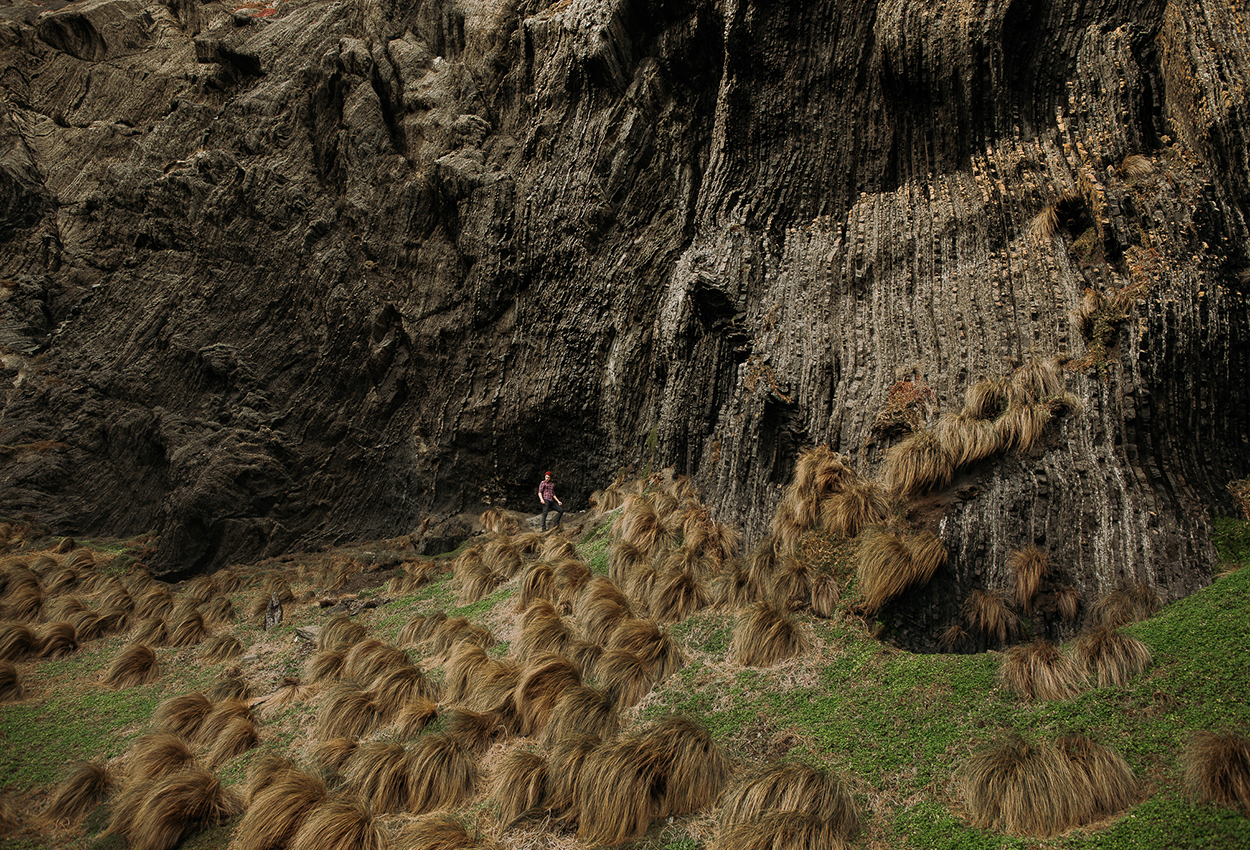 How can the Gippsland Panther possibly avoid what it does not know exists? To achieve this, Arnald builds a hide.

A cold shudder, the crisp, salty taste of the brisk sea air, and a trail of markings and bone that allude to its existence, it all becomes clear why Arnald Olsen has rewritten his life in search of the infamous Gippsland Panther.

There’s often merit to folklore; tales told by generations past of mythical creatures that were used to develop law and order within communities. Adults often exploiting the element of fear to maintain control and reign over their children. Stories, unlike law, embrace emotion, plausible philosophies and relatable events that often cause the listener to question the possibility of doubt and, therefore, become more invested in the idea. This is what constitutes a myth. 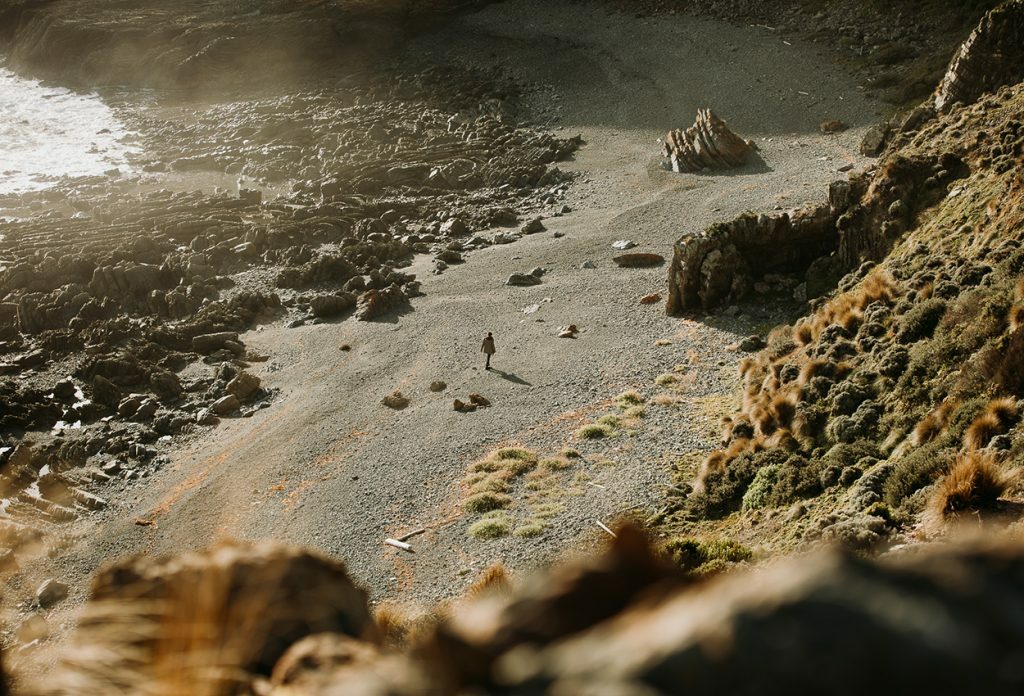 However, what if the same story begins to be told between the extreme corners of a region, shared across different demographics and generations? Fleets of people unaffiliated with each other identifying traces of the same dark-furred, larger-than-the-average-dog predatory cat. What if farmers across all types of land notice rapid reductions in livestock numbers, unexplainable claw marks on trees, soil and stone? When tourists, new to the region, report back to their friends and family about ‘large, fast-moving cat-shaped creatures’ after expeditions into our scenic drives and remote areas of wilderness, then something really begins to feel askew, and authenticity begins to associate itself with the existence of such an animal.

Recently a reader by the name of Anthony wrote to Arnald outlining a recent encounter in Gippsland’s southern coastal region. After an initial review of the compelling evidence provided, it was clear that this was the next destination Arnald needed to pursue. Having only recently returned from a visit to his homeland of Norway, the seaswept cliffs of Gippsland’s coasts seemed like the most obvious choice of hunting ground for the seemingly illusory feline. 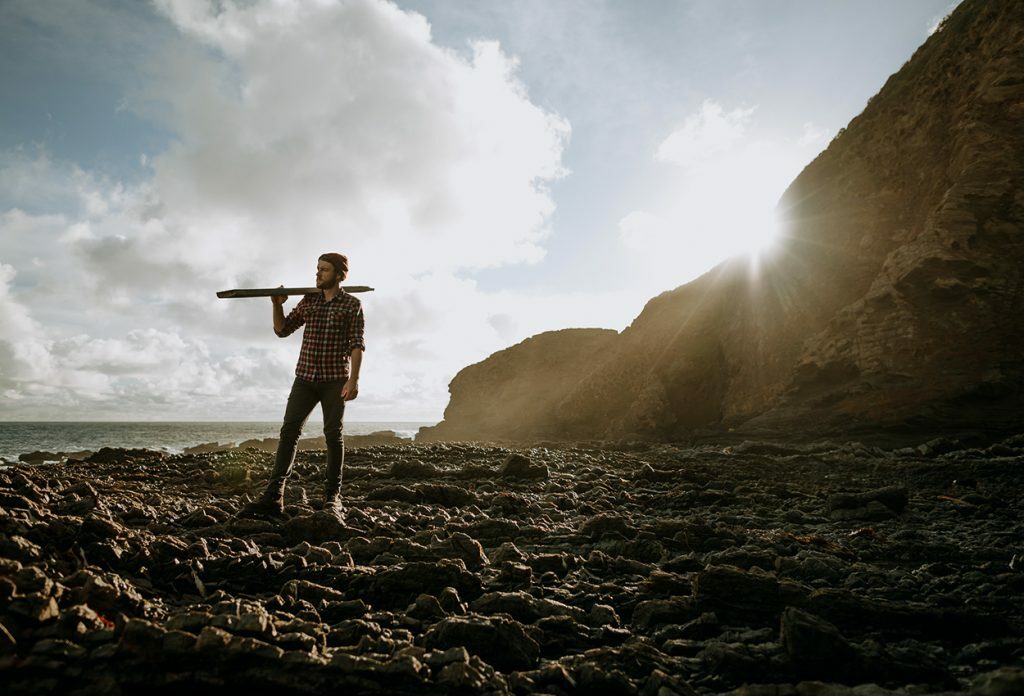 With the misty flavours of a well-executed pursuit fresh on our hunter’s tongue, Arnald’s first steps on the windswept sand felt almost relieving, honing his focus entirely on the chase. A consideration often overlooked is the nature of this particular beast. When your prey is a predatory cat, it’s difficult to be anything other than one step behind their incredibly cunning and strategic existence. This time, however, Arnald had been upskilled. His recent training with the hunters of the Norwegian highlands had taught him the incredible power of patience. Given the task at hand, the concept of chasing and always remaining one step behind is destined for failure. The alternative—to sit and wait for the prey come to you. If one can survive without any trace, movement, or notable presence, how can the black cat possibly avoid what it does not know exists? And to achieve this? build a hide. 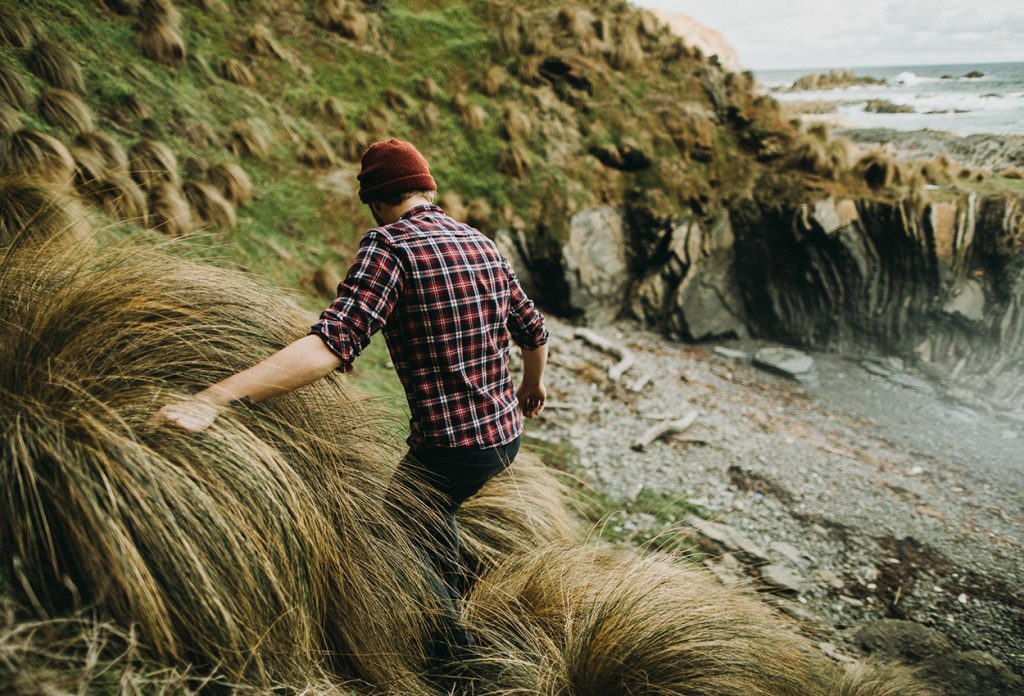 Upon reaching the black stone beach nested below a series of cliffs, where he could leave no footprints or scent, Arnald's exploration led him to a mountain cave that confirmed what he was searching for. The discovery of tooth-scarred bones in this oddly protected area of an otherwise lifeless mountainside, fur attached to seaside grasses and evidence of routine movement along lightly worn trails—the telltale signs of the prey he pursued was clearly defined. The next stage of the hunt was ready to commence. 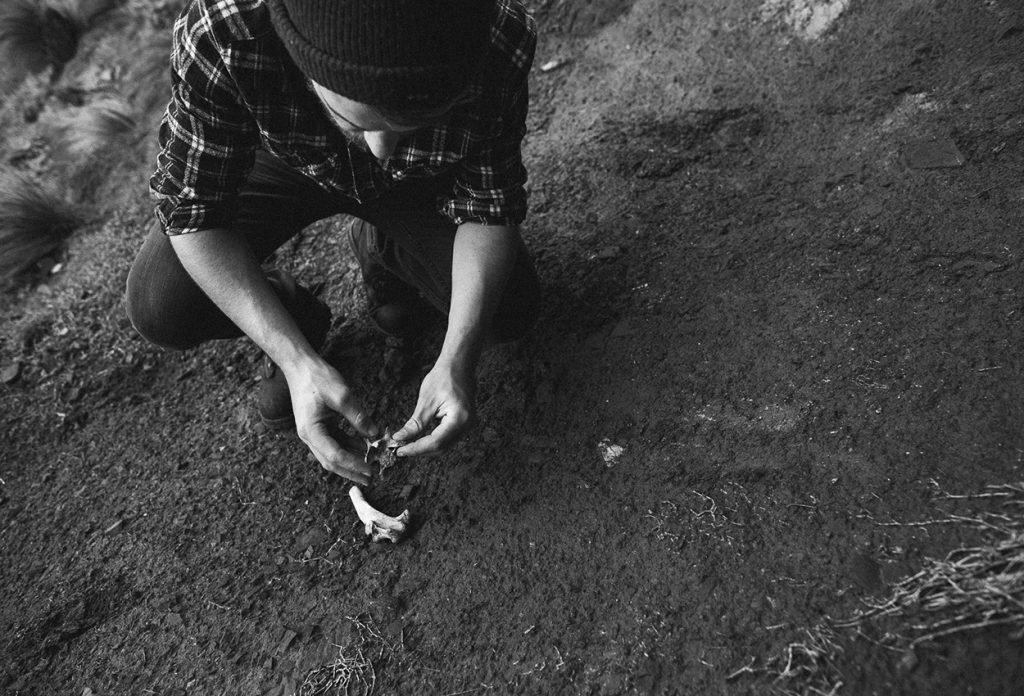 After discovering a section of beach, the panther had been using as an intermediate route between the sanctuary of the caves and the open plains above, Arnald began the construction of his hide. A type of makeshift hut in the cavity of a large and fragmented boulder, constructed with from the abundant materials that have drifted onto this remote coastline. Arnald will be calling this hide his home for the next several months, as he waits in perfect silence, hidden from view, for the single opportunity to strike and claim his trophy. 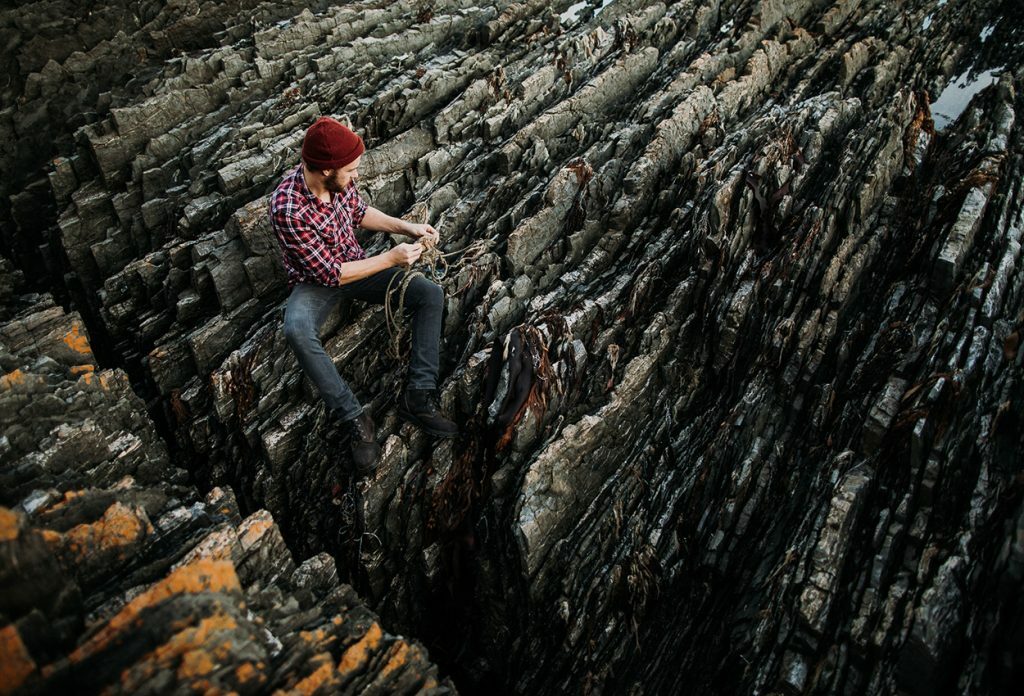 Head here to read parts One, Two, Three, Four and Five of the hunt for the Gippsland Panther. 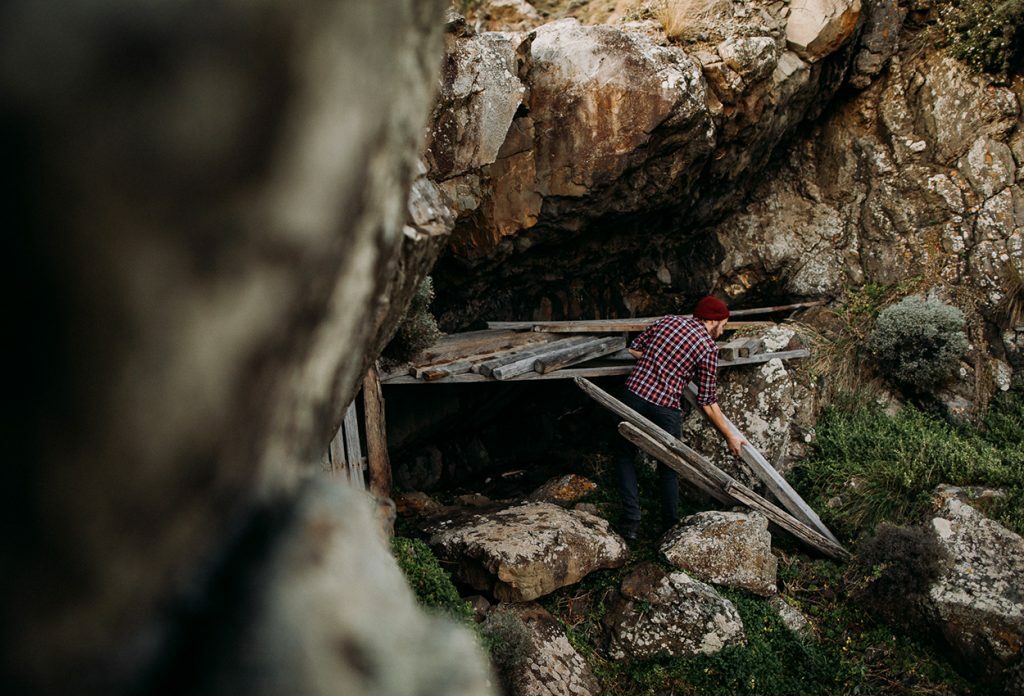 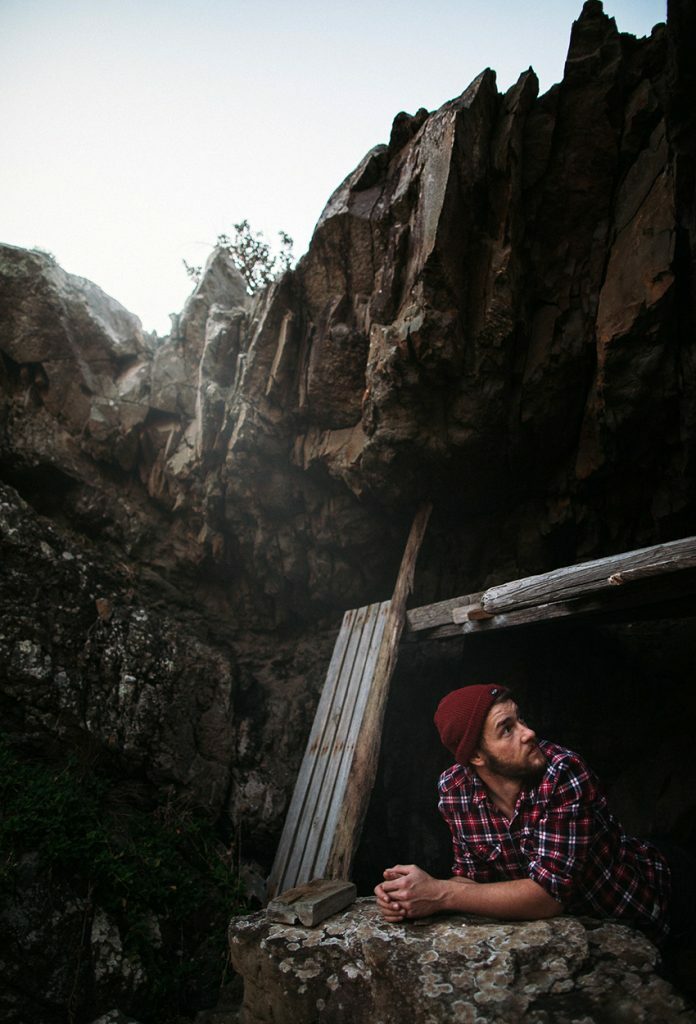