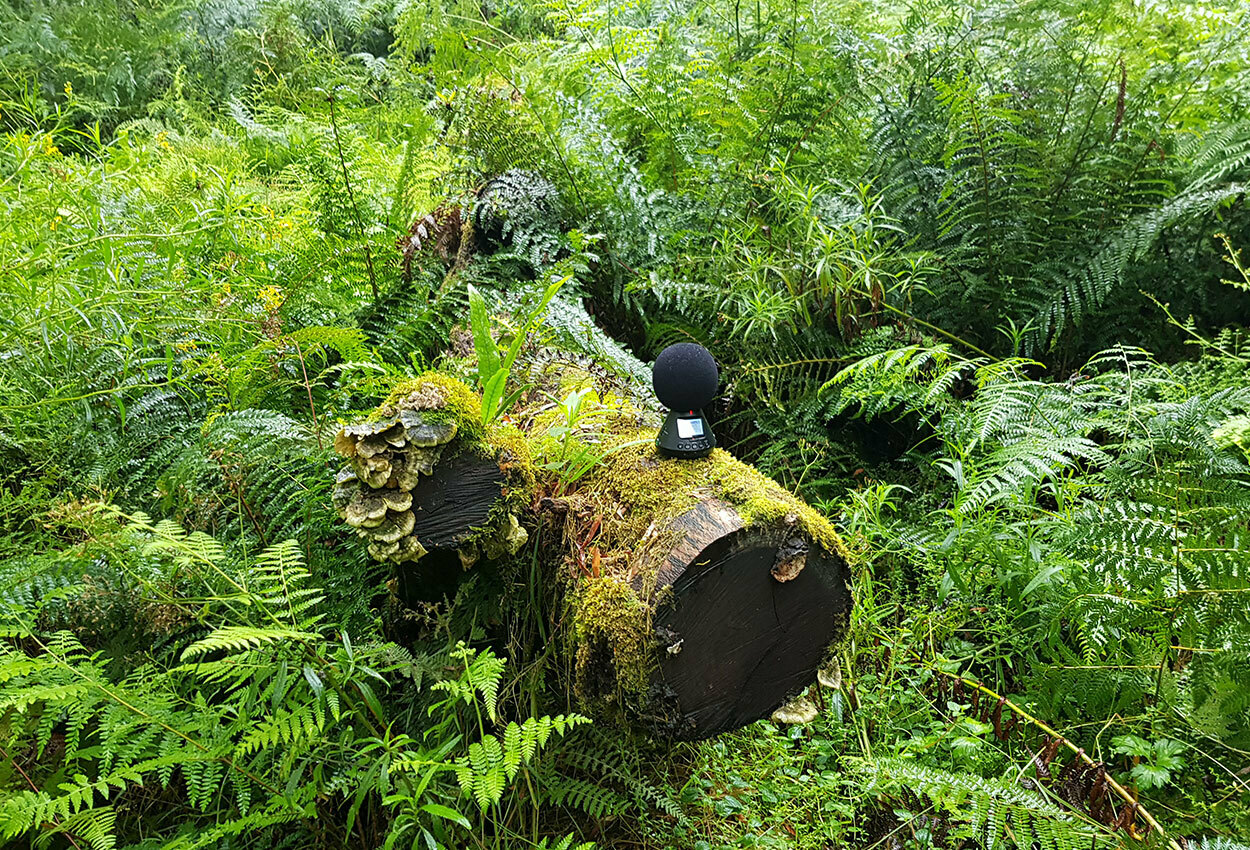 Sound is all around us. It’s inescapable. Yet, are we actually listening?

Waking up slightly grumpy, you thump your way down to the kitchen. A spoon clinks on a ceramic cup. Scrolling through your phone mindlessly…The hiss of the kettle boiling. The fridge hums, the roof creaks, the birds chirp, a car passes in the distance, a truck rumbles. You turn on the TV, drowning out the birds. The clock is ticking... Late for work, again. Sighing loudly, you slam the door and the house shakes — the cat lets out a little meow as she wakes, then flitters around before finding her food bowl.

Sound is all around us. It’s inescapable. Invisible waves of vibrations sent from the physical movement of objects shifting through time and space. Yet, are we actually listening, especially in a world of Instagram, Facebook, smartphones, the Internet and television?

Technology can be sonically assaulting. Blaring advertisements, grating mechanical sounds and cacophonies of noise in badly designed public spaces. Out of frustration we hit the mute button or put on headphones — curating our own personal soundtracks to screen out the noise. As a consequence of this overwhelming visual and technological stimuli, we are at risk of becoming disconnected with our own communities and our environments. We see the world, but we often neglect the full range of sonic and sensory delights it has to offer.

Sound affects humans, animals and birds in profound and interesting ways. It can be a cause of great anxiety, fear, intense focus, irritation, excitement, relaxation and joy.

Recent research has found when we hear the sound of a baby crying, we are physically hardwired to respond with sympathy. [1] In nature, low bass sounds can signal threat and aggression to animals and humans alike. [2] Higher-pitched sounds like sirens, screams, or nails on a chalkboard can physiologically and mentally arouse our attention with fear responses, possibly due to inbuilt genetic survival mechanisms.[3]

Acoustic ecology or soundscapes studies focus on the relationship between humans and our natural and artificial sound environments through practices such as active listening. [4] The practice of field recording is a tool applied in acoustic ecology studies. It is useful in tracking population numbers and the behaviour of birds, fish and animals. It can also serve as a way of capturing the past and tracking the changes in the environment and technology over time.

Indeed, from a sonic perspective, Gippsland is full of wonderfully diverse sounds and ecosystems. From the squawks of yellow-ailed black cockatoos flying above Tarra-Bulga, or the croaks of the endangered growling grass frogs bellowing away in the Gippsland Lakes, to a myriad of insects, squirming giant earthworms, rumbling oceans, splashing marine creatures, lapping rivers, the creaking sways of towering mountain ash and many thundering waterfalls.

Gippsland’s man-made sounds are also quite distinct. There are zooming Royal Roulettes from Sale and the hums and the whirs of the megaliths of the Latrobe Valley power industry too. Every single building, park, town or environment has its own distinct set of sounds and dominant sound markers. Understanding our sonic surroundings can heighten the experience of the environments we inhabit, drawing our attention to things we may not have noticed before.

The closure of Hazelwood Power Station in the Latrobe Valley significantly changed the sound environment of the area. I remember walking outside one night noticing that the ‘hum’ was gone. Suddenly, the night was ‘silent’. No longer could I hear the sound of high-pressure water hoses cleaning out the boilers, or the whir and hum churning away in the background. After living within a five-kilometre radius of the station for over 10 years, the sudden disappearance of the sound was a revelation to me.

From this, and similarly profound Gippsland sound experiences, I came up with the idea to create an online database and field recording project — Found Sounds Gippsland. The database will be able to be used to help identify and bring awareness to the distinct sounds of our area via Google Maps tracking. This database can then be used as an educational tool and a historical record of time and place.

Since September 2019, a field recording assistant (drumming maestro Steve Schulz) and I have been driving (and walking) all over Gippsland visiting a diverse range of places such as Inverloch, Mount Worth, Tarra-Bulga, the Latrobe Valley, Lake Glenmaggie, Noojee, Toorongo Falls, Blue Pools, Walhalla, Mirboo North and numerous farms, residential streets and industrial areas. Each trip can take between 3–10 hours, depending on location, weather and traffic conditions. After each trip, recordings are then cleaned up and edited for stereo or ambisonic application. Minimal processing is undertaken, as my intention is to accurately document the environment as best I can.

The recent fires in NSW and VIC are a good example of why I feel such field recording projects are important. Conservative estimates claim that at least one billion animals, birds and insects have been lost due to the unfathomable destruction of the fires. [5] These damaged ecosystems are now significantly changed — never again to be heard as they once were.

Country areas, like Gippsland, have what soundscape studies pioneer R. Murray Schafer would call a “hi-fi definition environment”, in comparison to ‘lo-fi’ environments such as Melbourne. This is due to our sparsely populated areas and wide-open spaces that help sound travel farther. There is also less noise pollution, allowing sounds to be clearer and more defined.

Over time, our environments will undoubtedly change. Looking further into the future, our vehicles and machinery may be replaced with different technologies. Just as the arrival of the Industrial Revolution introduced new noises, our future will sound a lot different from today.

We are truly lucky to experience Gippsland’s unique symphony at our doorstep, so take some time to listen to the world around you. You won’t regret it.

3. Christoph Reuter ‘Psychoacoustics of Chalkboard Squeaking’ The Journal of the Acoustical Society of America, Vol 130, Issue 4, 2011.

4. R. Murray Schafer, The Soundscape : Our Sonic Environment and the Tuning of the World /
[eReserve]. Rochester, Vt. : [United States]: Destiny ; Distributed to the Book Trade in the United States by American International Distribution, 1994.