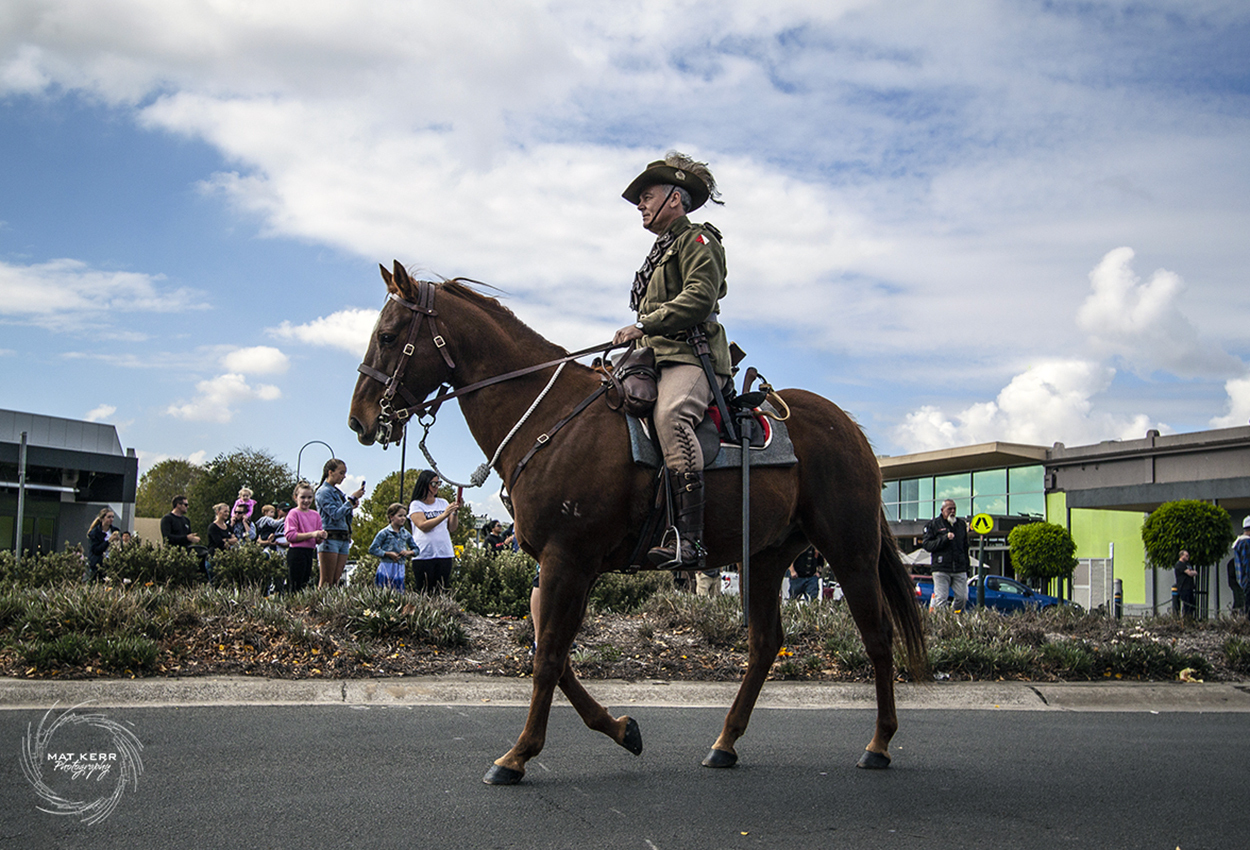 ANZAC Day at the Traralgon Courthouse.

Whilst age may have wearied them stalwart veterans, now numbering seven, made their way to the Cenotaph in Kay Street, Traralgon.

Words: David Hackford on behalf of the Friends of the Traralgon Courthouse

The Court was again in session this ANZAC Day when the Friends of the Traralgon Courthouse Inc. with the support of the RSL and Traralgon Band put its support behind the ANZAC Day Service activating the historic courthouse space and its curtilage for the broader community.

The Group organised a Walk in Art Exhibition inside the building’s walls appropriate themed “Life After War” in which local and artists of all ages displayed work. The exhibition was sponsored by Alan Wilson Insurance Brokers, Latrobe First National Real Estate and Morwell Art and Framing and was substantially organised by local artist Libby Witchell. All work was of a high standard, though the first prize was awarded to Frank Mesaric for his work “Arna, Watch Tower and Helicopter”.

The Group, assisted by local artisan Eleanor Marguerite who themed the event for the second year sourced local people in the supply of homemade ANZAC biscuits, brewed coffee, tea and cake, carefully themed to suit the occasion. Local businesswoman Bronwyn Kerr turned on her BBQs to serve bacon and egg sandwiches. The combined aromas drew Diggers from near and far.

On a day where the world remembers the contributions Australian and New Zealand forces made to war efforts, original vehicles used in World War Two returned and flanked a town square outside of the Traralgon Courthouse and Post Office Building.

Whilst age may have wearied them stalwart veterans, numbering seven, made their way to the Cenotaph in Kay Street in a fleet of locally owned British Rolls Royce Motor Vehicles organised by local businessmen Alan Wilson and Garth Hackford. They were joined at the cenotaph by a constabulary of local dignitary, forces, cadets, scouts, students and community groups.

A bronze statue of Sir Walter McFarlane Burnett, (former Traralgon citizen who was awarded a Nobel Prize for Medicine in 1960 for advancing the understanding of infectious diseases and their prevention and treatment) oversaw proceedings, suitably adorned by the Australian Flag on that day.

The Traralgon Court House itself is part of a larger Public Offices group which includes the Post Office and a Receipt and Pay Office built in 1885-86. The latter Office was demolished in the 1960s to make way for the existing additions to the Post Office. The present clock tower on the Post Office was added to the original design late in 1886. It is a highly ornate and visually dominant building reflecting the growth and maturity of Traralgon in the late 19th century.

The Traralgon Post Office and Court House are included on the Victorian Heritage Register (VHR H1488) and the Heritage Overlay of the Latrobe City Council Planning Scheme (item HO4). Both these listings provide statutory protection to both buildings and ensure their appropriate conservation. This can also make upgrade works a slow process as permit applications are required for everything but exempt works (essentially maintenance in nature) though group have the support of a heritage architect based in East Melbourne, also born in the Traralgon Area and whose lineal descents reside or are buried here.

Heritage Victoria has expressed a view that these applications should include the non–historic 1950’s section of the building, not under the control of the Group which has complicated the situation both for Latrobe City and the Group.

The exterior of the existing building has undergone substantial asset preservation works including the cleaning of the slate roof, complete replacement of flashings, gutters and downpipes as well as extensive timber joinery repairs/replacement. Subject to the constraints imposed by application referred to, the Group supported by Latrobe City Council applies for government and community grants to perform internal works necessary to enable activation of the site for general community use, but has no guarantee of funding. It this relies upon its own efforts to fund works by membership fees hire fees and general fundraising in order to fulfil its purpose.

Works may seem slow, though much of what has occurred over the past few years is not visible to the naked eye. The whole of the community is encouraged to join the group or seek to utilise the space by hire.

Those interested in a membership, or simply liking the group’s Facebook page should visit it at Facebook Friends of the Courthouse Inc or else emailing enquiry to Courthouse1886@gmail.com.

We will remember them.