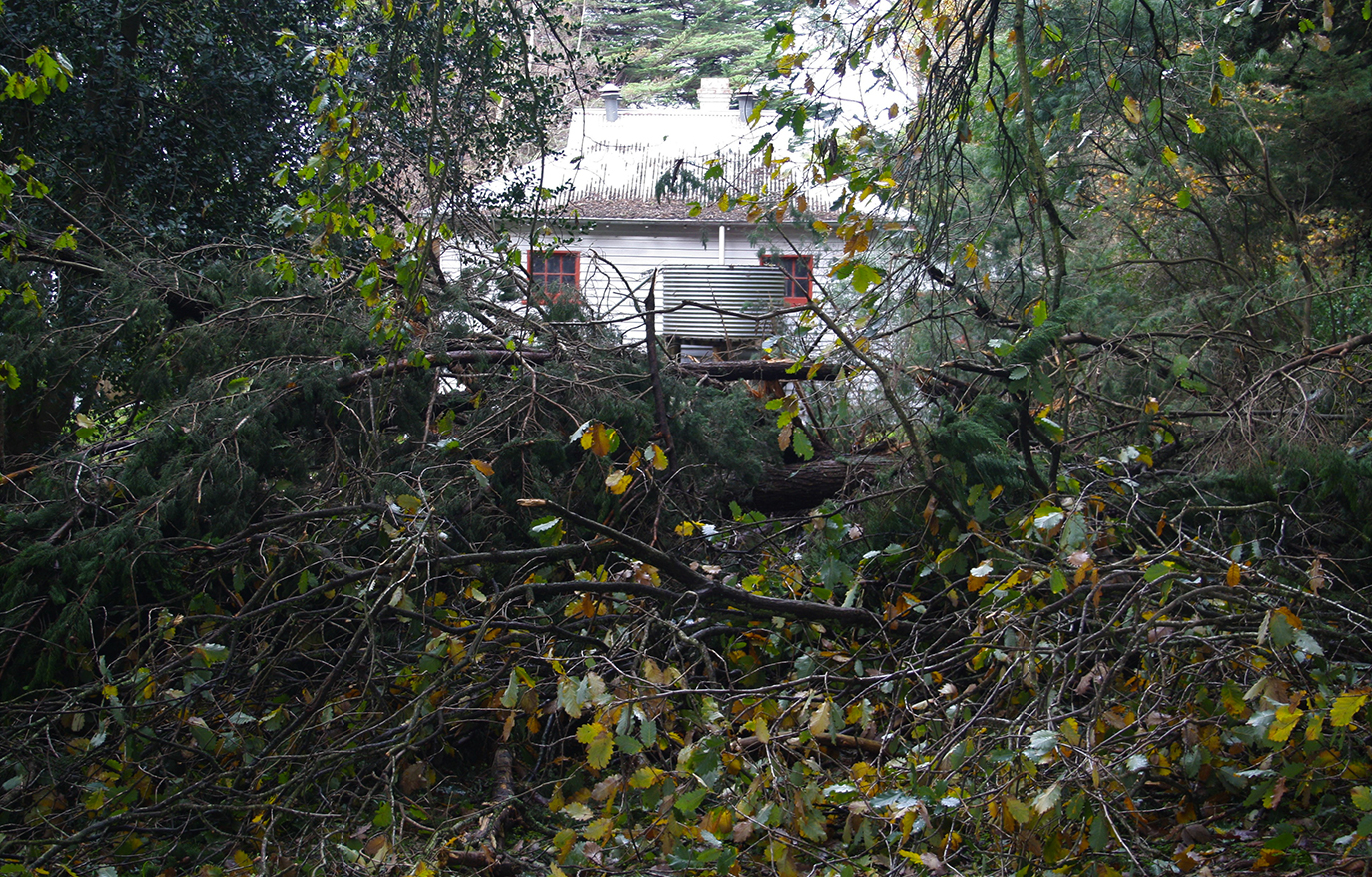 Potter, Owen Rye writes that 'the ancient gods had missed us up until June 9, but now they have had their say, and we have our personal disaster...'

I listen to the news and read The Age every day. News reports are always about something happening somewhere else, away from this quiet isolated place. But for a short time, we were the news.

Not us specifically, it was generally about the storm that lashed the Dandenongs and parts of Gippsland on June 9. I have never experienced wind like it, even though we are familiar with gales. After all the old Roaring Forties are not far to the south of us. But this was far beyond the ordinary gale. I sat at midnight in the dark, wondering what we would do when the house roof blew off. My son Tom who lives with me said it was worst a little later, while I was asleep.

I was not aware for some time how general the storm was. I did not have a working radio. With no electricity, there was no television, no internet. The papers could not be delivered for a few days. Near us, there was a tree across the road about every 25 metres so it was impossible to go anywhere – or deliver papers.

Locals first cleared a path through the tangle, so two days in it was possible to weave a dodgem course between the trunks of fallen trees, often with gaps just a few centimetres wider than my ute. The leaf debris on the road combined with the rain made the roads extremely slippery. Going anywhere was an adventure. On the first trip, my only emotion was astonishment, realising what had just happened. Soon one of those electronic road signs appeared on the roadside outside our place. It flashed alternating warnings. One said Road Closed. The other said Multiple Trees Down. 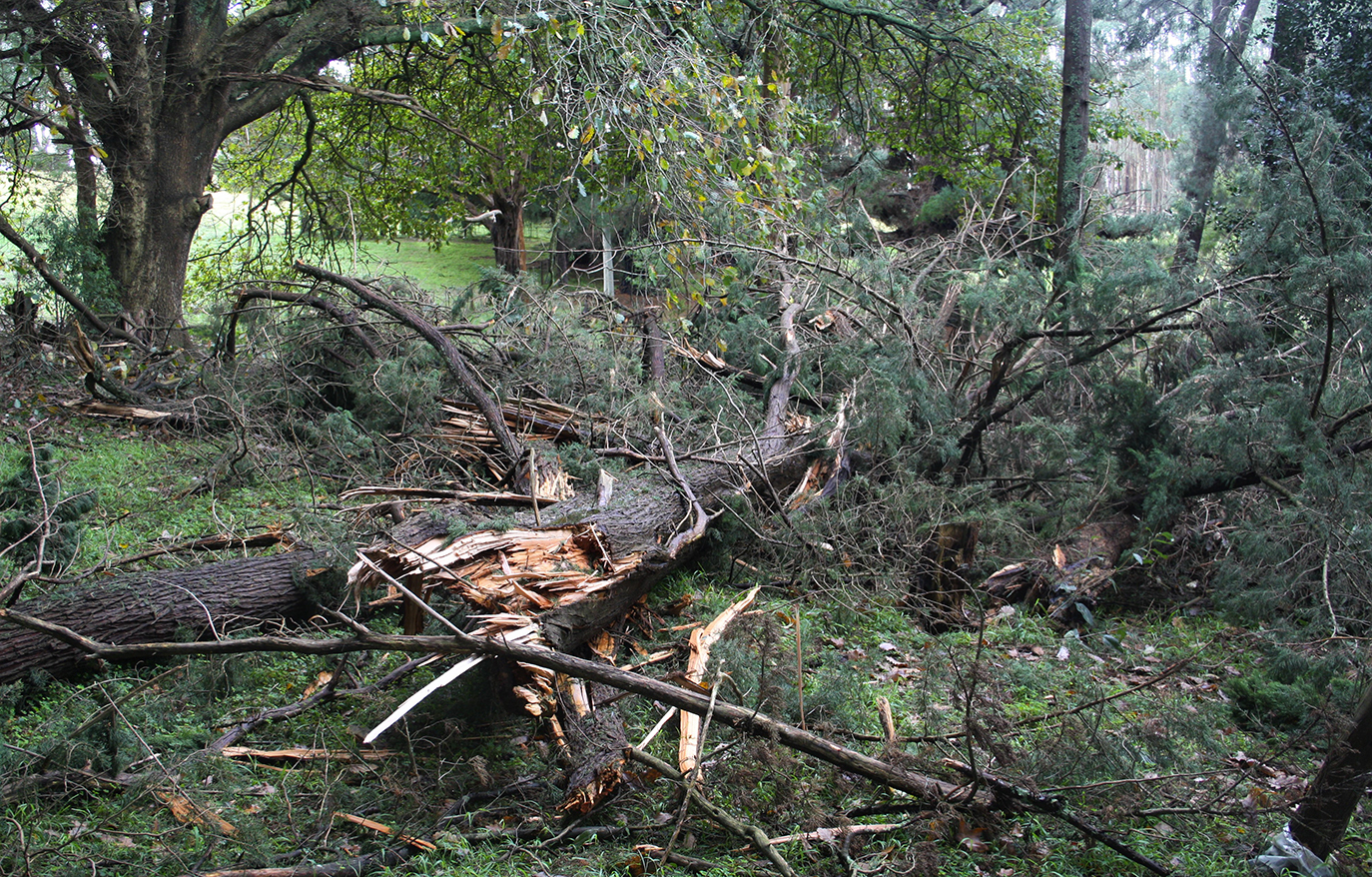 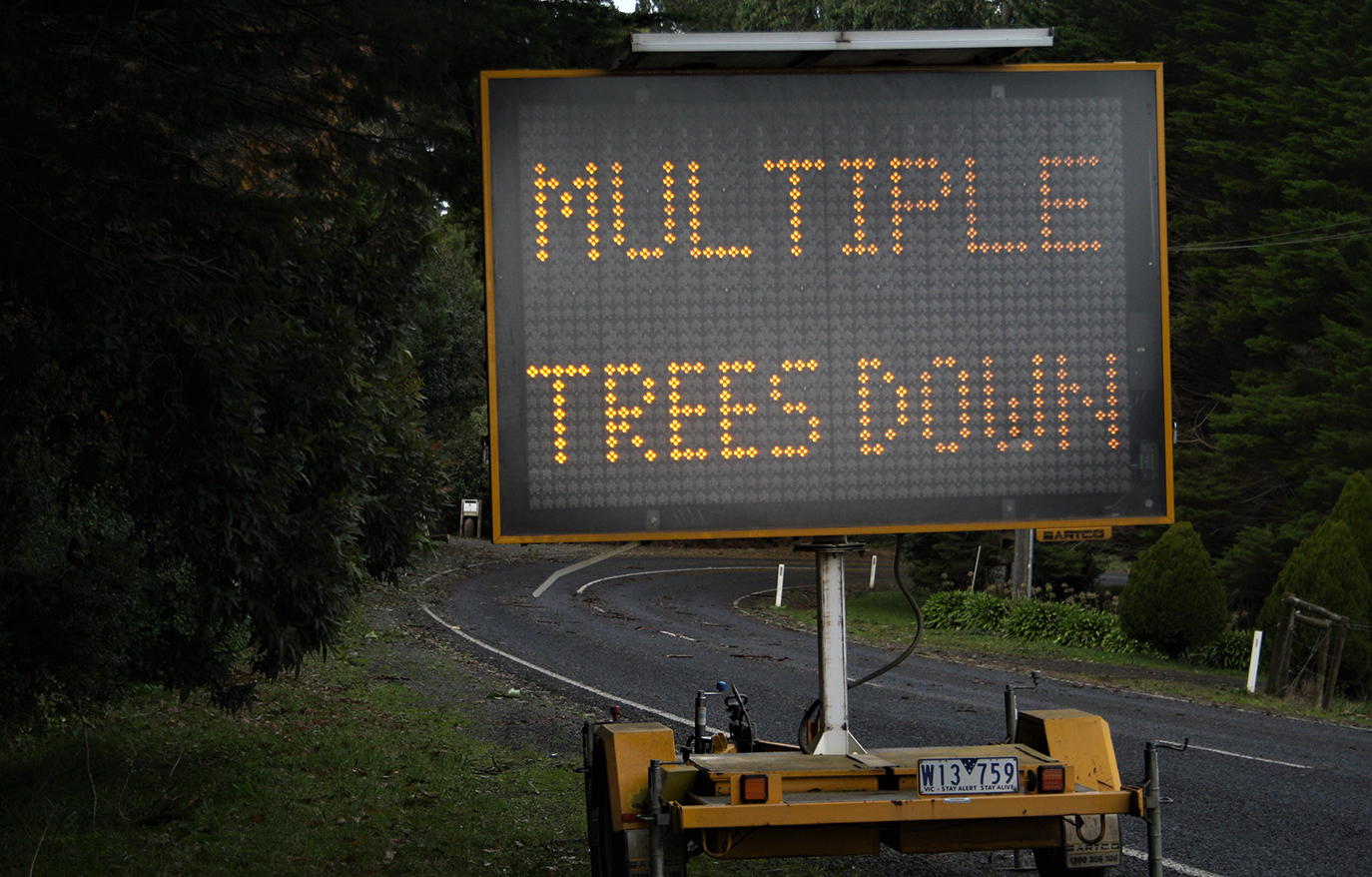 “She has probably blown the capacitor". I now know the generator is female. And I had no idea she indulged in that kind of behaviour.

When the road was passable, we could get to the local small supermarket, 14 kilometres away. But their fridges and freezers were empty. Like us, they had to throw out all the contents because they had no power. For us, shopping for food was for one night only – eat what you got that day, the next day it would be inedible. Veganism and vegetarianism finally made sense.

We take all the conveniences of electric power for granted. Hit the switch, a light comes on. We have heaters and washing machines and all the comforts of modern living. But when it all goes nothing works. Here in rural isolation water comes from the taps because of an electric pump. No power, no water. The gas stovetop was the only relief, it was possible to cook, and boil water gathered from a tap on the tank outside, to make tea or have an uncomfortable wash.

It rains frequently here in Boolarra South. When we built the house, I had a remote-controlled garage door installed. Push a button, drive in, push the button again and the garage door closes. Enter the house dry. While the power was off, I had to get out in the pouring rain and open the door manually. Then with wet clothes enter the cold damp house, already saturated with moisture. Thinking that some people were worse off was no help at all, when everything including me was cold and wet. The worst was getting into a freezing bed at night. No electric blanket.

The lights went out around six at night on June 9. Using a head torch (I must replace those batteries – have I got any?) I dragged out the generator. It produced no electricity. I have an electronic charger that can start the car when the battery is flat, and it has outlets to charge phones. I got it out and found that the last time I used it I left it switched on. It's flat. Later I discover it’s not much of a problem because there is no phone reception anyway. We get out the small transistor radio to hear the news. Batteries are flat. Put in new ones but the radio is kaput anyway. It's in the bin now. Half an hour after the electrics went, it was time to sit and cry but I didn’t have the energy.

A week later the man in the generator repair place said: ‘She has probably blown the capacitor’. I now know the generator is female. And I had no idea she indulged in that kind of behaviour. Thanks to my mate Russell, who has four generators, we had the loan of one and could have showers – the water is heated by gas – and could have the lights on at night. And the electric blanket.

Nine days is a long time to go without electricity especially knowing it was gradually being restored elsewhere. An article in the Age (19/6) showed that eight houses in South Gippsland on Friday the 18th were still without power. We were one of them. The lights came on at the end of that day and for a while I sat there, confused, not sure what was happening – there was a light but nobody was there, carrying a torch. It took a minute to realise we were again privileged to enjoy the comforts of the Western world. 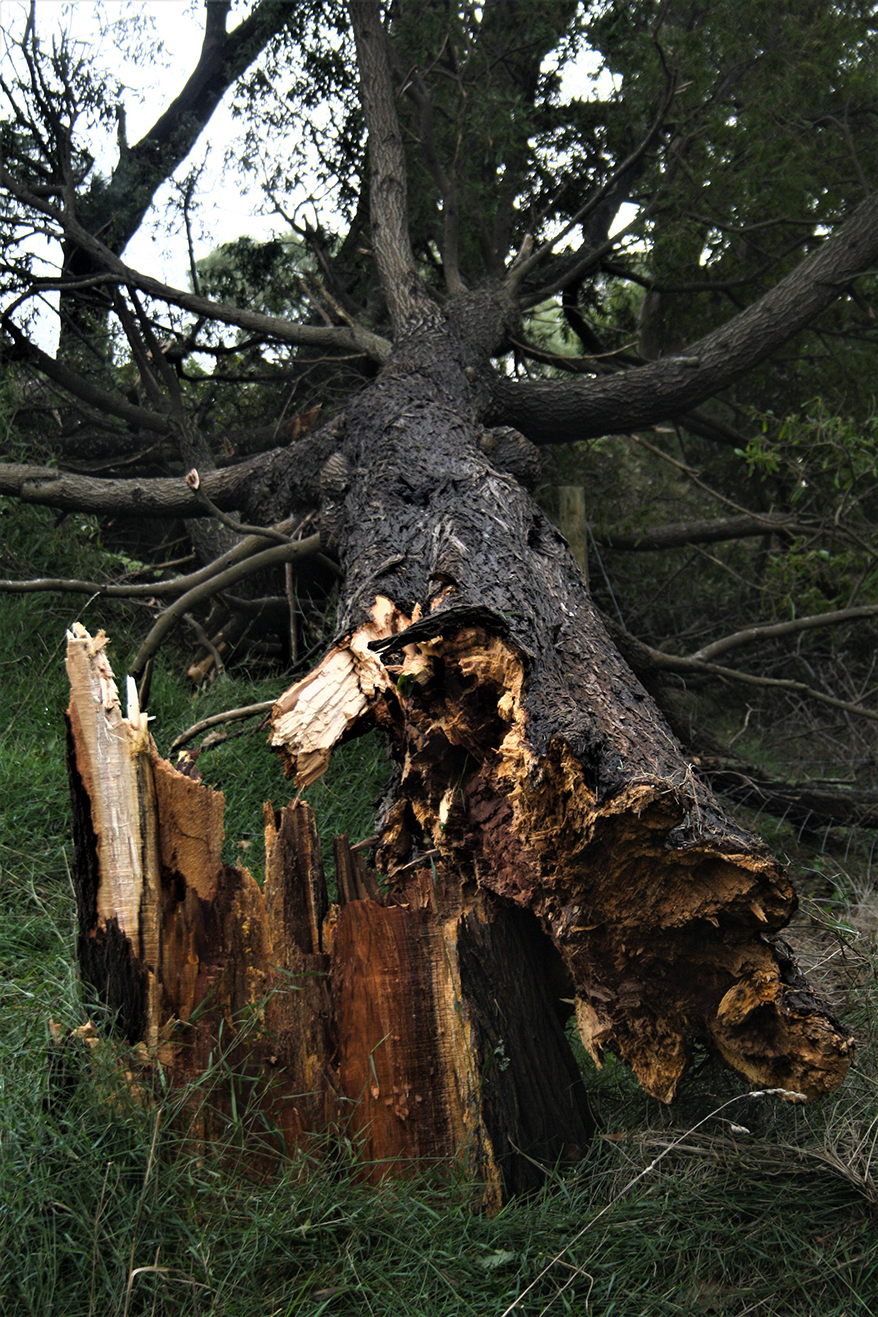 Almost everyone I tell about the damage and the lack of electrics gives the standard answer. ‘At least you will have plenty of firewood’. It’s a bit like saying to someone whose house has just burned down in a firestorm ‘Well, at least now you get to build a new house’. It’s easier to just say yes and move on, it would take too long to present the facts. Which are: there is so much wood on the ground that it will take me and Tom at least three or four months to cut it all up. In some areas, chainsaw oil has been sold out and it’s impossible to start cutting. But even if I did it would take a few years for the wood to dry out enough to burn in the wood heater. Gary, who normally brings our firewood charges about $300 for enough to keep us going through winter. There is the equation: three months work to save three hundred dollars in three years’ time – or rely on Gary. I’ll rely on Gary.

The alternative to the three months labour is to have the professional tree people come in and do the job. I have had them here before to fix damaged trees. Half a day’s work usually runs out at around $1000. So I estimate maybe $2-3000, or more, to clear my place. It’s all fantasy anyway. I suspect all the tree people around here will be already booked out for the next three months or more.

It seems there are government grants available to people who had no electrics. A first glance shows that the conditions are such that we are not eligible. I hope some of those people in the Dandenongs, who will be without power for maybe more than a month, get some help. I will contact my house insurance company, but assume they will have conditions also.

After settling into the reality for a few days I have a careful look around. By the grace of Zephyrus, god of the winds, all buildings were undamaged. But my property used to be a one-teacher school, with some beautiful old trees, and almost a hundred years’ worth of park-like land. By coincidence, a few days before the storm I was admiring the perfect shape of an old lilli pilli, grown large and roundly beautiful with age. Now half of it is missing. Much of it is hung up on itself; a few forlorn skinny sticks reach up out of the mess.

"It all feels so personal – so many of my living companions, now amputees."

When we came here twenty-five years ago I grew three mountain ash trees and I have since been astounded at their rate of growth, how they reached for the sky. One has now lost its top half. All that remains is a trunk – no small branches, no leaves. And I was so proud, being a non-gardener, of three pittosporum bushes I grew several years ago. They were up to two metres high and luxuriantly thick and healthy. One tree hit two of them. It all feels so personal – so many of my living companions, now amputees. But the good news is that another living companion, the resident koala, was sounding off the next day – sounding grumpy if I am any judge of koala language.

Over the past few years, we sat back, undamaged from the disasters. The fires that ravaged the coast of Eastern Australia; followed by floods in NSW. All supplemented of course by Covid, which was not much of a problem in this isolated place – life was almost normal except for having to wear a mask at shops. The ancient gods had missed us up until June 9, but now they have had their say, and we have our personal disaster. Climate change in action? Those who deny its reality and its consequences have obviously not been exposed to its ugliness.

Today, I left a reverse cycle heater on all day, just for the sheer joy of it.

Postscript: I finally discovered I was eligible and did receive the grant for people who went without electricity for more than a week.

Owen's pottery was showcased in Gippslandia #18, which you can read here.

His latest book, Beyond Short Street, is being published by Australian Scholarly and is set to be released very soon. Stay tuned for the launch dates of this engrossing new read.