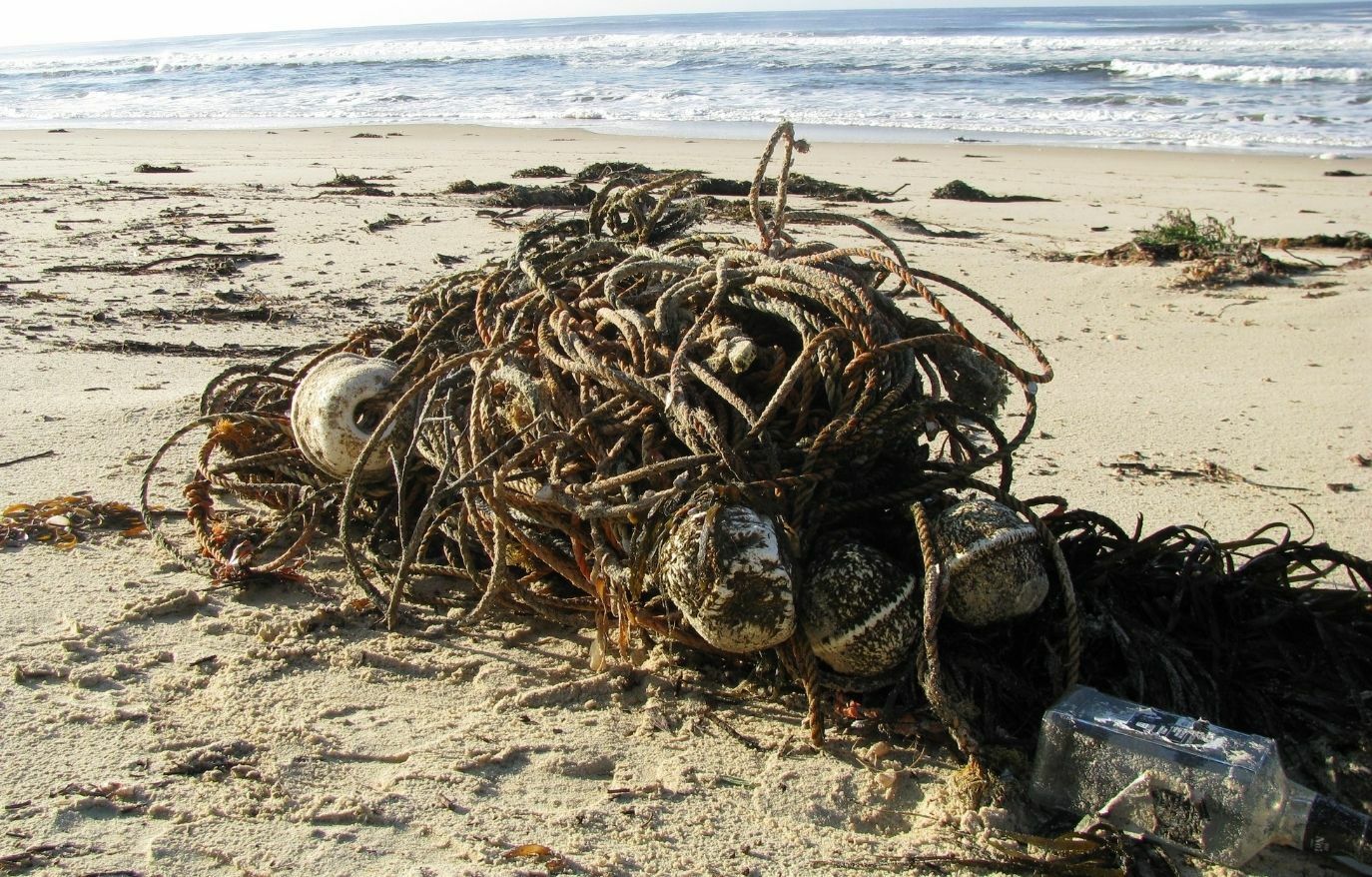 Neglected by humans. Transported by ghosts. Made art by Aaron.

Aaron Shead creates witty in situ pieces from marine debris, highlighting the need to have urgent conversations about our waste.

As you immerse yourself in East Gippslandian Aaron ‘Az’ Shead’s sculptural works, you begin to admire the dynamics of the vast differences in scale that are in play and the urgent conversations we need to have about our waste.

A sesame seed, roughly five millimetres wide, is the upper size limit for what is deemed a ‘microplastic’, yet their prevalence throughout our oceans is having disastrous effects on the marine food web. Tiny dots of our plastic are harming whales, our largest neighbours on Earth.

We all have an understanding of how much plastic or non-biodegradable products have infiltrated our lives — you only have to look around the room right now. Az’s walks along stretches of remote East Gippsland beach result in him collecting huge volumes of marine debris of all kinds. Australia, alone, has over 35,000km of coastline. The ocean currents that carry the marine debris Az picks up, described as ‘powerful ghosts of the sea’ by those who track them, function at a much larger scale and are eventually driven by the planet’s weather systems.

You quickly realise that we have a major problem. Yes. Yes, we do.

The point where several large ocean currents culminate, a gyre, in the north Pacific infamously has The Great Pacific Garbage Patch, a 1.6 million sq kilometre area of floating marine debris. And there are multiple similar garbage patches in all the world’s oceans.

Most people will feel overwhelmed by the scale of this problem.

But Az is doing something about it.

“As overwhelming as marine debris [is] and the effect [it has] is, each piece recovered is a piece that is not doing harm”. 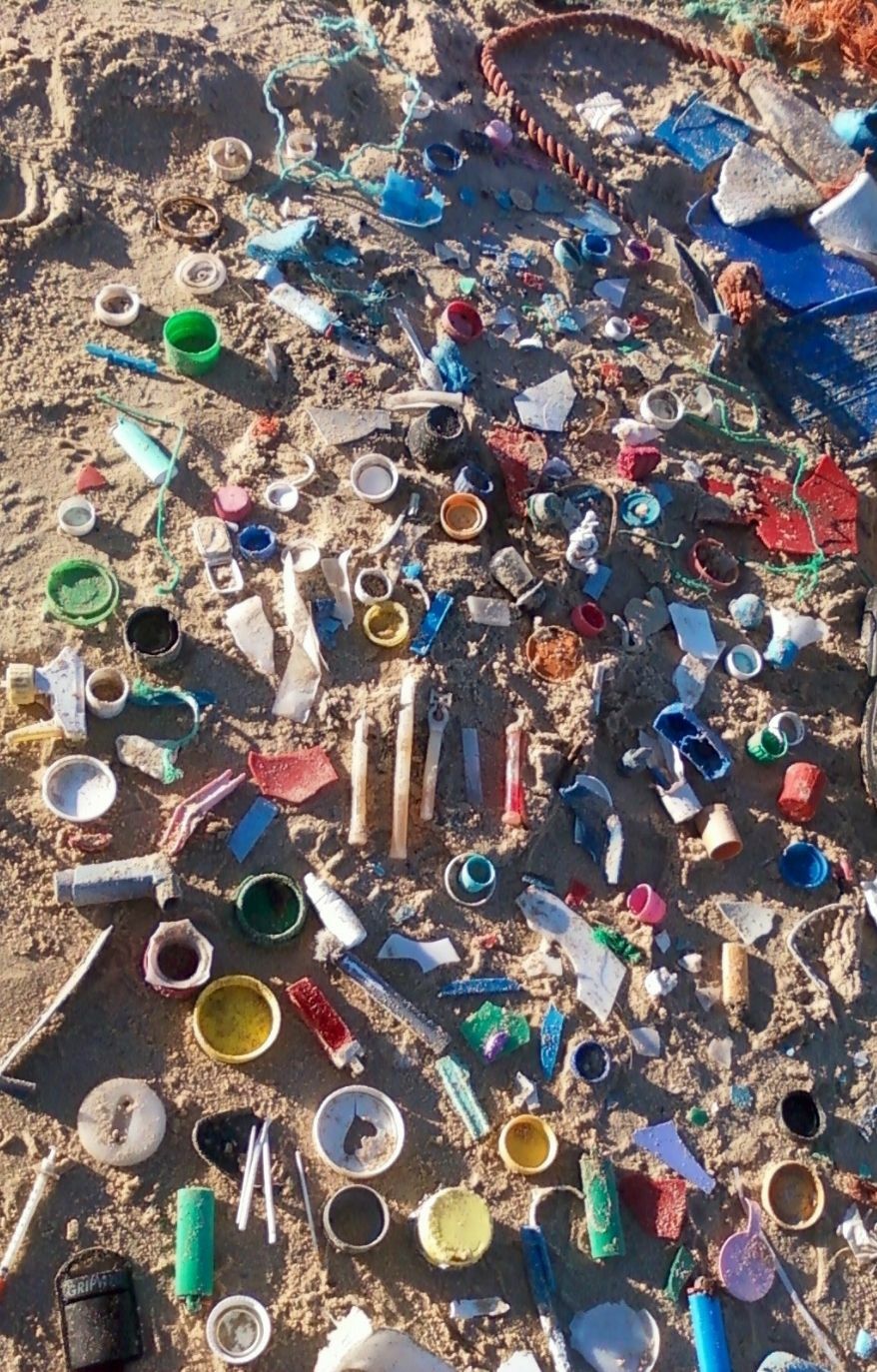 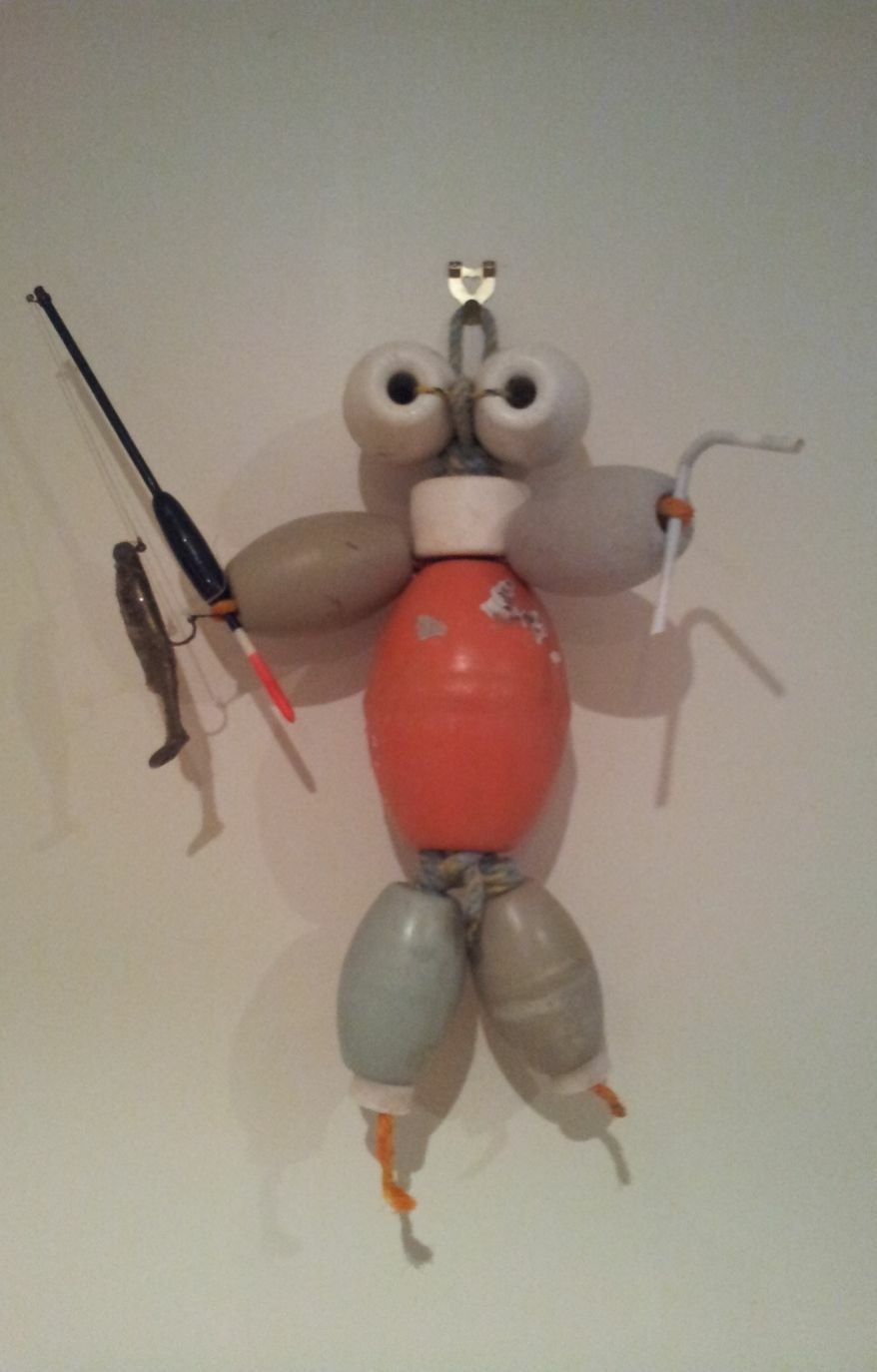 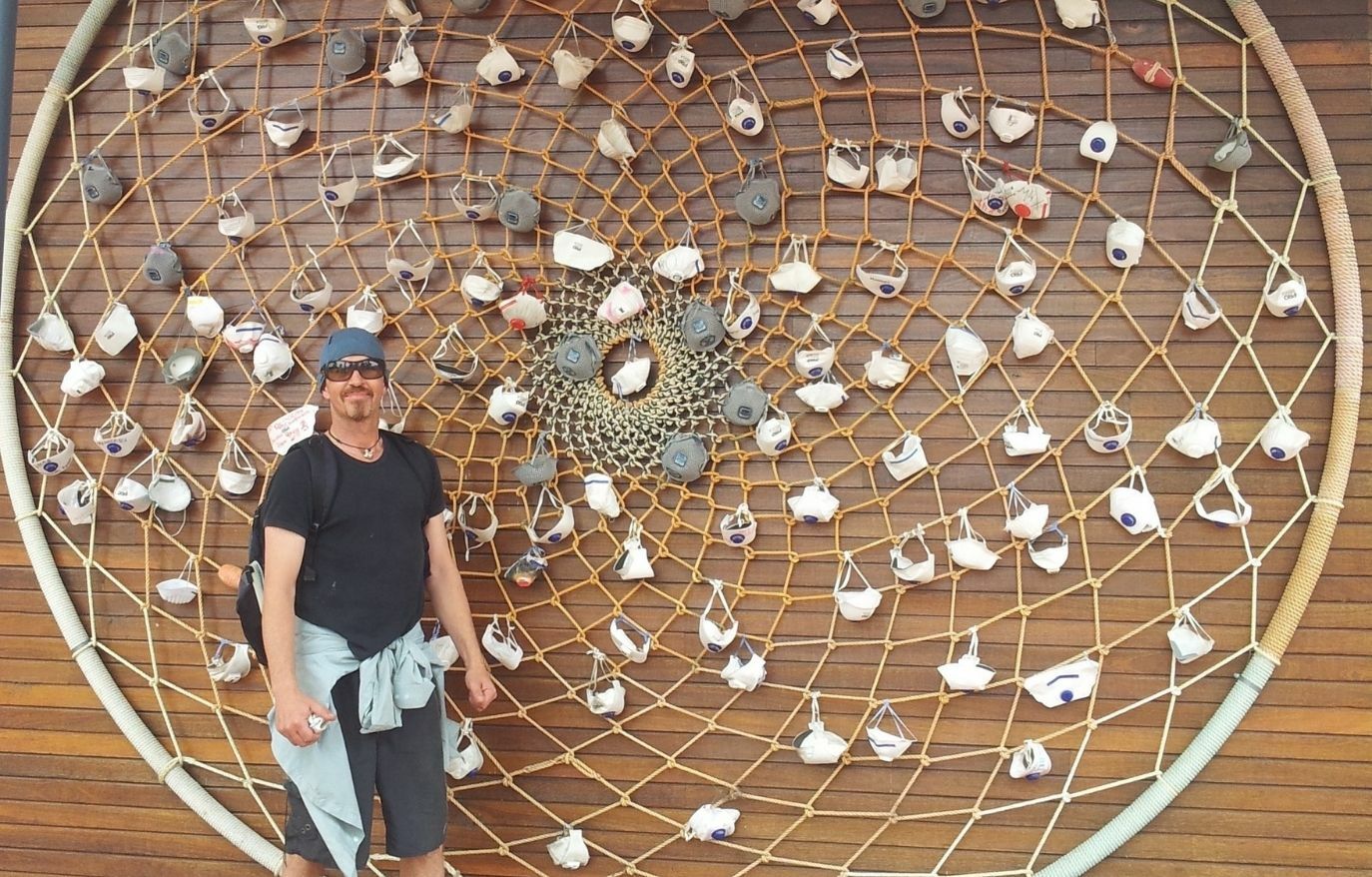 Observing the functioning of the planet’s natural systems is absolutely key to Az’s concept of ‘Earthbins’, as he explains:

“They all have natural accumulation points, where the bulk [of debris] is concentrated. These locations can be utilised to maximise efforts when recovering our lost or discarded rubbish. The earth bins the rubbish, we only need to find these natural bins and empty them. Hence, ‘Earthbins’.

“For nine years, Earthbins have been cleaning rivers, lakes and coastlines from the Snowy River to Howe Bay across the New South Wales border. There is certainly plenty of rubbish on the streets that slows us down getting to the more remote locations.”

Az’s artistic practice is derived from his time collecting waste from the Earthbins, as he strives to make the wider public more cognisant of the dire plastic problem.

“I saw some of my late mother’s dreamcatchers that she had made for friends and family still on their walls. This prompted what could be done on a large scale with a huge stockpile of rope and buoys accumulated over the years: marine debris awareness art. I’d made a few other things prior, a 100% marine debris stringed instrument among them.

“The original marine debris dreamcatcher can be seen on display on the front of the Mallacoota Art Space; it’s been on the front of the building for four years now... And there’s another five-metre weave that was on the roof of the community hall for some time.

Az has also created witty in situ pieces from marine debris, including the Buoy Boy and guitar.

“As a singer songwriter, I’d prefer to be singing and writing than making art from toxic plastic.

“Plastic in the ocean acts like a magnet and attracts like chemicals to its surface, up to 100 times the volume that originally constituted the piece of plastic itself. We need to break plastic back into its original elements and not make it again. Recycling is a re-proliferation passing on a problem.”

"Plastic has helped bring us out of the Dark Ages, but its mismanagement could be what takes us back there."

“Hopefully we start to mine our own plastic for its resources. It can be used to provide carbon in the steelmaking industry, for example. Consumers are choosing glass over plastic and natural over synthetic, these are all part of a possible solution. An obligation on producers to do the same would speed things up.

“The realisation that the food chain could well collapse before the climate does prompted the idea for a plastic tax. Which I was surprisingly the first on the planet to reply to an Instagram picture with the hashtag #plastictax (a half fish-eaten Pennzoil container). The United Arab Emirates and other countries have since implemented taxes on single-use plastic.

“A tax that literally made single-use plastic economically non-viable would be a good start. Plastic has helped bring us out of the Dark Ages, but its mismanagement could be what takes us back there.” 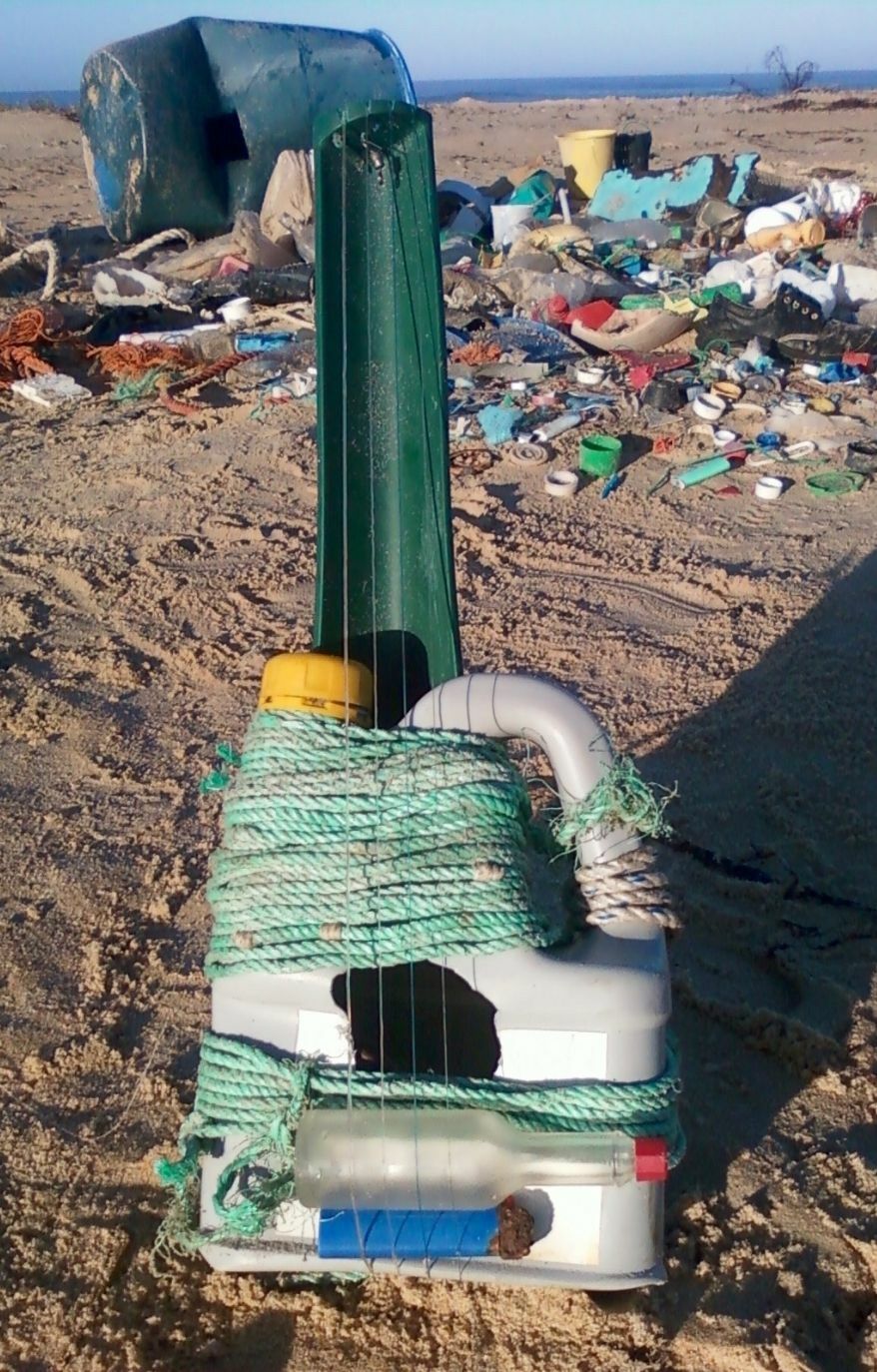 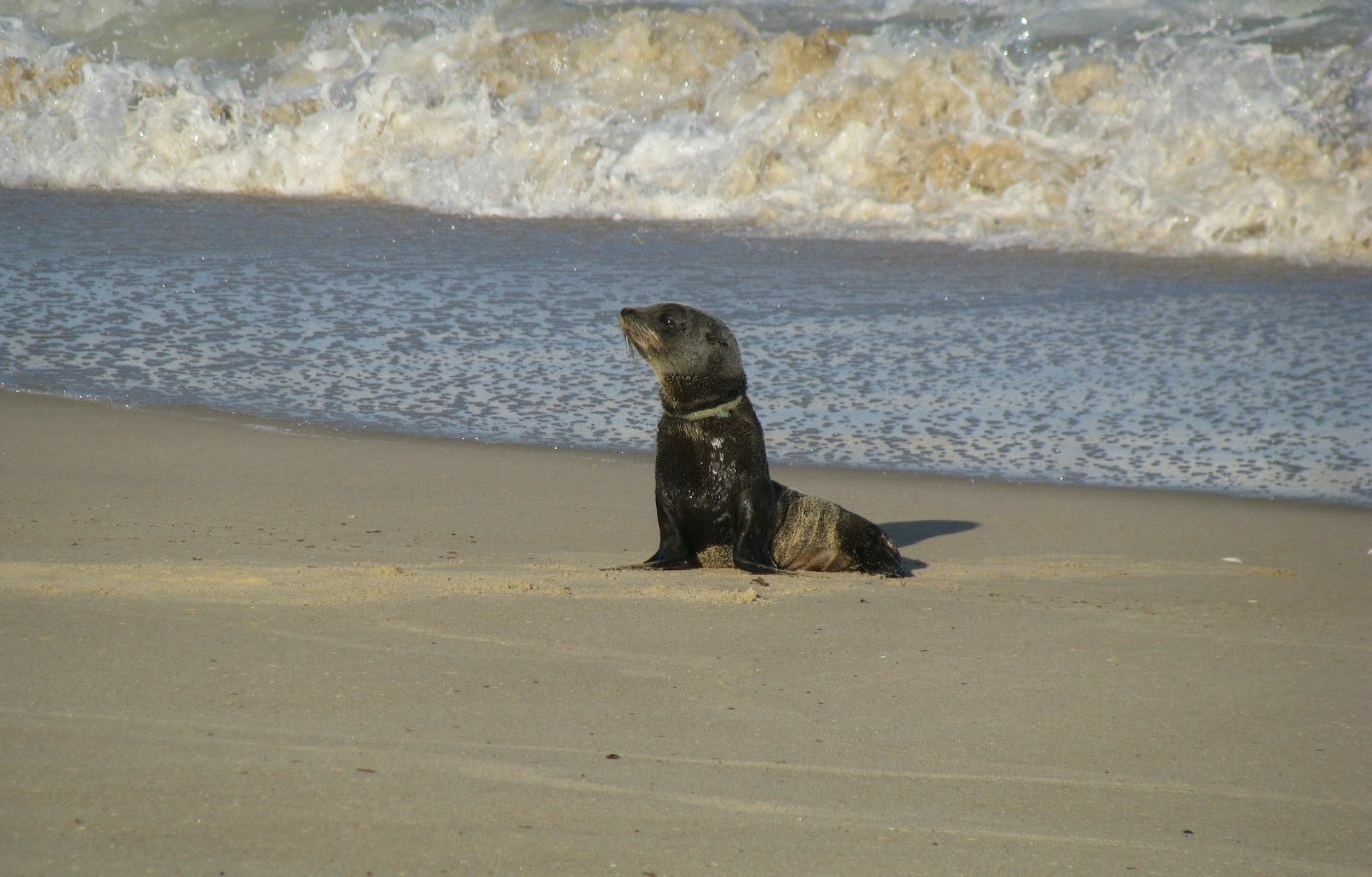 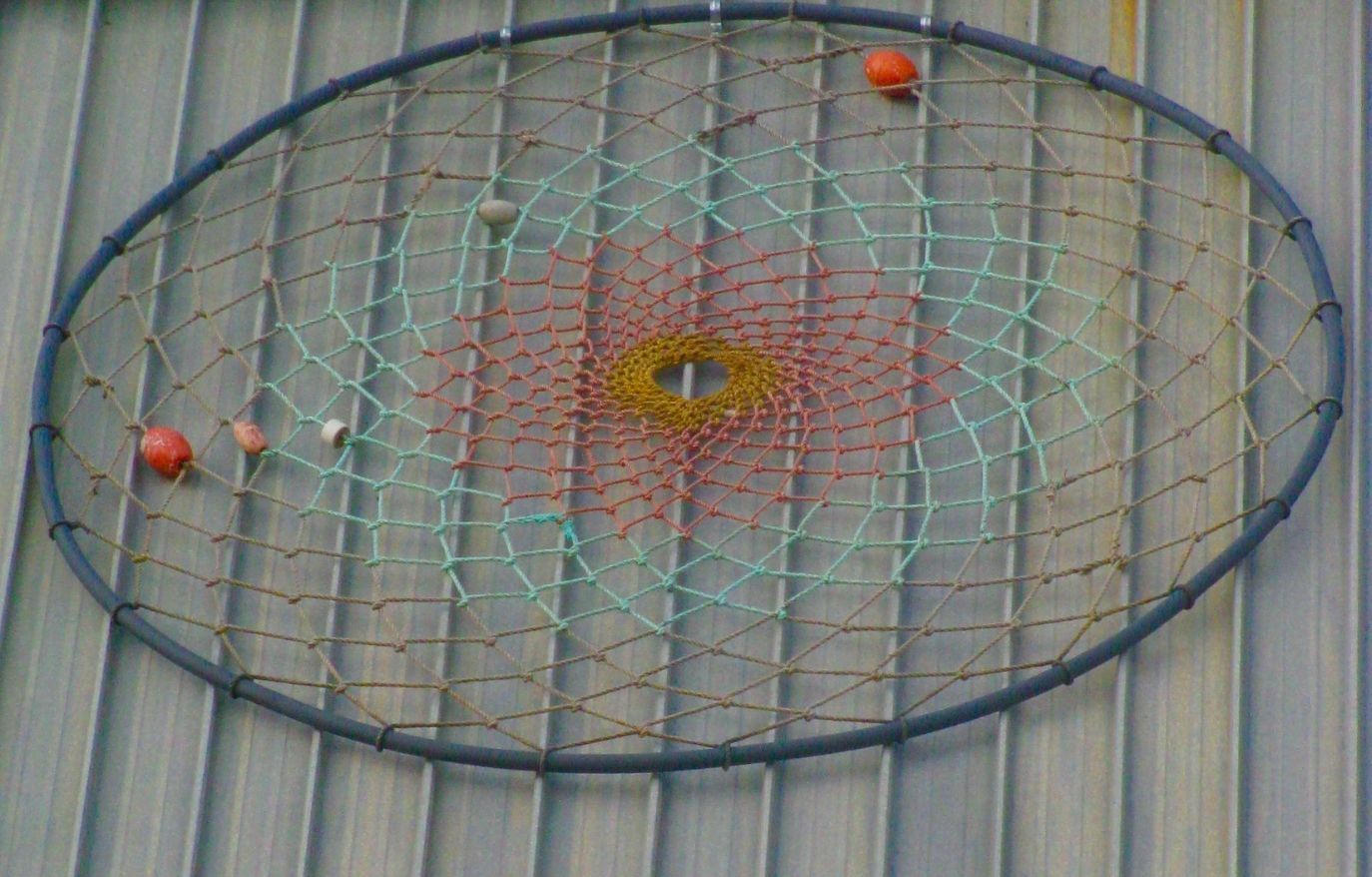 Az moved to East Gippsland when he was eight years old. He explains, “My mother was enticed to move here from Northern New South Wales by a family that had come to love the area.”

The ties to the landscape are bound tighter, given all the time Az has spent roaming through it, leaving solitary footsteps on some of Victoria’s most remote beaches. Az shares that he’s been fortunate enough to witness sea eagles, dingoes, echidnas, amazing sand stars, Australian fur seals, a giant sea lion and more on his walks along this special coastline over the years.

“Once out on a remote part of the wilderness coast, two unmarked grey helicopters (Australian Army) came straight towards me when up in the dunes amongst a huge pile of rubbish (washed in fish bins, and sacks full of plastic, piles of ropes and buoys). I raised an arm and gave a wave. They proceeded to cross over each other in an opposite ‘S’ formation.

“I was later explaining this experience to an Army sergeant training recruits in the area. I was told that that maneuver is called the ‘double helix’ and is the highest sign of respect that can be given. The sergeant said, ‘They know exactly who you are and what you do’.

“I liked the idea. Perhaps they were just waving back.”

Not all of Az’s stories are as heartening. In fact, the tale related to the young seal caught in a fishing net (pictured above) is absolutely heartbreaking.

“It was my hardest day on the wilderness coast. I was unable to get to the seal. I saw it on a weekend and a long way up a remote beach. As soon as I returned to mobile range, I informed local authorities and Parks and Fisheries about my sighting. There wasn’t much we were able to do, as there’s no one in town with a tranquilliser permit.

“I went out early the next morning with plans to shoo it back down the beach myself, where I could perhaps get some help for it. Unfortunately, it wasn’t there. A grim outcome, as it was destined to outgrow the choking net square. A slow way to go. Just horrible.”

Az’s art is distinctly of its place. It feels as though it emerged out of passion for the East Gippsland wilderness. Yet, regrettably, too many of our beaches are losing a battle with plastic waste. To appropriate a quote from Batman: The Dark Knight, this may not be the art that Az would prefer to create, but it is the art we need: marine debris awareness art.

Az’s efforts in trying to stem this grim situation are heroic too.

As this year has shown, more than any other in recent memory, not all heroes wear capes.

What will you do to help?

You can find Aaron Shead’s work on Instagram at @earthbins.

Plasticadrift.org is an excellent visual portal into viewing the effects of the ocean currents on plastic waste.