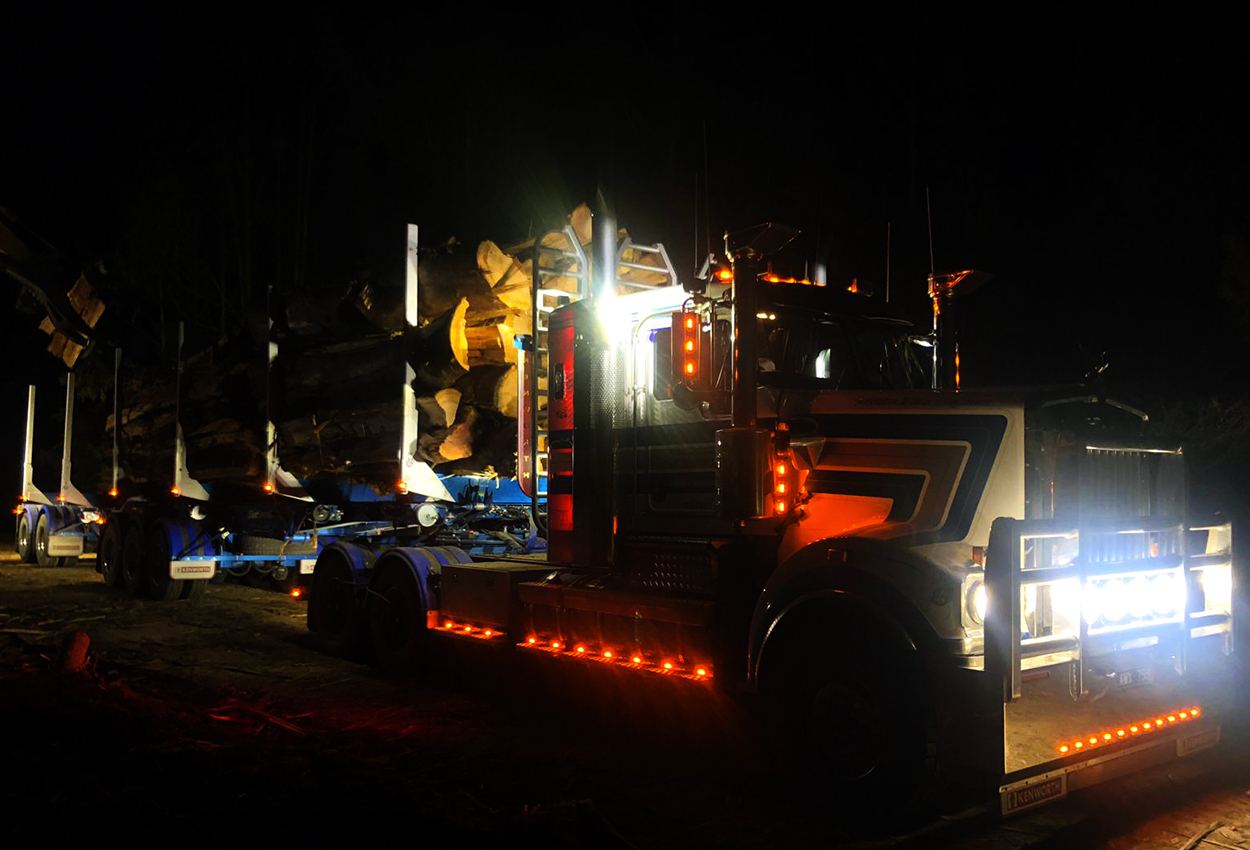 A pencil, a truck and a lot of laughs.

Michael Duncan jumps in the cab of Gippsland trucking royalty, Luke Blackwood, for a new experience of our region.

When you think of truckies there’s a simple description that generally comes to mind: big, burly blokes. At 1.00am on the first day of summer, I sat by the side of the bitumen and waited for a brand new Kenworth rig to see whether the assumptions were true. By the end of my road trip, I was surprised to discover my chauffeur was an excellent tour guide for Gippsland. —

The local truck operator who agreed to have me in the passenger seat was Luke Blackwood, and in the first hours of the new day we set off on an adventure to parts of our region I’d never seen and by a mode I’d never travelled.

Our conversation started with my complaining of having just two hours’ sleep, to which I was quickly informed by my witty chauffeur, who was controlling the 600 ponies (horsepower) pulling the truck, that you can get a lot of sleep in two hours.

Let me set the scene to this road trip: Luke is a member of Gippsland trucking royalty, having grown up in his father’s trucks (there are four). He first drove one as an eight-year-old (let’s keep that between us) and is living in a street known as Truck Whisperers Lane. Luke’s father, Dave, learnt to drive from his father, Norm, who instilled a passion for the trucking way of life in the family. Even Luke’s younger sister, Hannah, is now behind the wheel, driving for her uncle, Chris Blackwood, at Latrobe Valley Sands.

As a youngster, every spare minute was spent on ‘truck stuff’. Luke learnt everything on how trucks worked, how to drive them and how to wash them. He recalls that he used to wash his neighbours’ trucks all weekend — a solid effort when you consider they had 10 trucks. This allowed him to pay for his first car as a 16-year-old, with $20,000 cash. Now, at 27, Luke has just bought his second truck and is carving his own path while respecting the family tradition.

Luke possesses an insatiable work ethic, yet when asked about his occupation, he replies, “I love heading up the bush. It’s beautiful up there. It’s pretty much my job and my hobby”.

Physically, Luke partly fits the traditional truckie description; he’s big — we’re talking about six foot and eight inches (203 cm) tall. But he doesn’t rock a burly nickname, has tattoos, lives off meat pies or even has a beer gut. Instead, he’s known as ‘Pencil’ or ‘Hatrack’ due to his slender stature and can be found enjoying a smoothie bowl at Nielsons in Traralgon when he’s not motoring about the countryside. He’s a true gentleman, dead-set larrikin and a reasonably good coffee maker.

As we smashed out the kays in the pre-dawn light, he hit me with his tips on a side of Gippsland you may not have seen. I hope you enjoy them.

The high country, especially Matlock. I love the serenity and the trees (Luke drives an eco-friendly truck that has reduced emissions). Only 1% up there has been logged.

The best place to catch a sunrise?

Across the top of Neerim South, the sunrise is stunning. They call it the ‘Mad Mile’.

You love the bush, if you were running a tour company where would you take people and why would they go?

Noojee is pretty cool, It’s got places for camping, the pub and the Toolshed to eat, and a good coffee shop.

Name a few towns in Gippsland that you frequent, but that other people probably haven’t heard of?

The McAdams Gap pub, up near Matlock, is a classic old school pub that you can get a traditional feed and stay at.

Little Red Duck Cafe in Noojee and Fozigobble in Yarragon.

Go-to feed on the road?

Yarragon Milk Bar. Their salad roll is a showpiece.

Middle Pub, Korumburra, already had one there this week!

The Toolshed in Noojee.

Best spot for a picnic?

Omeo highway between Bruthen and Swifts Creek. Find a spot along the Tambo River.

What goes into the picnic?

My partner, Danielle, brings a tub of fruit and a chicken salad, without chicken, which you put tuna in instead. As well as a couple of muesli bars and bananas.

Is the Gippsland Panther real?

I’ve never seen it, but I’m a believer.

What about wildlife... Surely you see a bit? Favourite? Where do you find it?

Lots of deer. They’re the favourite. You see lots of them up past Rawson.

When you’re on Gippsland roads this summer, you’ll undoubtedly see a Blackwoods truck. Whether it’s one of Luke’s, his old man or one of his uncles, Mick and Chris from the Warragul area (not Uncle Gary though, bucked the trucking tradition and is the Member for Narracan), make sure you give ‘em a wave. They’re good gents and they’ve got some great tips on finding some of Gippsland’s best-kept secrets.