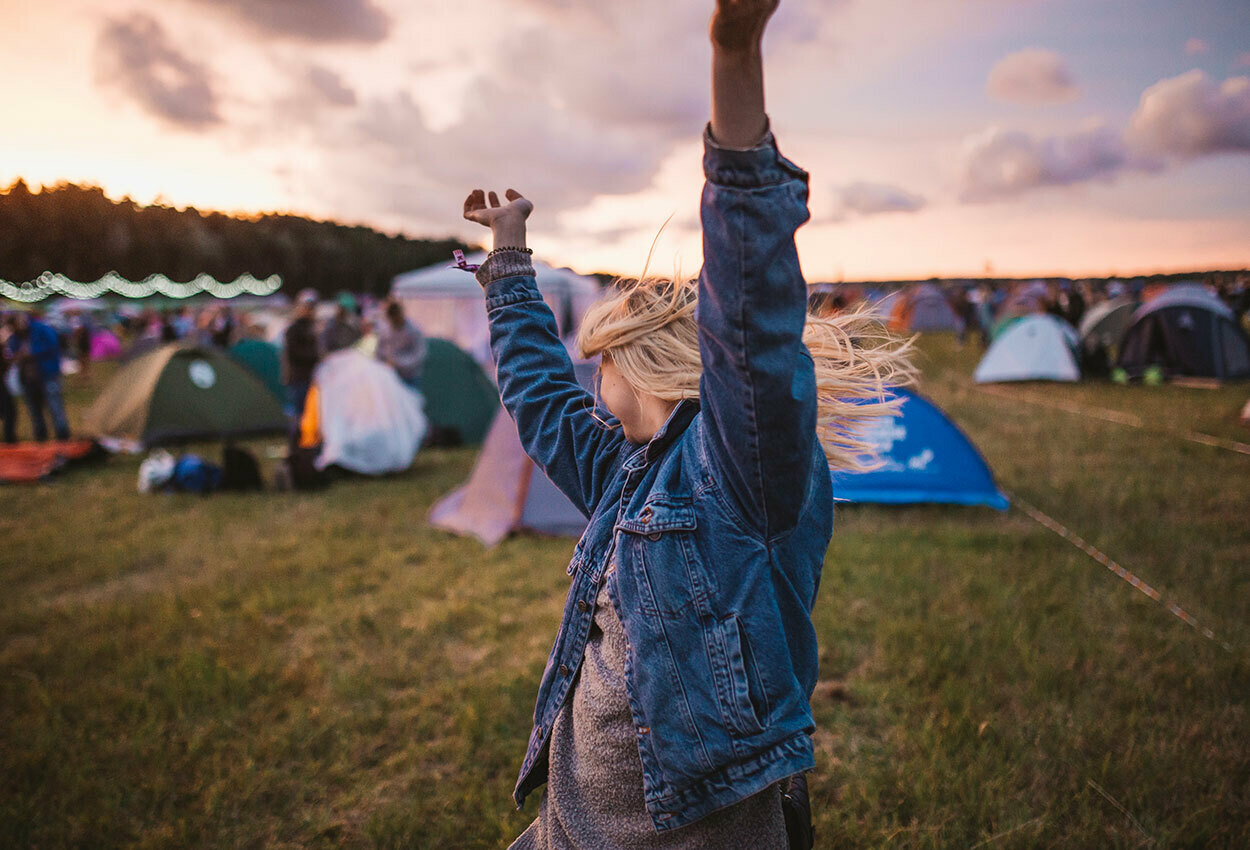 A Festivus for the rest of us.

With another year drawing to a close, you’ll likely begin receiving the odd query on ‘What’s on the cards for 2020?’ or ‘Do you have any New Year’s resolutions?’

With another year drawing to a close, you’ll likely begin receiving the odd query on ‘What’s on the cards for 2020?’ or ‘Do you have any New Year’s resolutions?’ Don’t reply with a bland ‘The usual’, the non-committal ‘We’ll see’, or the evasive ‘I haven’t given it a second of thought’. Thanks to our list of global festivities below, you can respond with, ‘In February, I’m off to dodge fireworks in Taiwan for Feng Pao’. Pause, then enjoy their startled reaction as they realise, damn, you’re exciting!

With the icy wilds of Siberia just next door, dropping average winter temperatures down to -17°C, you probably need a cold weather activity. The industrious and creative people in Harbin cut metre-thick blocks of ice out of the Songhua River to construct buildings and sculptures. Apparently, in 2019 the Ice and Snow World section of the festival took up over 600,000 square metres and included more than 100 global landmarks. It was made from 110,000 cubic metres of ice and 120,000 cubic metres of snow. Enough for snow angels for days!

Ever wanted to stare down thousands of fireworks as they come flying at you? Then Feng Pao, one of the world’s most dangerous festivals, is for you.

Apparently, in the late 1800s, a cholera epidemic had broken out in the area. It is said that to drive out the evil spirits and ward off the disease, survivors invited the spirit of the Chinese god of war. The god has a thing for firecrackers, so everyone fired off masses of them and the epidemic soon receded. The region has celebrated their gratitude ever since.

The main attractions are the so-called ‘beehives’ fireworks, essentially multiple bottle rocket launchers. Thousands of bottle rockets are arranged in rows atop an iron-and-wooden framework — a beehive full of gunpowder. When the contraption is ignited, rockets shoot out rapidly in all directions. Locals believe that being hit by a rocket is an indication of good luck in the year to come, and the greater the number of hits, the greater the luck. Get that protective gear on, you lucky fish.

A ‘Day of Silence’, Nyepi is a day reserved for self-reflection.

The normally bustling island of Bali becomes a ghost town as restrictions are placed on lighting fires (and lights, generally, must be kept low). There is no working, no entertainment or pleasure, no travelling and, for some, no talking or eating at all.
Although Nyepi is primarily a Hindu holiday, non-Hindu residents and tourists must conform to the restrictions (and the traditional Pecalang police it). You are free to do as you wish inside the hotels, but no one is allowed onto the beaches or streets, and Bali’s only airport remains closed for the day.

The term ‘songkran’ relates to movement in Sanskrit. The period that Thai people celebrate nationally is referred to as Songkran and happens when the sun moves from Pisces to Aries in the zodiac, signifying the solar new year in Southeast Asia.

Thai people perform water pouring on Buddha statues, and the young and elderly, as a traditional ritual on the Songkran holiday. It represents purification and the washing away of one’s sins and bad luck. This has escalated into huge water battles, especially in the northern city of Chiang Mai, where the main traffic intersections and the region adjacent to the Old Town moat are filled with people of all ages going nuts with water pistols, water balloons and buckets.

Hari Raya Aidilfitri or Eid al-Fitr, ‘The Festival of the breaking of the Fast’, is a religious holiday celebrated by Muslims that marks the end of Ramadan. The joyful celebrations are loud, raucous, and — after a month of abstinence — well-deserved.

It’s important that families celebrate the festival together. People tend to dress up in traditional attire, and then there is the food! In Malaysia, people invite friends and family to their home to enjoy traditional delicacies like the ketupat (rice dumpling cooked in palm leaf), rendang (meat stewed in spices) and dodol (sticky, soft, toffee-like sweet).

Three-to-five million people join in the annual celebrations of the São Paulo parade every year, making it the Guinness World Record holder for the biggest pride parade in the world. It draws as many people, and frequently more than, the Rio Carnival.

It has consistently grown since its inception in 1997 where 2,000 people were involved, to cracking the one million people milestone in 2003, to the immense numbers now. Apparently, the influx of tourism generated by the parade brings in over $60 million to the region. The city’s coffers must be happy that the LGBTQ app Grindr declared the parade the best in the world.

Initially, you may be out of breath due to the high altitude of the Andes, but as the vibrant Fiesta de la Virgen del Carmen (Our Lady of Mount Carmel) kicks into high gear, we feel the dazzling costumes, masks and dancing whirling around you will be leaving you breathless too.

Tradition has it that the roots of the festival stem from when a wealthy young woman, while on her way to Paucartambo to trade a silver dish, found a beautiful (if bodiless) head that spoke to her once she’d placed it on the dish. Arriving in the town, people gathered around her and witnessed rays of light shining from the head, and henceforth it was honoured with prayer, incense and a wooden body for it to sit on.

The La Tomatina legend begins with an angry music performer in 1945. The performer’s mask fell off, triggering his tanty, which escalated in people throwing vegetables from a market stall at each other.

Some young people thought it was so much fun that they started throwing tomatoes again the next year. Even though they were eventually arrested, they managed to launch a tradition that has become the world’s largest food fight, as around 40,000 people throw close to 150,000 kg of tomatoes at each other.

It’s said that the citric acid in the tomatoes leads to the washed surfaces in the town becoming very clean...

In Zulu culture, September 24 was a time to commemorate King Shaka Zulu. Then, with the advent of democracy in the mid-90s, it was suggested that the date become Heritage Day, which celebrates South Africa as a ‘rainbow nation’ of many cultures.

Then some guy named Jan, who really loves braais (BBQs), came along and suggested that as all South African cultures relish in cooking delicious feasts over fire, Heritage Day should be National Braai Day. That Jan loves braais so much that he now goes by the moniker Jan Braai. Lekker, boet

It’s widely believed that many Halloween traditions originated from ancient Celtic harvest festivals, particularly the Gaelic festival Samhain, which also marks the arrival of winter and the ‘darker half’ of the year in the northern hemisphere.

‘All Hallows Eve’, which morphed into ‘Halloween’, was a time in the Christian calendar dedicated to remembering the dead, including saints (hallows), martyrs, and all the faithful departed. Note that the Mexican celebration, Dia de los Muertos or Day of the Dead, occurs on November 1.

Diwali is the popular Hindu festival of lights. Typically lasting five days, Diwali symbolises the spiritual ‘victory of light over darkness, good over evil, and knowledge over ignorance’. The festival is widely associated with Lakshmi, goddess of prosperity and wealth.

Leading up to Diwali, celebrants will prepare by cleaning, renovating and decorating their homes and workplaces. During the climax, revellers adorn themselves in their finest clothes, illuminate the interior and exterior of their homes with diyas (oil lamps or candles), offer puja (worship) to Lakshmi, light fireworks, and enjoy family feasts.

You’ve got to finish off the year with a bang, and Hogmanay celebrations in Edinburgh are billed as one of the world’s greatest New Year’s parties.

The roots of Hogmanay perhaps reach back to the celebration of the winter solstice among the Norse, as well as incorporating customs from Samhain (see Halloween). So, it may come as little surprise that Hogmanay frequently involves fire (like burning a Viking boat), eating rich food and drinking whiskey, making for a very happy New Year!