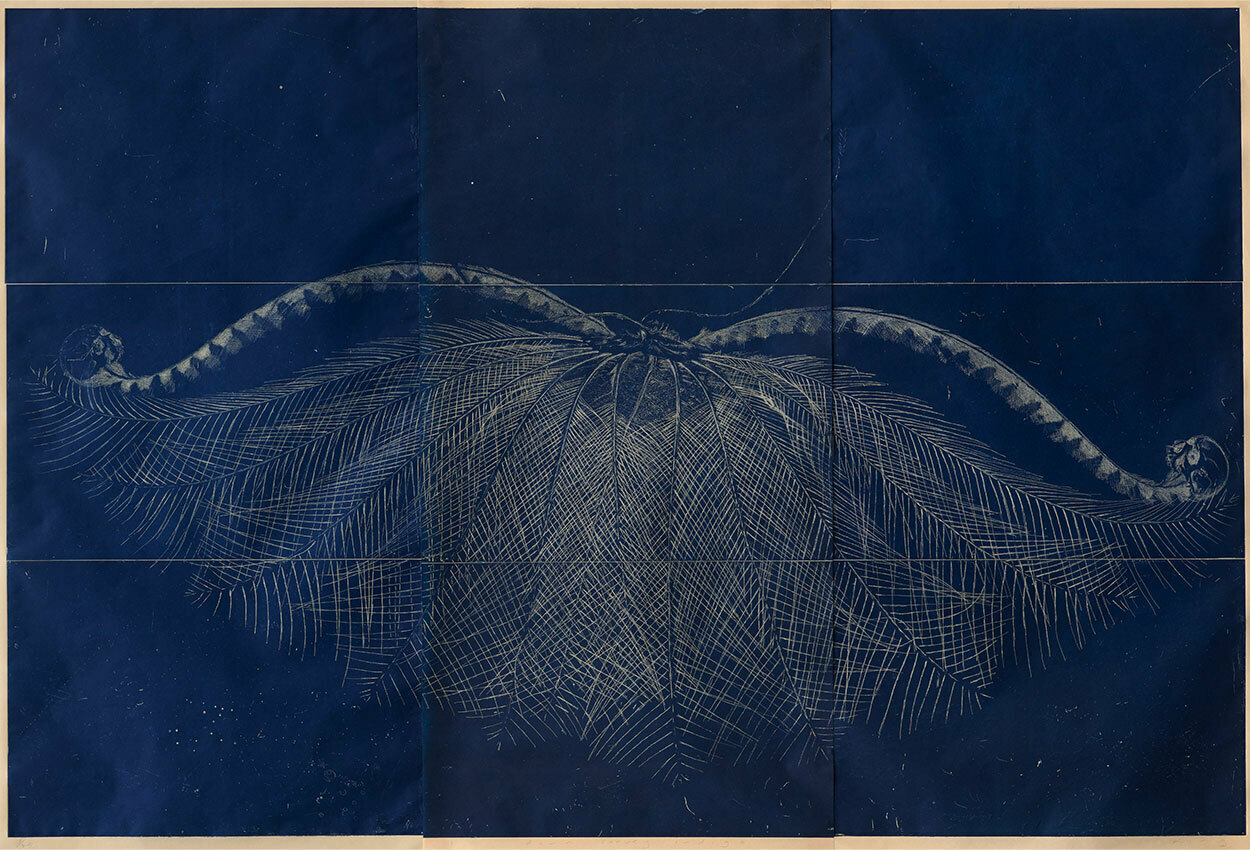 A fascination with birds has been a seam running through Martin King's work since the very beginning to now.

Martin King isn’t quite sure where his fascination with birds began. Yet, birds have been a seam running through his work since the very beginning to now, and it was a lyrebird that featured in Martin’s stunning relief etching, Dawn Survey - Indigo (2015), that won the inaugural acquisitive Gippsland Print Award four years ago.
—

Drawing was one of the first things that Martin was interested in as a child. He would spend weekends copying images that he found in magazines or newspapers onto fresh paper.

While still a youngster, Tynee Tips tea bags began to include a collectable bird card in every box, and Martin remembers spending a lot of time shuffling them around and redrawing some of the images.

It was during his first year in art school at Caulfield Tech that Melbourne-born Martin was introduced to printmaking etching.

When talking about what attracted him to the medium, he shares that, “I just found the whole process really fitted my way of going about making art. I’m sort of a ‘process’ person, so [I liked] the fact that you had to develop an image via a process, rather than just putting paint directly onto canvas”. Martin liked that it included his passion for drawing, but that his drawing was modified or transformed by the process that really suited the way he wanted to develop his imagery.

“I wasn’t exactly sure how that might develop, but… I found it sort of captivating and compelling.”

Martin explains that he’s undertaking what is essentially a drawing practice. For him, printmaking is drawing too, as you’re inscribing marks into a plate, onto a litho stone, or carving it away. But as the marks he can generate through printmaking are different and unique to the process, it’s creating a feel in the works that he couldn’t get by just applying a material directly to paper or canvas.

Being able to reproduce prints is not a key attraction for Martin, instead it’s the ability to print an image in a multitude of ways. For example, he explains that for Dawn Survey - Indigo, he essentially created an intaglio etching, but then printed it as a relief etching, that “gave the sort of magic I wanted”.

“You know I’ve got one image or one plate or one matrix but depending on how I ink it, what colour I ink it or how I treat it afterwards… I’ve got this possibility of using an image and talking about different things. Rather than just fixing that image and printing it like a photocopier.”

Martin continues to explain the tale behind the creation of his winning artwork.

“It was when I was younger, eight or nine, that I saw an image of a lyrebird in a newspaper. I was captivated by it. I could see the tail feathers. It was sort of in display, as a sort of profile… silhouette profile. I thought the tail feathers looked like human skulls right at the end, even way back then.

“When I was developing some new imagery I thought the lyrebird is a very cliched, iconic image, but I was compelled to use this type of image. I thought I’d play around with a fictional perspective… an imaginative sort of thing.

“I liked that I could embed the human skull into the tail feathers, but that it looked like it was meant to be there. It’s a slight twisting of reality.

“I did a lot of research. I went to a sanctuary and studied the bird. I also went up into the Dandenong Ranges with a group of enthusiasts and volunteers to do a ‘dawn survey’, where you count the number of lyrebirds for research. Hence the name.

“I developed the imagery around the research, but also with it is more of an imaginative look. The beauty but also the structure… The fact that it’s displaying like that, you don’t actually see it as a bird, it’s more like this shape or kind of an abstract thing.

It suited my purposes to make it slightly ambivalent, obscure, but also beautiful and a little bit compelling.”

Martin says that winning the prize offered by the Gippsland Art Gallery was a “thrill” because he is wanting his work to speak beyond the confines of his studio walls. Given that the prize was a jury-based process, winning is an affirmation that there’s something about the work that’s speaking to someone.

Gippsland’s natural beauty conjures fond memories for Martin, as his brother lived in the region for many years. Martin’s also frequently exhibited in regional areas during the course of his career. He wonders why there aren’t art schools in such beautiful areas. That there’s no reason why an artist needs to be in a metropolitan area to study or make good art.

Martin concludes, “The regional galleries are kind of crucial… Artists don’t only come from the city. Artists are born everywhere. So to have a really thriving, regional fine arts energy and scene, I think is critical and it just needs to be supported.”